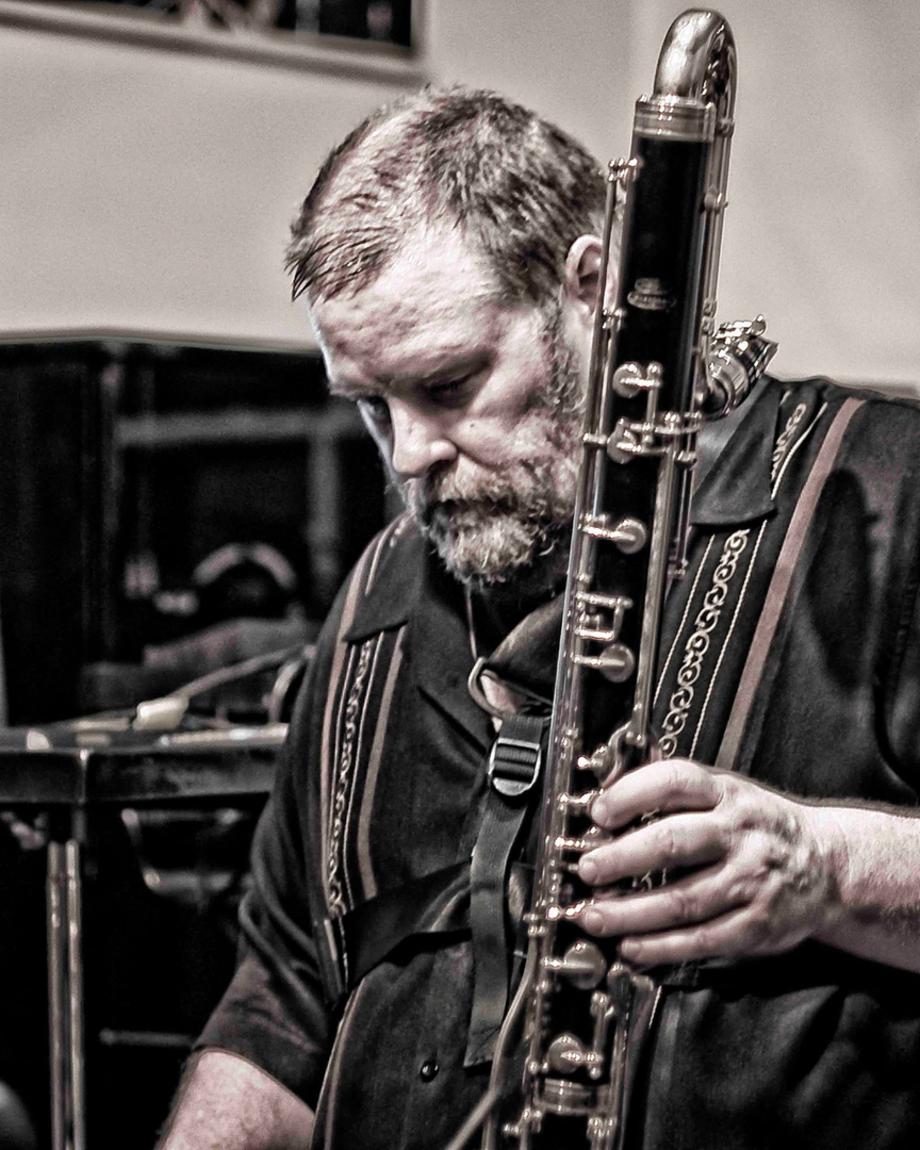 PEK (aka David Peck) is a multi-instrument improviser who plays all kinds of instruments including saxophones, clarinets, double reeds, percussion, electronics and auxiliary sound making devices of all kinds.

PEK was born in 1964 and started playing clarinet and piano in elementary school.  In 7th grade he started saxophones, first on alto, then switching to tenor in high school.  He spent 10 years playing in rock bands and studying classical and jazz saxophone with Kurt Heisig in the San Jose CA area before moving to Boston in 1989 to attend Berklee where he studied performance with George Garzone.  While Berklee was an excellent place to study harmony, voice training and other important aspects of a conventional formal music training course of study, it was not a very good environment for learning contemporary (or pure) improvisation (apart from his work with George).  PEK did find, however, that Boston had a thriving improvisation scene, and it was here that he developed his mature pure improvisation language.

PEK met cellist Glynis Lomon when they played together in the Masashi Harada Sextet which existed between 1990 and 1992. They developed a deep musical connection which they continued following the MHS; first with the Leaping Water Trio for a few years and then with the first version of Leap of Faith in 1994.  Leap of Faith was very active in Boston from that time until 2001 and went through a series of several core ensembles which always included both PEK and Glynis.  Other key Leap of Faith core members during this period were Mark McGrain (trombone), Craig Schildhauer (double bass), Sydney Smart (drums), Yuri Zbitnov (drums) and James Coleman (theremin).  Leap of Faith was always a very modular unit with constantly shifting personnel and many different guests.  The early Leap of Faith period concluded in 2001 with a dual bill at an excellent room at MIT called Killian Hall with George Garzone’s seminal trio the Fringe.

At this time, PEK changed careers for his day gig, returning to college for a computer science degree and beginning to work in the structural engineering industry at Simpson Gumpertz & Heger.  He became far too busy to continue the heavy music schedule, and preferring not to do music casually, he entered a long musically dormant period.

Flash forward to early 2014.  PEK was a regular mail order customer of Downtown Music Gallery, the premiere specialty shop in Manhattan for free jazz, contemporary classical and other new music.  While in New York on SGH business, he went down to DMG and had a lengthy conversation with proprietor Bruce Lee Gallanter about the early Leap of Faith period.  He then sent Bruce a package of about 15 CD titles from the 90s and was pleasantly surprised when Bruce managed to sell nearly all of it.  This public interest in the old catalog spurred PEK into getting back into performance.  He reformed Leap of Faith with Glynis Lomon (cello, voice, aquasonic), Yuri Zbitnov (drums) and newcomer Steve Norton (clarinets and saxophones) and started to record and perform in early 2015.

Now having access to financial resources always absent in the early period, PEK began to accumulate a huge collection of instruments both for himself and also to expand the palate of Leap of Faith and the other projects soon to follow.  He acquired new recording equipment and many new saxophones, clarinets, double reeds, metal and wooden percussion instruments, electronic instruments, signal processing equipment and other sound-making devices from many cultures.  He revived his old record label, Evil Clown, and created reissues and new releases for much of the early period work by Leap of Faith and many of his other projects to sell at shows, DMG and the internet (around 100 archival titles).

The Arsenal of equipment has a grand purpose:  To establish a large scale aesthetic problem to use the instruments to make long form broad palate improvisations with dramatic transformation and development.  The very broad palate enables the long improvisations to evolve with very different movements and pronounced development over their length.  PEK started the Leap of Faith Orchestra, a greatly expanded Leap of Faith, to achieve this purpose along with a number of smaller ensembles which are sub-units of the full orchestra including String Theory (focusing on orchestral strings), Metal Chaos Ensemble (focusing on metallic percussion), Turbulence (horn players), Mekaniks (electronics) and Chicxulub (space rock).  In all, the Evil Clown roster includes over 40 musicians who contribute to one or more of the various projects, with PEK participating in all of them.  Leap of Faith has also had some special guests like Steve Swell (trombone), Thomas Heberer (trumpet), and Jim Hobbs (alto sax).  The Leap of Faith Orchestra happens whenever several of these groups play together at the same time, or the ensemble exceeds 7 or 8 players.  The Full Orchestra is a special case discussed below.

The current roster is comprised in part of:

Evil Clown is documenting the ongoing solutions to this aesthetic challenge by creating limited CD editions and digital download albums of every performance and studio session by this array of ensembles.  Interested audience can track the development of the grand scale project over the many releases – over 80 albums recorded and released so far between Jan of 2015 and March of 2017.  All of the bands are highly modular, changing personnel and instrumentation with each meeting.  The result is an enormous amount of music that shares the same fundamental improvisational language but differs from event to event greatly both in sonority (overall sound) and specific detail.

For the full Leap of Faith Orchestra, PEK composes a graphic notation score to guide the improvisation.  The full Orchestra is comprised of roughly 20 players from the roster and performs twice a year.  Two performances have occurred to date – The Expanding Universe in June of 2016 and Supernovae in November of 2016.  Composition for Possible Universes is completed and the work will be performed on May 28, 2017 with another performance (score not yet begun) scheduled for November.

The scores use a device called Frame Notation where written English descriptions of the overall sonority desired and simple graphic symbols are given durations for each player on their part along with direction on when to play and when not to play. The directions are put in little boxes called frames which are arranged on a timeline and are simple enough to be immediately understood by the performers.  Horizontal lines, called Duration Bars, extend across the page indicating when each Event (the Frame + the Duration Bar) begins and ends.  An Event can be intended for a defined group within the ensemble (for example, Metal Chaos Ensemble), a custom group (for example, Tubas), or an individual (for example, Andria Feature).

Parts are the full score annotated with Hiliters so that each player’s instructions stand out.  They can clearly see their individual instructions, but can also see the big picture, enabling far more knowledge about the pending actions of the rest of the ensemble than typical in pure improvisation. The players track the elapsed time on a very large sports clock. There is no melodic, harmonic or rhythmic information specified.  This system allows PEK to compose detailed Ensemble Events without having to notate pitches or rhythms which would require significant rehearsal to accurately achieve.