The Continuing Adventures of Damon Smih

Review by Bruce Lee Gallanter
LEAP OF FAITH With PEK / GLYNIS LOMON / DAMON SMITH / SILVAIN CASTELLANO / YURI ZBITNOV - Domains (Evil Clown 9153; USA) Featuring Dave PEK on tenor & bass saxes, clarinets, double-reeds, daxophone & percussion, Glynis Lomon on cello & auqasonic, Damon Smith & Silvain Castellano on contrabasses and Yuri Zbitnov on drums & percussion. Recorded at the Outpost in August of 2017 (last month). I dig the smaller versions of Leap of Faith since we get a chance to concentrate on the core members (PEK, Lomon & Zbitnov), who have been an integral part of this ongoing ensemble for many years. The other great thing here is the addition of bassists, an instrument not always common at LoF gigs. Bassist Castellano has been turning up at more recent gigs and ambitious bassist Damon Smith (Bay area to Texas to Boston) is the newest member to enter the picture. Mr. Smith, currently based in Boston, has been coming to NY recently and has a number of current discs with Joe McPhee, Alvin Fielder, Henry Kaiser and Weasel Walter.

As with most Leap of Faith discs, things begin quietly with ritualistic solemnity. PEK concentrates on one reeds at a time, playing what sounds like bass sax in the early section with low end drones, bowed and plucked, by both bassists and the cello. All of the members of the quintet get a chance to stretch out at length, taking their time to play longs solos, duos, trio and focused group improvs. Unlike most of the other discs by Leap of Faith, except for PEK, none of the other members switch off on other instruments very much so it easier to hear each individual part. As is often the case with LoF, drummer Yuri Zbitnov is often at the center of the storm navigating the rapids through dense, fast and slow, sparse sections. Parts of this disc are quite restrained and even calm, something we don’t often associate with Leap of Faith, yet the balance feels just right. Damon Smith, one of the finest improvising bassists around, has worked with many greats. Mr. Smith sounds especially inspired here, whipping up a storm and erupting when the energy level hits those soaring highs. If you don’t already own some discs by Leap of Faith, this is a perfect place to begin. - Bruce Lee Gallanter, DMG
- Bruce Lee Gallanter, Downtown Music Gallery

Bassist Damon Smith writes in the notes for this release, which was taped live in Oakland, California in 2008, that he likes to let recordings age: "You are very sure about the music when you live with it for a few years before putting it out in the world."

It makes sense: let the ingredients over time interact, if done right, perhaps an unanticipated richness develops around them, ideas that perhaps didn't seem right at the time turn out to be brilliant moves, something perceived as a mistake when it was played has somehow completely melted into the whole. While uncertain what, if any of these things apply here, what is certain is that Catastrophe of Minimalism is a sumptuous and intense album, sure to tickle the most fickle palette.

Saxophonist John Butcher and percussionist Weasel Walter round out the trio. The first track 'An Illusionistic Panic Part 1' begins among a spate of percussive hits, saxophone smears, and bowed bass. The melange of ingredients exist both together and seeking their own space. Coming together with a cymbal crash, the tone is set for how these three musical provocateurs will proceed. 'A Blank Magic' follows, featuring skittering multi-phonics from Butcher, expressive and unexpected anti-patterns from Walter, and textural friction from Smith. The fevered pitch that Butcher brings the group to with a repetitive circular phrase and the subsequent percussive tangent that follows on 'Modern Technological Fetishes' is worth the price of the album alone.

Each track provides a different angle on the inner workings of this trio, each offering it's own complex arrangements of overtones, undertones, and meaty notes between. The titles, like the ones for Six Situations are inspired and borrowed from the mid-20th century artist Dan Flavin. ​

In 2009, David Peck's (PEK) Leap of Faith group reconvened after a lengthy hiatus to become a prolific producer of music that is always far outside the box. His Evil Clown label has flourished with a company of like-minded artists working in a collective environment. Leap of Faith has performed and recorded in formations ranging from trio through full orchestra, all challenging conventional beliefs and preconceived ideas about composing and performing. In their various manifestations, Leap of Faith have released more than seventy albums. With Domains the group continues to further the process of collective improvisation, or as PEK prefers to call it, "pure improvisation."

Performing as a quintet on this release, reed player and composer PEK is joined by regulars, cellist Glynis Lomon and drummer Yuri Zbitnov. A frequent contributor of late, bassist Silvain Castellano is on board as well as new addition—and a second bassist— Damon Smith. Smith, in addition to leading his own formations, has played with Vinny Golia, Joe Morris and Weasel Walter. He recorded an untitled free improvisation release with trumpeter Peter Evans in 2008 (ugEXPLODE).

While the gadgetry of past LOF releases are still close at hand (crank, sirens, rachet, etc.), Domains has a very different sound by comparison. The various contraptions that PEK favors are largely relegated to the background. Instead, the single, title track album is greatly impacted by Lomon, Castellano and Smith hovering in the lower ranges of their instruments. The net effect is that Domains has an ambient drone quality throughout much of its seventy-minute core. On either side there is an opposite high end, either from Lomon's cello or PEK's reeds, but the bottom dominates here.

As a guest performer, Smith adds a feature that LOF demonstrated on Solution Concepts (Evil Clown, 2015), where Thomas Heberer played cornet on two tracks. Guest musicians are used in a way that plays to their strengths, tweaking the process just a bit, but without compromising the unique vision of PEK. The music remains challenging and intelligent but perhaps more accessible, and it is the best Leap of Faith album to date. 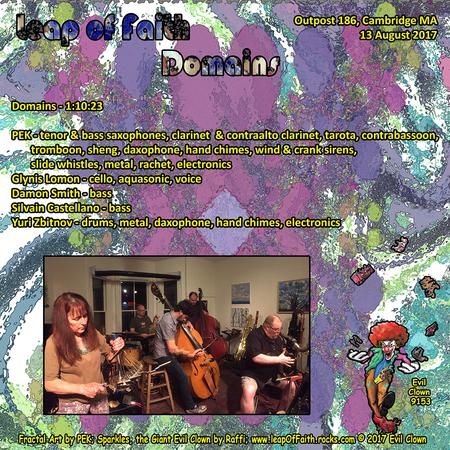 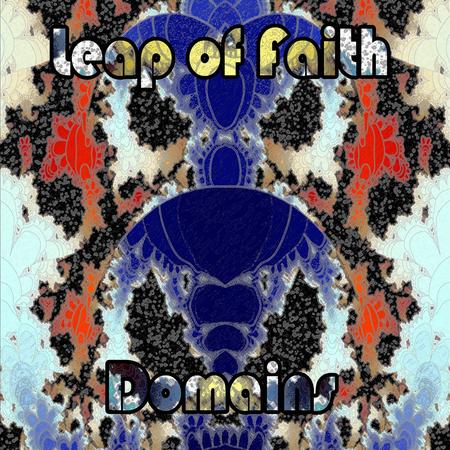 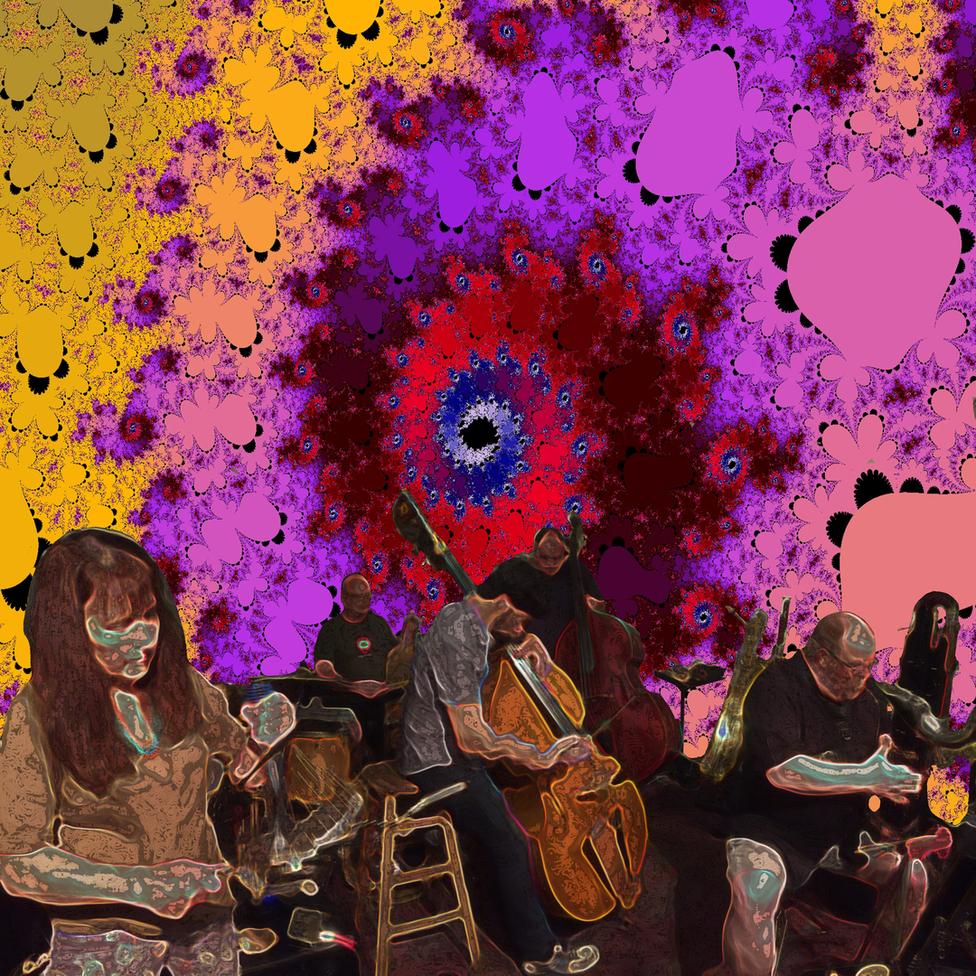 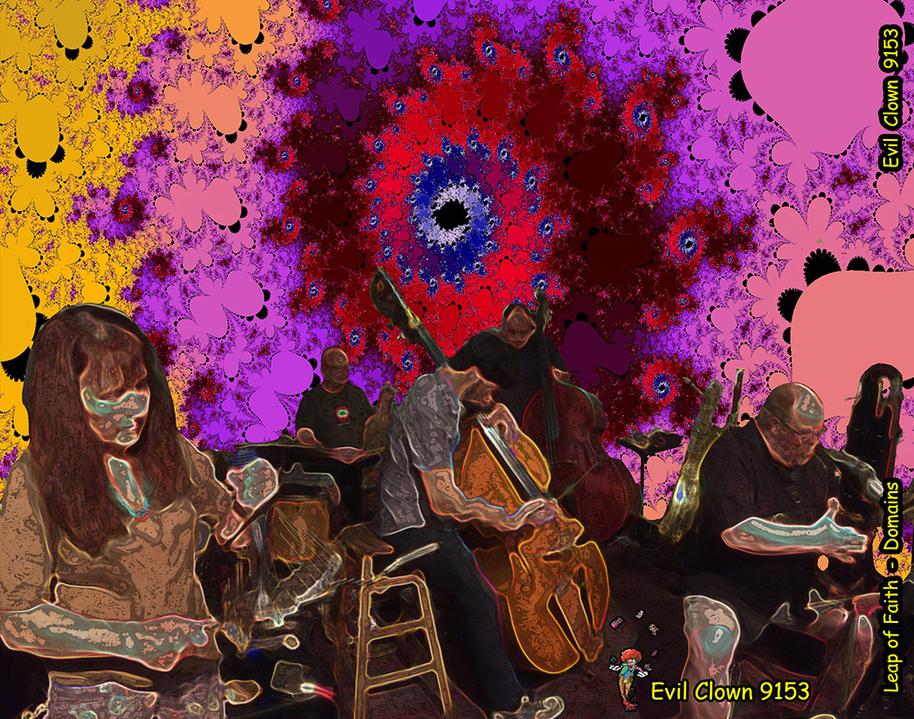 "The music remains challenging and intelligent but perhaps more accessible, and it is the best Leap of Faith album to date."
- Karl Ackermann, AllAboutJazz.com

One of the core ensembles in Boston's Evil Clown collective led by multi-reedist David Peck is Leap of Faith, a uniquely inspired collective free improv band with unusual instruments and percussive devices, here in a live concert at Outpost 186 as quintet with Glynis Lomon on cello, Damon Smith on bass, Silvain Castellano on bass, and Yuri ZBitnov on drums & percussion. 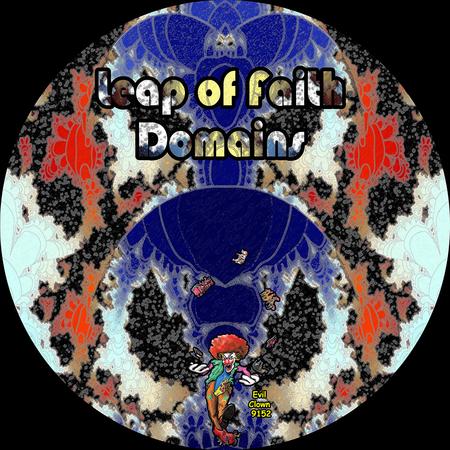 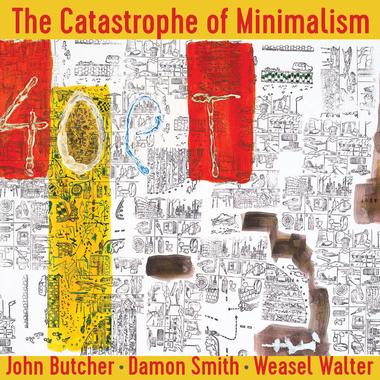 ​​Smith has relocated a few times over the years, from his website: "After many years in the San Francisco Bay Area, and six great years in Houston, Texas working regularly with Alvin Fielder, Sandy Ewen, David Dove & Chris Cogburn, Damon moved to the Boston area in the fall of 2016.” So, though he is a recent arrival in Boston, it obviously wouldn't be long before he was beckoned into the Leap of Faith multi-verse. Leap of Faith is the work of Boston based woodwind player David Peck (aka PEK), along with the core group of cellist Glynis Lomon and drummer Yuri Zbitnov. The trio is joined on Domains by bassists Silvain Castellano and Smith.

Those who have ventured into Leap of Faith's musical world know of the rich rewards and decadent dangers contained within. Domains starts quietly, a bed of sound is made through various percussion instruments and what sounds like a subconscious accordion. There is a rumble from down in the bass register, and as tempo and temper pick up, the bowed sounds of the low strings swirl about, while the contra-alto clarinet spins a rich suspended gossamer web around the skittering percussion. It would be quite hard to pick out which is Castellano and which is Smith, however a Leap of Faith recording isn’t so much about the individual voices, but rather, the totality of the improvisation. Veering from bowed to bouncing to bitonal, the basses dominate, and the group weaves their dark magic around them (check out the music around the 55 minute mark - its intense!).

Recorded live at Outpost 186 in Cambridge, MA in August 2017, Domains is a unique album. With the tilt towards the strings, the set is dominated by the low frequency instruments and features a different level of gravity. Absolutely captivating.