Drawing of the Show by Glynis' friend Mick...  Thanks Mick! 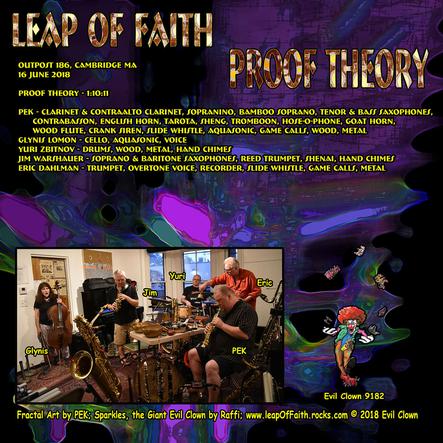 LEAP OF FAITH with PEK / GLYNIS LOMON / YURI ZBITNOV / JIM WARSHAUER / ERIC DAHLMAN - Proof Theory (Evil Clown 9182; USA) Featuring Dave PEK on sopranino, alto, tenor & bass saxes, clarinets, double reeds, tarogato, flute, harmonium, etc., Glynis Lomon on cello, aquasonics & voice, Jim Warshauer on soprano & bari saxes & shenai, Eric Dahlman on trumpet, recorder, game calls & voice and Yuri Zbitnov on drums, percussion & metal. This disc is yet another smaller, quintet version of Leap of Faith, with two guest horn players. The only name I vaguely recognized is Jim Warshauer, who is also a recent disc with Rakalam Bob Moses, another Boston-based musician and professor. The set here was recorded at Outpost 186 in June of 2018. Unlike other Leap of faith discs, this one erupts intensely right from the beginning with a dense layer of percussion (gongs, bells & cymbals) plus waterphone(s) and whistles. The first solo sounds like PEK on some double reed but soon morphs into a slow moving layer of brass, bass sax and percussion. Since the three core members, Mr. Peck, Ms. Lomon and Mr. Zbitnov, are longtime veterans of dozens of Leap of Faith sets, they know when to lay back, interact and erupt in equal amounts. There are moments of frenzied activity and moments of calm contemplation and lots of time in between. Each member of this quintet take their time and get a chance to stretch out, solo and interact. Several highlights are captured throughout: when Mr. Lomon solos on frenetic plucked cello midway, there is layer of percussion for her to interact with. Midway through this, Leap of Faith evolve into their ritualistic haunting vocals section which doesn’t last very long but does a good job of taking us on our humanistic journey… Another winner..! - Bruce Lee Gallanter, DMG 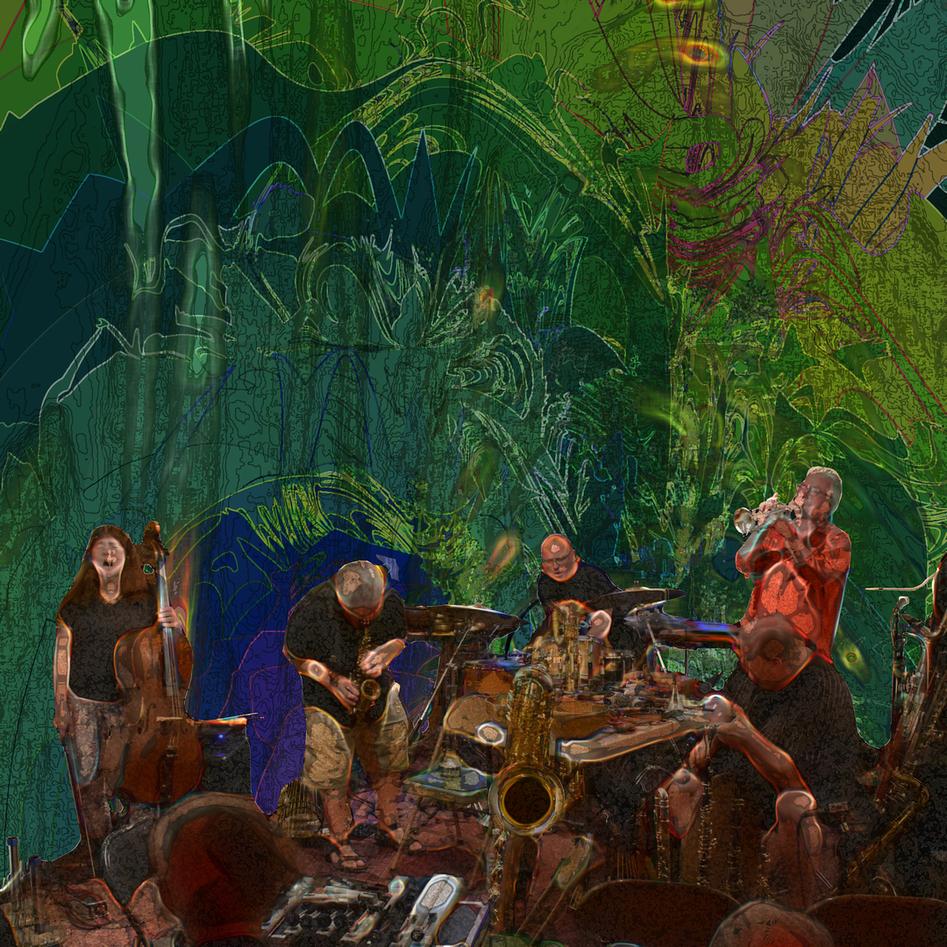 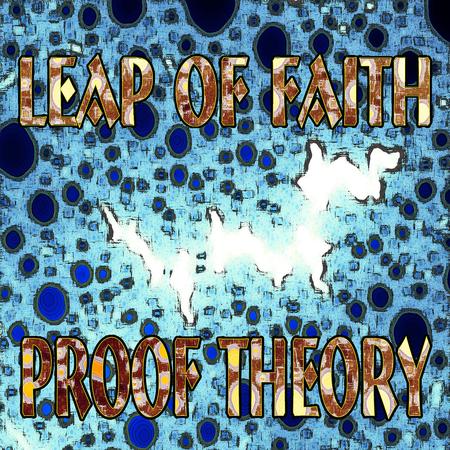 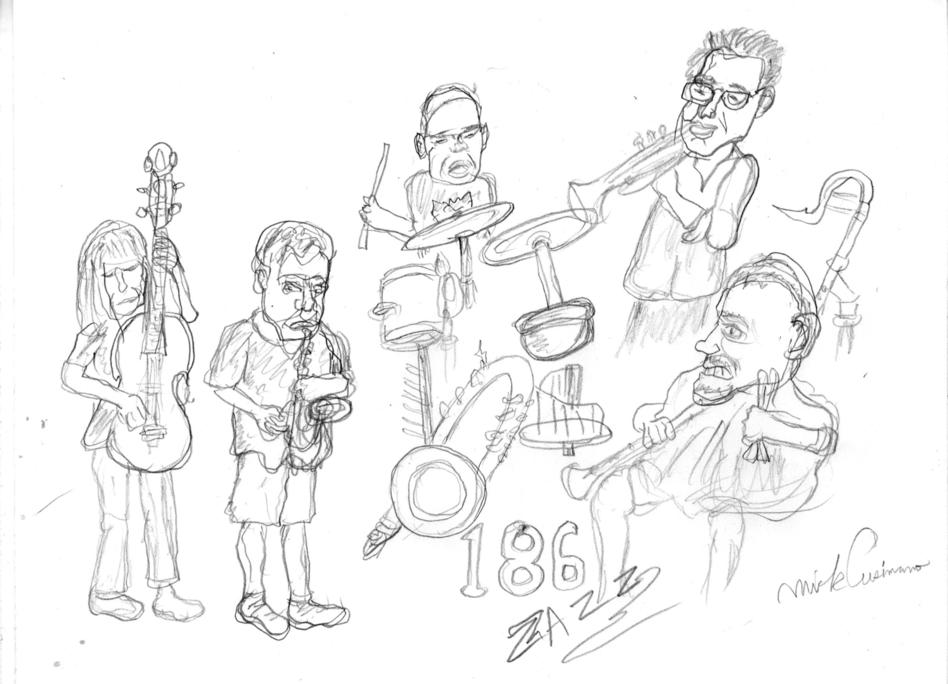 A killer quintet Leap of Faith tears it up LIVE at Outpost 186 with special guests Eric Dahlman and Jim Warshauer... Get it while its HOT!

"Unlike other Leap of faith discs, this one erupts intensely right from the beginning with a dense layer of percussion (gongs, bells & cymbals) plus waterphone(s) and whistles…  There are moments of frenzied activity and moments of calm contemplation and lots of time in between…  Another winner..!"

Leap of Faith is the core trio of the Leap of Faith Orchestra (LOFO) comprised of PEK on clarinets, saxophones, double reeds & flutes, Glynis Lomon on cello, aquasonic & voice, and Yuri Zbitnov on drums & percussion. The ensemble is based in Boston and dates back to the early 90s. We utilize a huge arsenal of additional Evil Clown instruments to improvise long works featuring transformations across highly varied sonorities. The ensemble has always been highly modular and our many recordings feature the core trio in dozens of configurations with a huge list of guests.

I recently ran across trumpeter and overtone vocalizer Eric Dahlman who played with early period Leap of Faith bassist Craig Schildhauer in the 90s when Leap of Faith was first active. He came down for the last Leap of Faith Orchestra performance at Third Life Studios a few months ago. He plays with a bunch of different improvisers in the Boston area. I always love recruiting players with prior associations with other musicians, since when several people with long relationships join the project together, the ensembles benefit from their history.

Eric has a band and a long association with reedman Jim Warshauer. For the Evil Clown Headquarters recording session, Turbulence - Vorticity, I invited Eric and Jim to join myself and Yuri Zbitnov, the primary drummer/percussionists for the many Evil Clown ensembles. This was a great set, which leverages the skills two deeply connected duets.

That set was so successful, I set up the next open date of the Outpost 186 residency for Leap of Faith with Eric and Jim as the guests. I knew that adding Glynis to the quartet Turbulence ensemble would be terrific and it certainly was! Jim brought a nice set of horns to complement mine. I am reminded in two ways of the Great Steve Norton, who played with LOF for about a year and a half following the 2015 reboot. The first is his occasionally lyrical side, and the second is the number of possible unusual instrument combinations. I was again impressed by Eric’s overtone voice skills. Yuri and Glynis tore it up like usual.

After only a few sessions, Eric and Jim have already made great contributions to the Evil Clown catalog!! Looking forward to playing more with these guys in the future… Look for more by this same quintet at some point in the future.