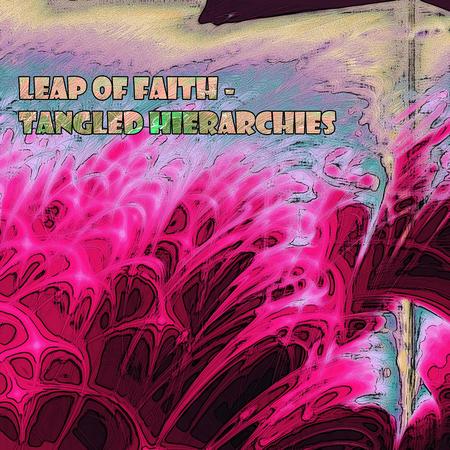 Leap of Faith is the core trio of the Leap of Faith Orchestra (LOFO) comprised of PEK on clarinets, saxophones, double reeds & flutes, Glynis Lomon on cello, aquasonic & voice, and Yuri Zbitnov on drums & percussion. The ensemble is based in Boston and dates back to the early 90s. We utilize a huge arsenal of additional Evil Clown instruments to improvise long works featuring transformations across highly varied sonorities. The ensemble has always been highly modular and our many recordings feature the core trio in dozens of configurations with a huge list of guests.

This particular performance has guests Eric Zinman on piano and Syd Smart on electronic percussion. Syd and Eric are the other 2 players in Glynis Lomon’s other trio, New Language Collaborative (NLC). NLC was active for the 10 years or so in the 00s and 10s while Leap of Faith was inactive due to my scheduling conflict with my day gig. Syd and Eric where also around in the 90s and all of us played together with Raqib Hassan and various other ensembles. Glynis, Syd and Eric go even back to the 80s, before I showed up in Boston in 1989. Both Syd & Eric have also been active in the Evil Clown scene with the Leap of Faith Orchestra, small format Leap of Faith ensembles, Metal Chaos Ensemble and String Theory. So, this mashup of two of Glynis’ bands has collective roots going back more than 30 years!

Despite these deep connections, this exact quintet has not previously performed, although we did an excellent sextet set (Leap of Faith – Irreducibility) with these 5 players plus relatively new arrival Albey onBass last September. Glynis and I decided we wanted to do this quintet set and I put it in the book for the January 2019 Outpost 186 show in the residency. For a week before the show, the talking heads on the TV kept warning of the giant storm coming across the country due to hammer us on the day of the gig… I generally schedule fewer shows during January and February, since New England always has bad weather days, and even when the weather is OK, it’s a pain in the ass to mobilize equipment with snow all around. My residency with Rob at Outpost 186 is a one-per-month arrangement, so I do schedule winter shows there which are occasionally cancelled for big storms. I hate to cancel anything, so I watched the weather news carefully, and it turned out that there was going to be snow, but not much accumulation until after the show was going to be over… So I got on the phone and persuaded all the players to participate despite the storm.

I’m really glad that we kept the show. We even had one audience member who braved the elements and made the performance in person! The collective experience of these 5 players really shows in the deep connections shown by tight transformations… I anticipated a stellar improvisation and was not disappointed. Look for more sets from this quintet Leap of Faith in the future!

LEAP OF FAITH With PEK / GLYNIS LOMON / ERIC ZINMAN / SYD SMART / YURI ZBITNOV - Tangled Hierarchies (Evil Clown 9206; USA) Personnel: PEK on alto, tenor & bass saxes, bamboo soprano, clarinets, taragato, sheng & metal, Glynis Lomon on cello & aquasonics, Eric Zinman on piano, Syd Smart on electronic percussion and Yuri Zbitnov on drums, gong, wood & metals. Our New Year, February actually, begins with six discs from the ever-prolific Leap of Faith folks. The core members remain these three: PEK, Glynis Lomon & Yuri Zbitnov. The guests this time are two older fellows, Eric Zinman (last seen with Linda Sharrock at Victo) and Syd Smart, who has worked with Sam Rivers and Rabiq Hassan. This disc begins with a siren, minimal piano, suspense-filled cymbals & gong(s) and the eerie voice of Ms. Lomon. The set captured here was recorded at Outpost 186 in January of 2019, just a month ago. This quintet version of Leap of Faith is stripped down so that everyone gets a chance to solo and we can hear them all. Mr. PEK works with one reed or wind instrument at a time, taking a number of spirited solos. What stands out is the cello playing of Ms. Lomon, spiritual piano undertow by Mr. Zinman and percussion/dialogue from Yuri Zbitnov and Syd Smart. More cosmic music from mere mortals?!? - Bruce Lee Gallanter, DMG 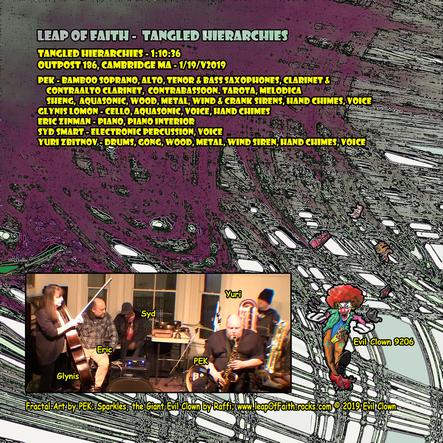 PEK tweak of a PEK Photo 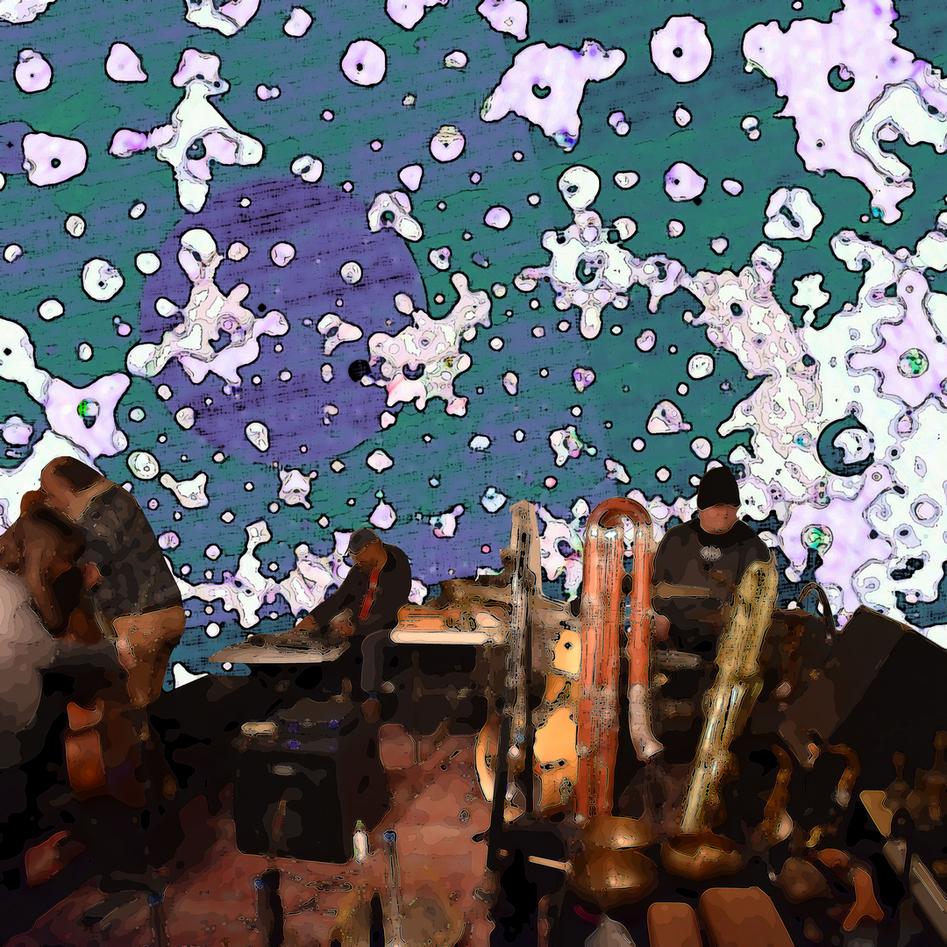 "...  This quintet version of Leap of Faith is stripped down so that everyone gets a chance to solo and we can hear them all.  Mr. PEK works with one reed or wind instrument at a time, taking a number of spirited solos. What stands out is the cello playing of Ms. Lomon, spiritual piano undertow by Mr. Zinman and percussion/dialogue from Yuri Zbitnov and Syd Smart. More cosmic music from mere mortals?!?"    - Bruce Lee Gallanter (Full Review Below)