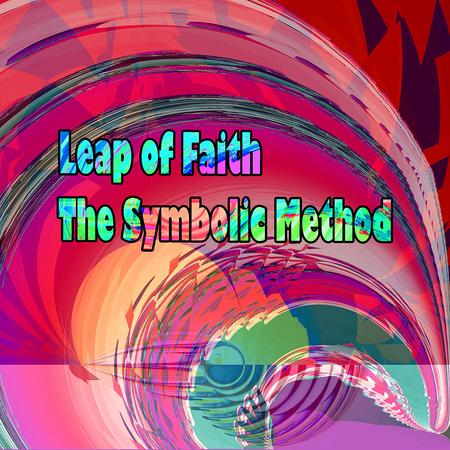 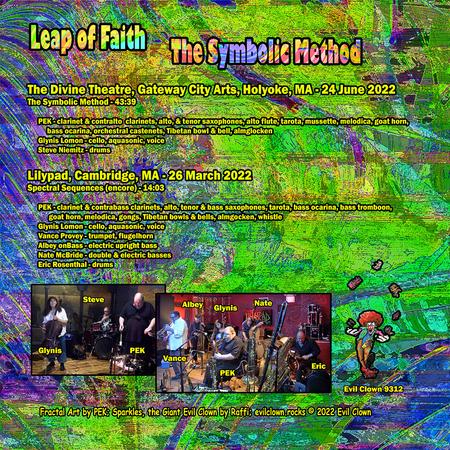 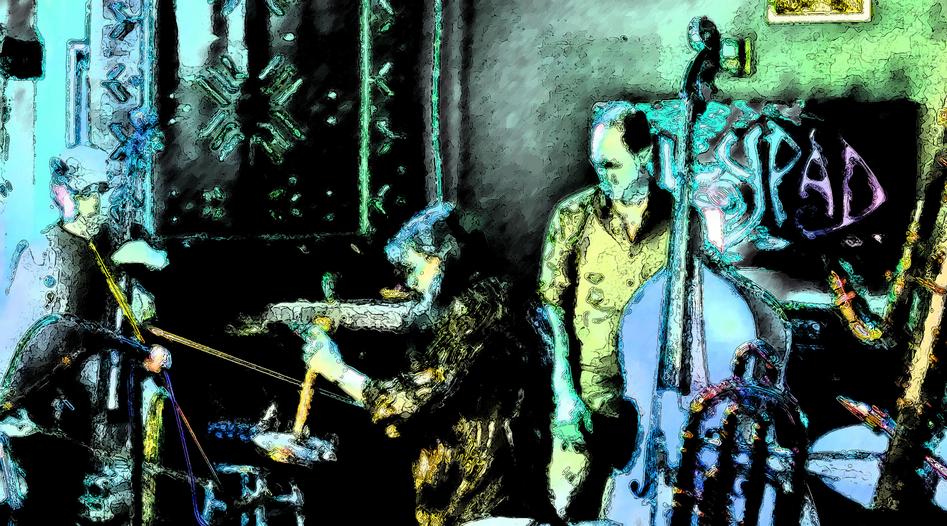 Leap of Faith - The Symbolic Method

“…I like the return of Leap of Faith to Live Performance.  These two shows really display what happens when eager musicians are able to perform for enthusiastic observers.  Check it out!”

Leap of Faith is the core duet of the Leap of Faith Orchestra (LOFO) comprised of PEK on clarinets, saxophones, double reeds & flutes, and Glynis Lomon on cello, aquasonic & voice.  The ensemble is based in Boston and dates back to the early 90s.  We utilize a huge arsenal of additional Evil Clown instruments to improvise long works featuring transformations across highly varied sonorities.   At times, the core unit has been a trio or even a quartet.  The longest running core unit was comprised of PEK, Glynis and drummer Yuri Zbitnov, who played for the last couple of years of the archival period and the first 5 years of the reboot starting in 2015.  The ensemble has always been highly modular, and our many recordings (well over 100) feature the core unit in dozens of configurations with a huge list of guests and occasionally as only the core unit with no guests.  Currently, the core unit is the duet of PEK and Lomon and we are regularly presenting LIVESTREAMs to YouTube from Evil Clown Headquarters with other guest performers.

When the pandemic hit, I focused on solo projects until the vaccines arrived.  Then I opened Evil Clown Headquarters for Livestreaming shows and we have been cranking out great performances with many of the Evil Clown ensembles.  Live Performances, however, have been very infrequent – Only two Leap of Faith shows:  Spectral Sequences from March 2022 and The Symbolic Method from June 2022.  I am of two minds on this 1) I miss live audiences and I have really enjoyed performing in front of people again.  2)  Evil Clown Headquarters Livestreaming shows have many advantages including ease of scheduling, the quality of the recording and video presentation, and not having to move all the stuff required to present the Evil Clown broad palette aesthetic (ow, by back!).  As things open up more over time, we will return to more frequent live performances, although I think it is likely that we won’t do as many as we did pre-pandemic and instead keep producing frequent livestream shows.

So, this newest release, The Symbolic Method, contains the entire second live performance of a trio edition Leap of Faith with guest Steve Niemitz at the drum kit, and the encore set (which would not fit on the CD with the lengthy first set) from a Sextet edition from the first live performance with guests Vance Provey (tp), Albey onBass (b), Nate McBride (b), Eric Rosenthal (d).

Bonnie Kane, an Evil Clown regular, hosts a series in Holyoke MA called the Friday Experiment.  It’s a great monthly series with each night featuring tight sets by several bands and a group jam at the end.  Holyoke is about 90 minutes west of the Boston Area, so Bonnie travels a ways to get here for Evil Clown sessions.  Steve Niemitz, an Evil Clown regular at the drums, also lives in that area, so when Bonnie asked if we would do this date, I immediately knew that we would present a trio with Steve as the guest.  The one previous occasion when we did this series (the Observed Present – 2/15/2020), right before the pandemic, was the same trio for the same reason.  We had a small, but enthusiastic audience who really spurred us into a dramatic 45 minute improvisation!!

Alex Lemski hosts a series called the Creative Music Series which holds roughly monthly improvisation shows mostly at the Lilypad in Cambridge or at one of several outdoor venues.  Alex is a great supporter of the music who has done an excellent job of understanding how to raise an audience for live performance for improvisation, so I welcomed the opportunity to produce the Spectral Sequences show with him.  We had the largest crowd in the LilyPad that we have ever had, and the enthusiastic audience spurred us into a rousing 90 minutes of improvised madness.

This configuration of Leap of Faith with 3 strings (vc, b, b), reeds, trumpet and drums, is one that I like.  Many Leap of Faith ensembles are comprised of reeds, strings, and percussion.  As stated above, the core unit with Yuri, contained one from each of these instrument categories.   A trio with this instrumentation can be expanded to a lager group by adding one or more horn players, string players, or percussionists.  This 3,2,1 solution, with the amazing string section of Glynis (vc), Albey (b) and Nate, the horns of PEK and Vance, and the master drums of Eric, really shows how an ensemble with these elements can shred when every player steps up!

I like the return of Leap of Faith to Live Performance.  These two shows really display what happens when eager musicians are able to perform for enthusiastic observers.  Check it out!

Leap of Faith - The Symbolic Method