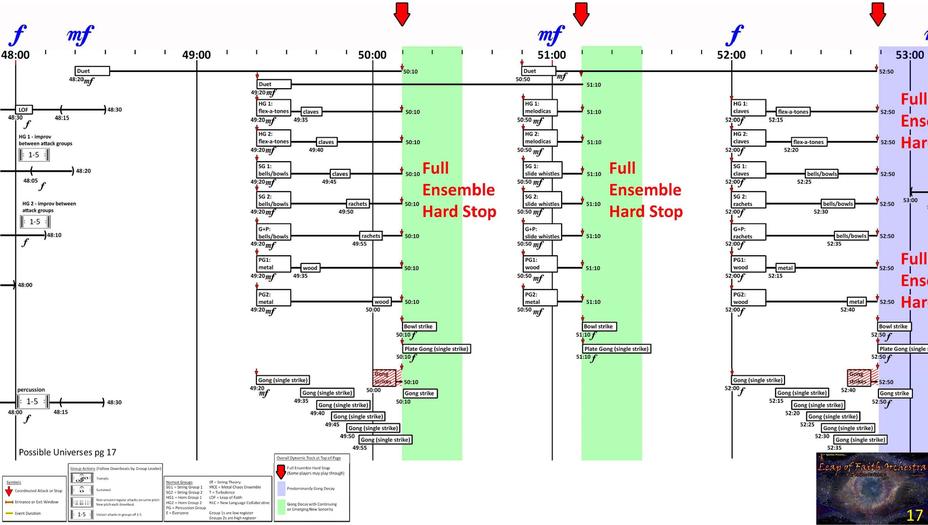 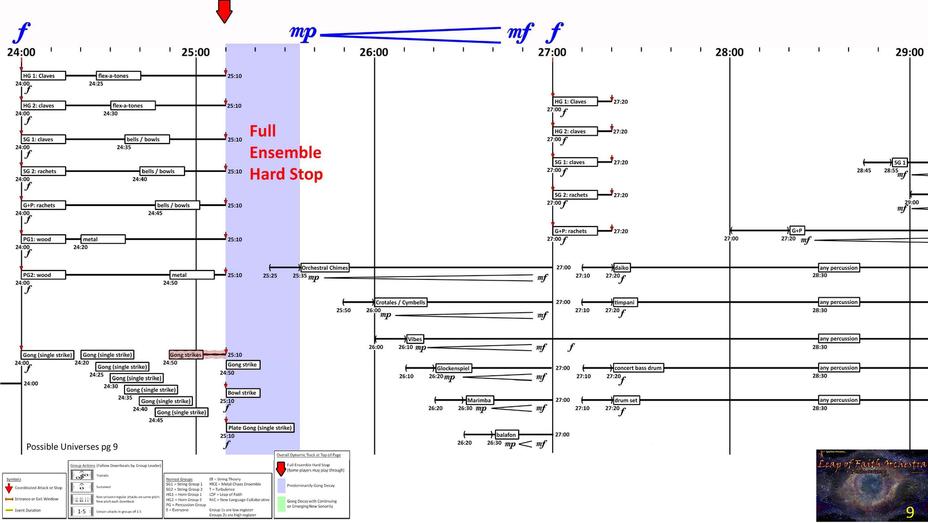 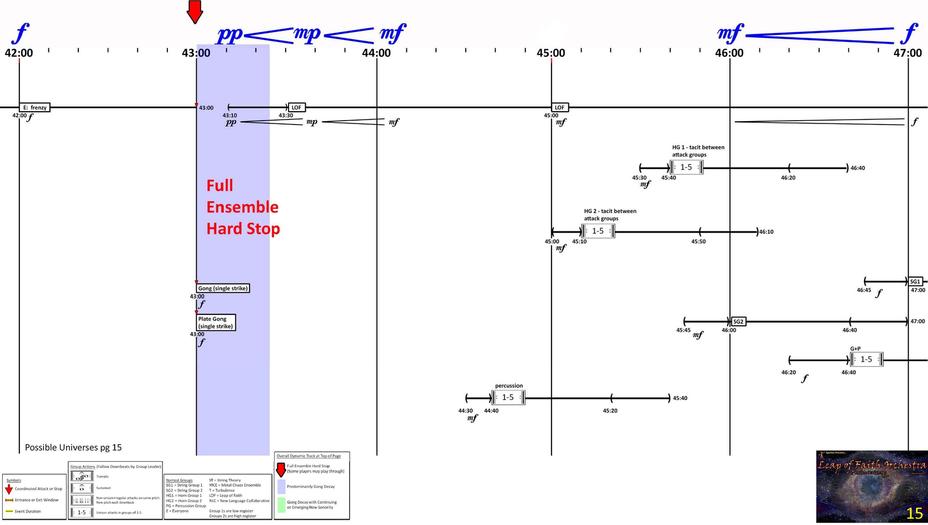 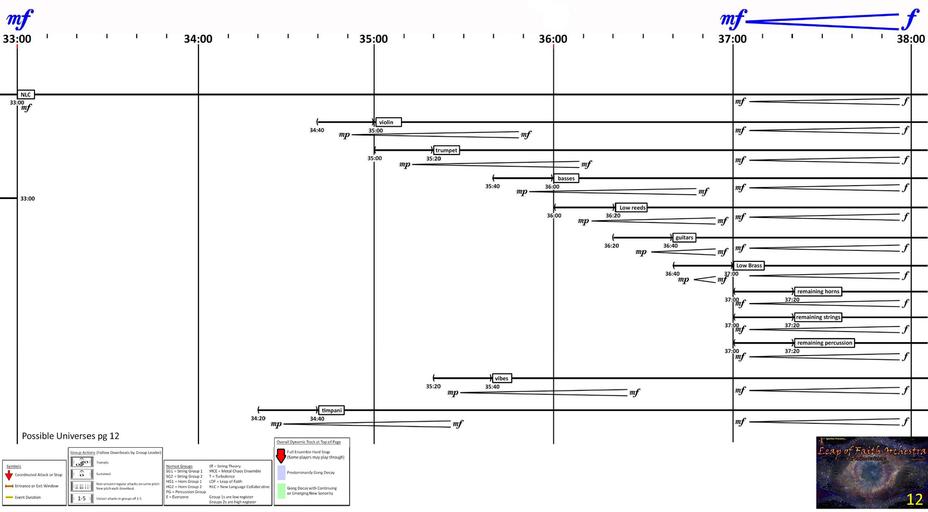 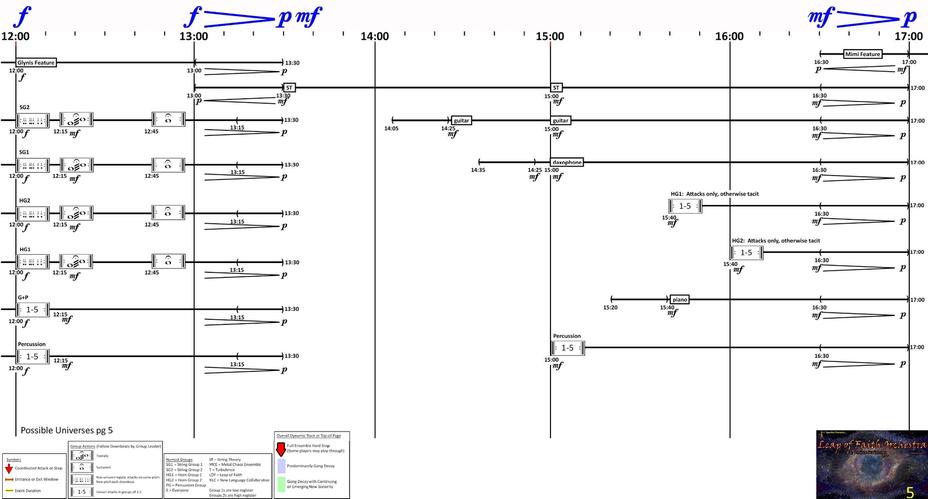 Like all my scores for the full Leap of Faith Orchestra, Possible Universes uses a device called Frame Notation where written English descriptions of the overall sonority desired and simple graphic symbols are given durations for each player on their part along with direction on when to play and when not to play. The directions are put in little boxes called frames which are arranged on a timeline and are simple enough to be immediately understood by the performers.  Horizontal lines, called Duration Bars, extend across the page indicating when each Event (the Frame + the Duration Bar) begins and ends.  An Event can be intended for a defined group within the ensemble (for example, Metal Chaos Ensemble or MCE), a custom group (for example, Tubas), or an individual (for example, Andria Feature).

The players track the elapsed time on a very large sports clock. There is no melodic, harmonic or rhythmic information specified.  This system allows me to compose detailed Ensemble Events without having to notate pitches or rhythms which would require significant rehearsal to accurately achieve.   I did, however prepare a memo - a guide to reading the score - which I distributed a couple of weeks in advance of the performance. Reading the Notes and following the score together clearly explains the meaning of all of the symbols.

Possible Universes expands on the compositional language I developed in The Expanding Universe and Supernovae.  Events are further condensed and the rate of transformation is generally increased with event durations as short as 10 seconds.  The number of different large scale dense homogeneous textures  has increased and those textures undergo transformations.  Those evens occupy a similar percent of the total duration to Supernovae, but are much more varied in textural make-up.  There is even more textural contrast between the movements in the work.

The score below is probably a 95% draft as of this writing in Early February 2017.  The performance is on May 28, 2017.  Before then I still have to make updates to the score reflecting the final confirmed instrumentation/players and create the parts.  The parts are just color-coded versions of the full score.  A players individual frames and duration bars are Hilighted so the player can immediately understand both their directions and the overall form of the work. 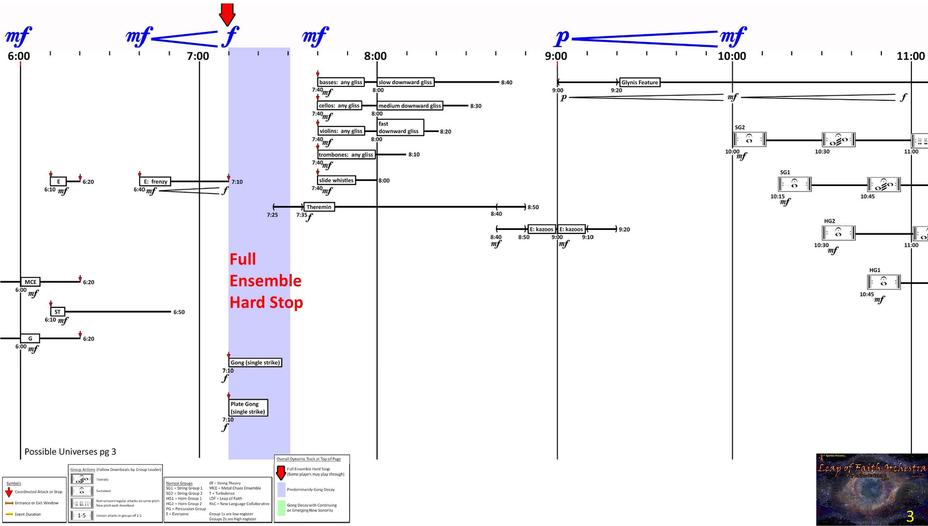 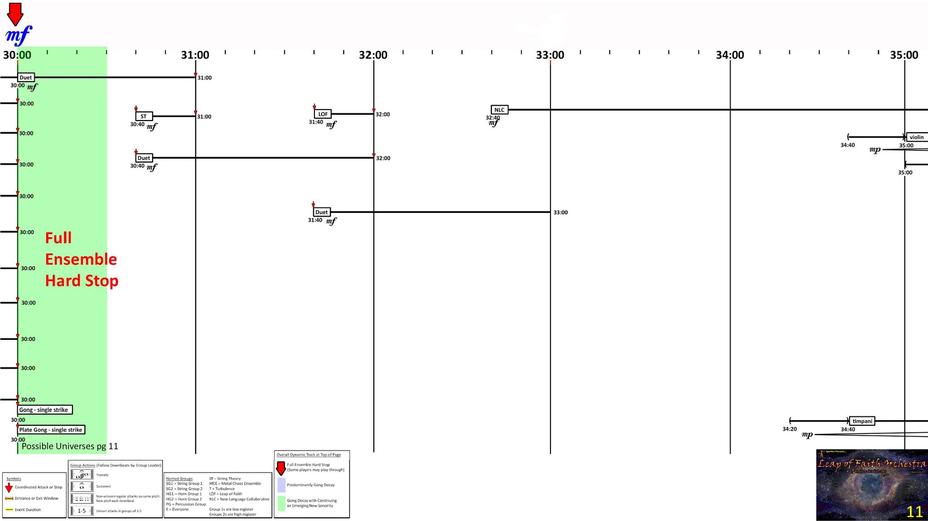 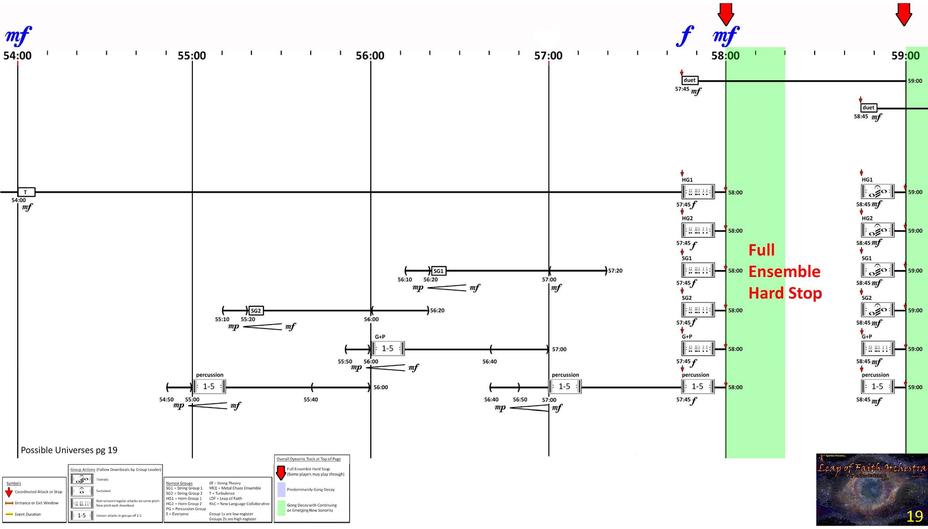 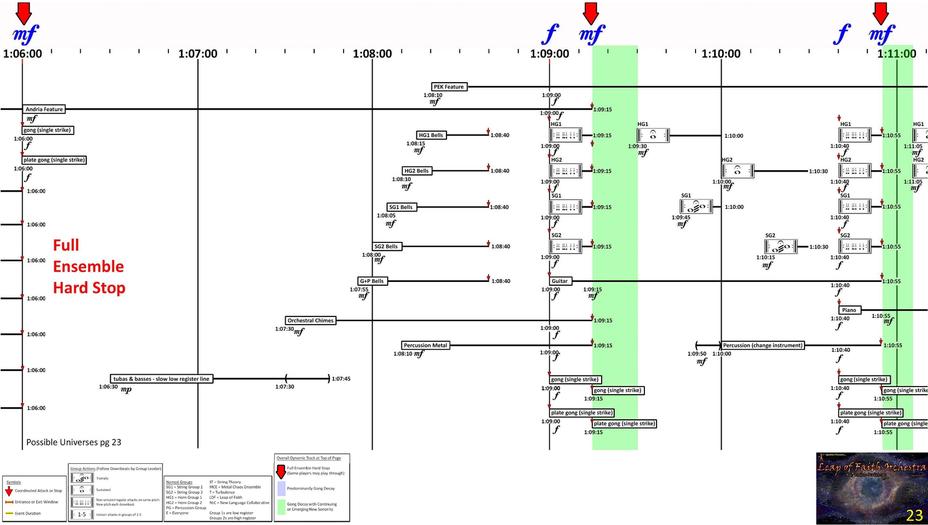 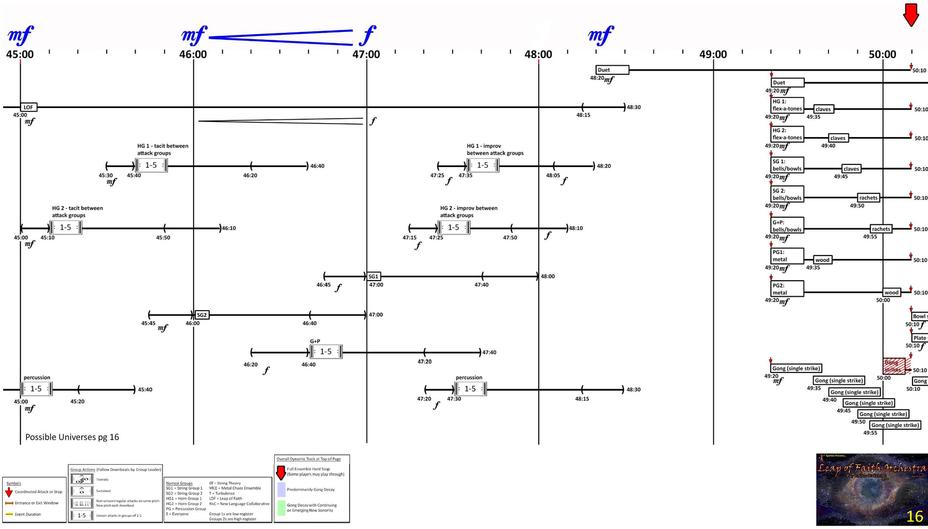 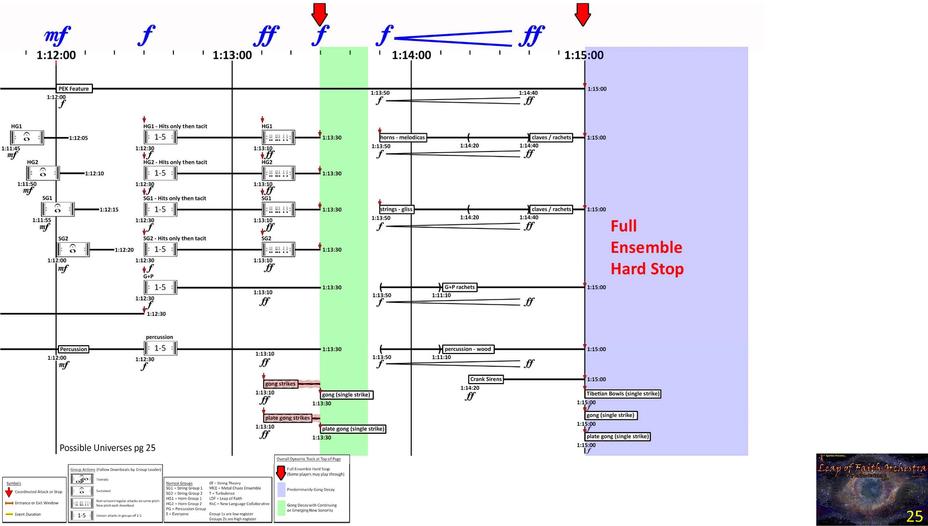 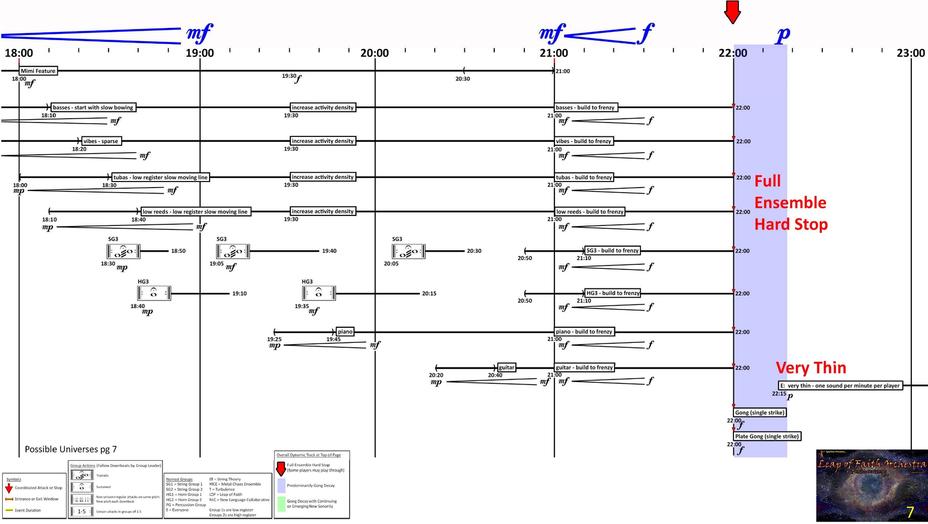 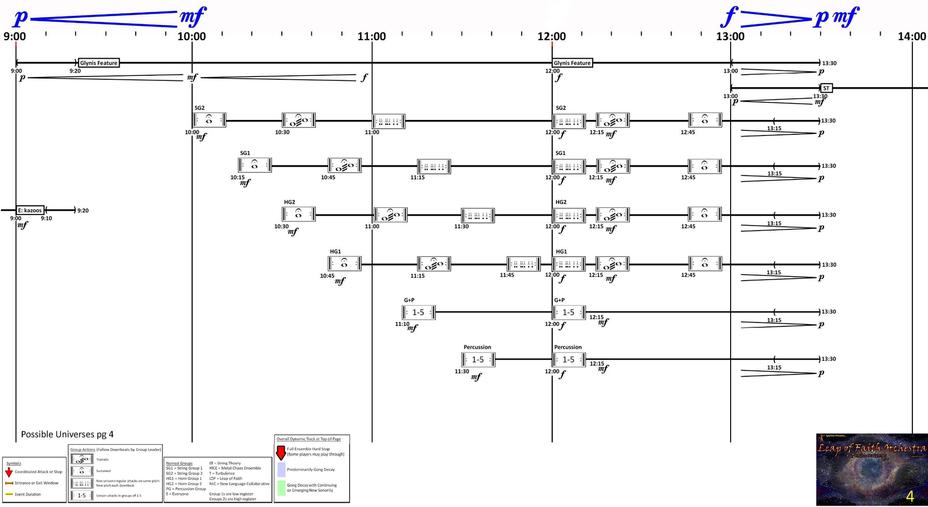 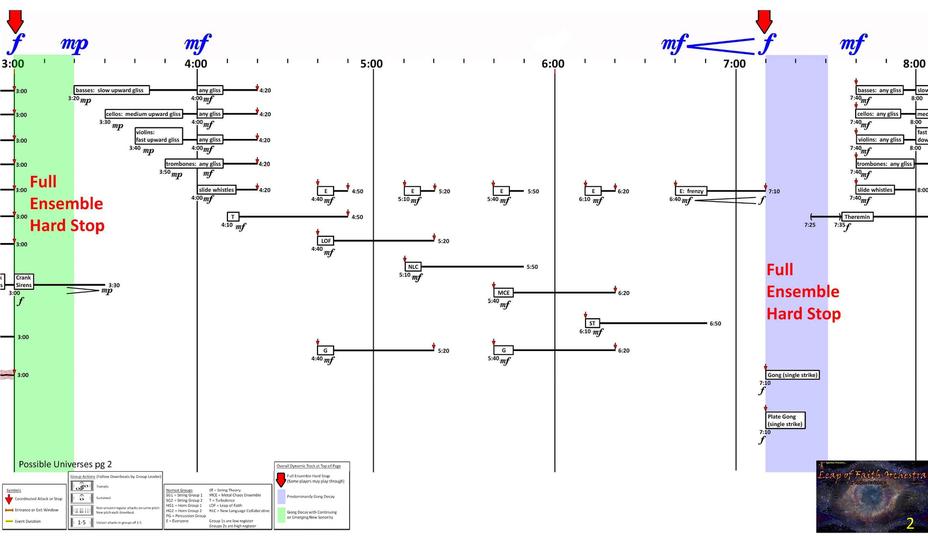 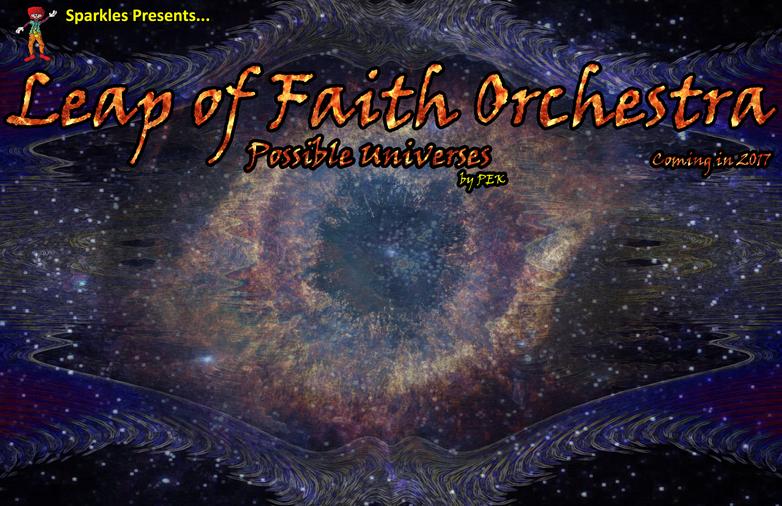 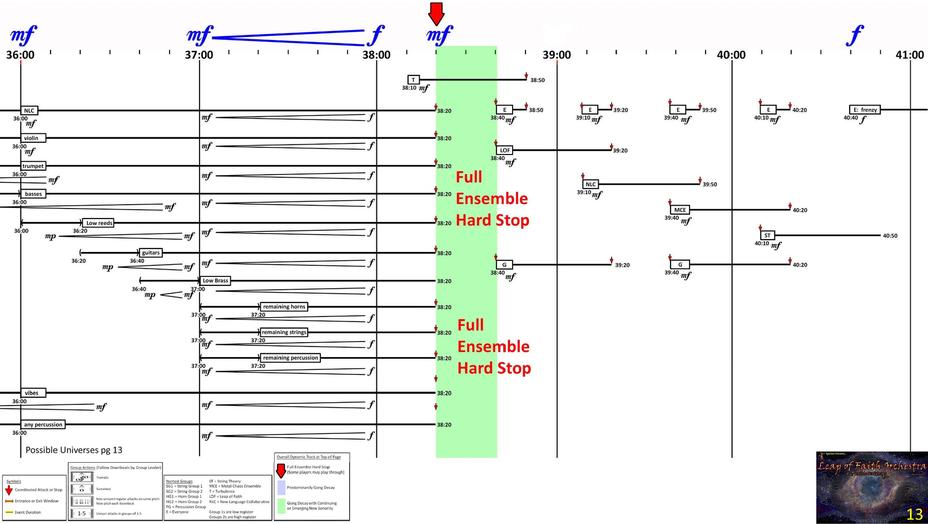 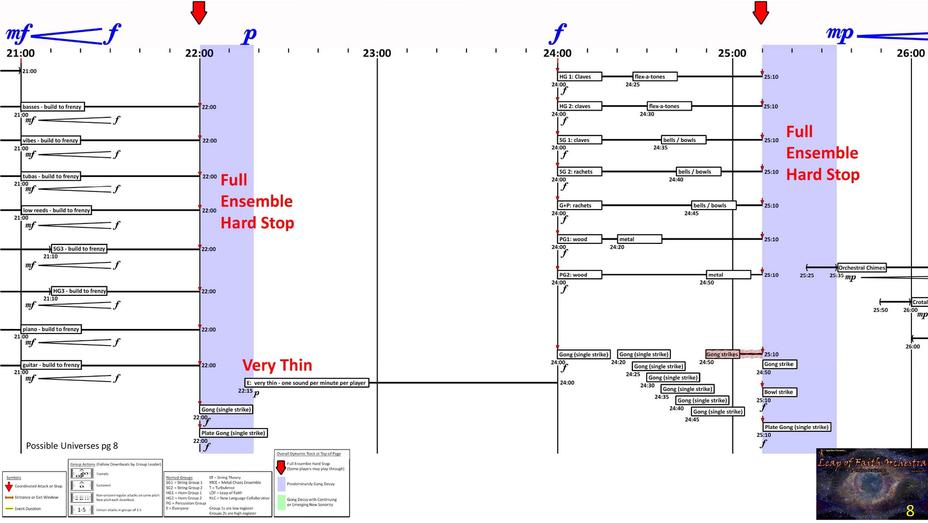 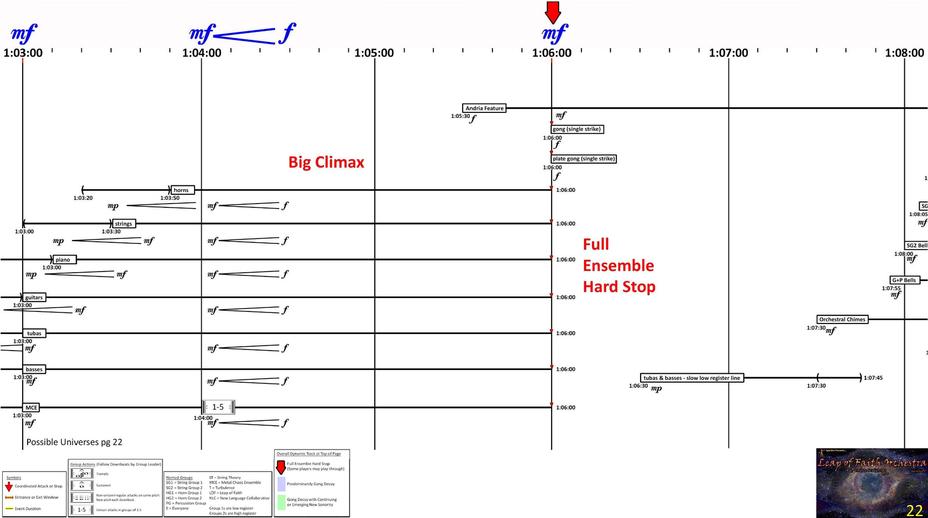 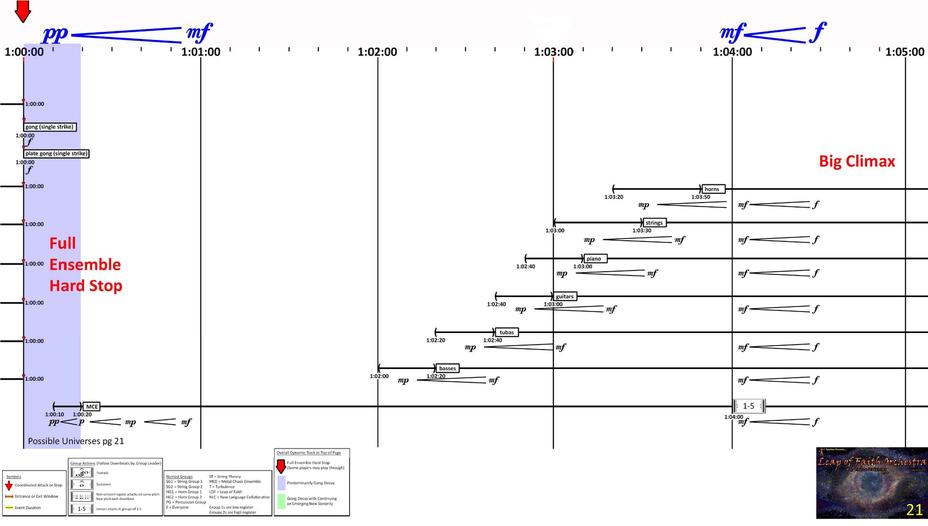 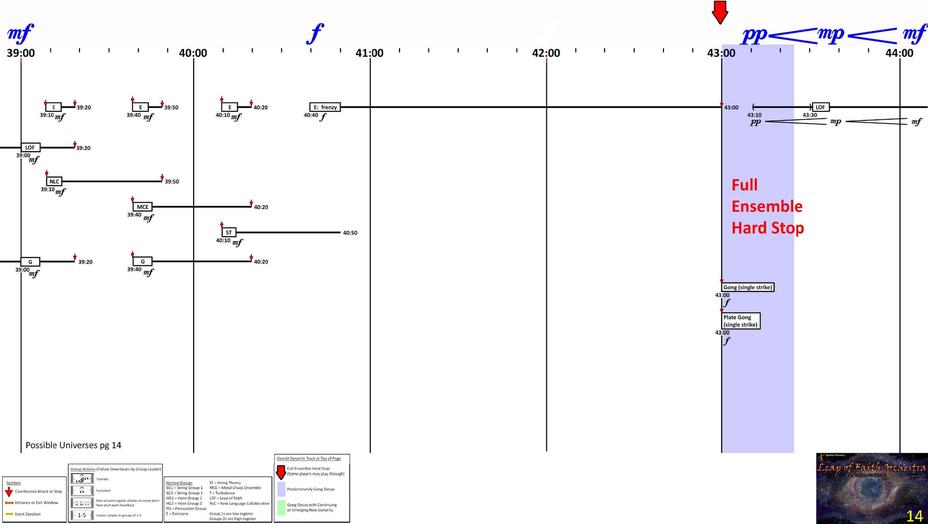 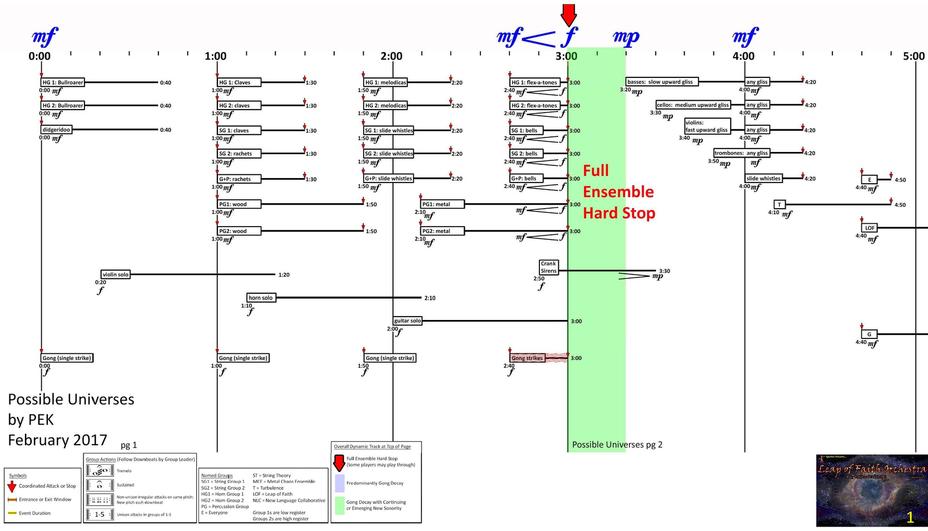 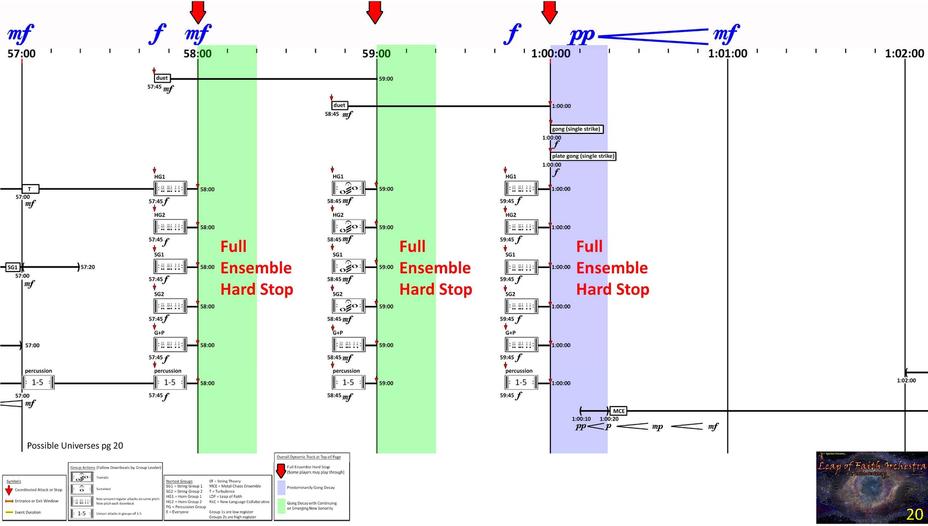 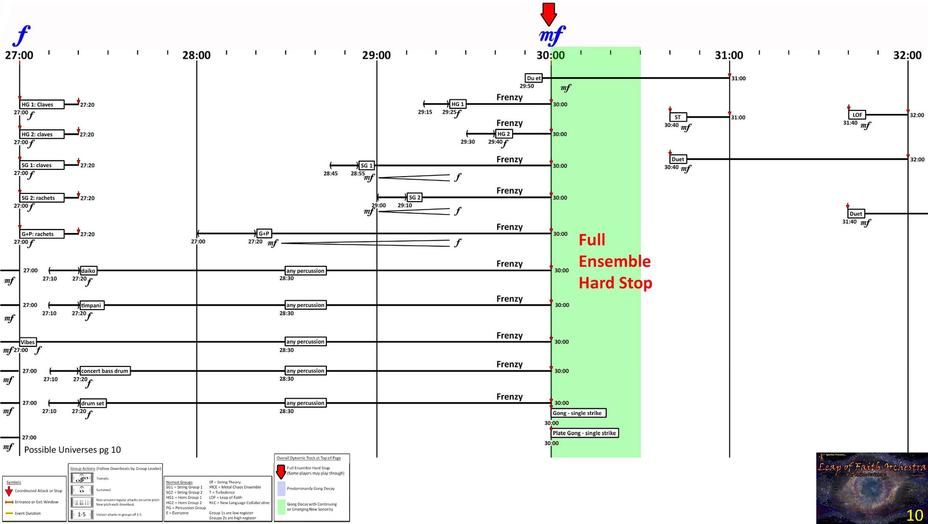 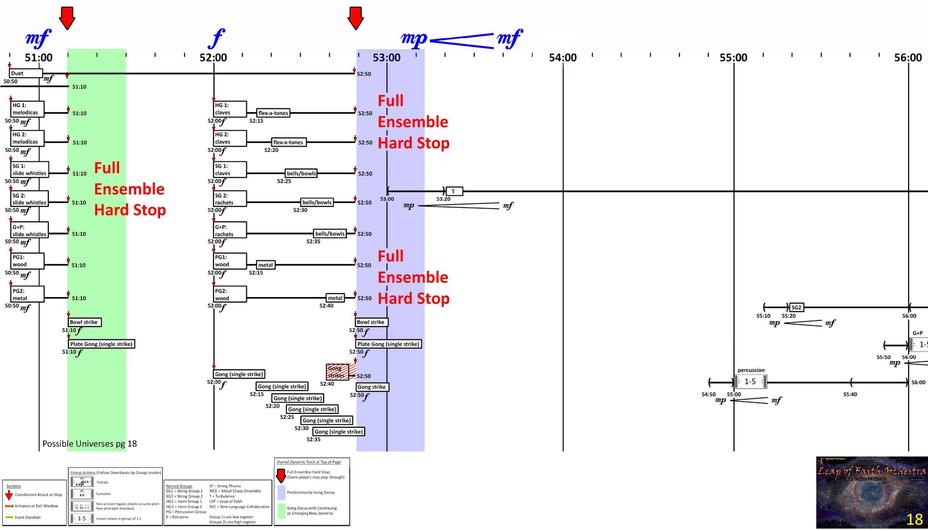 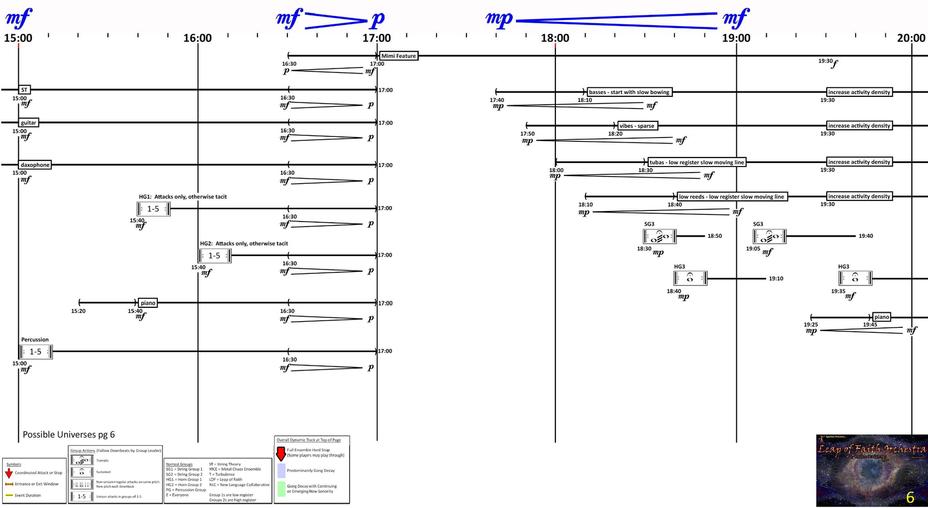 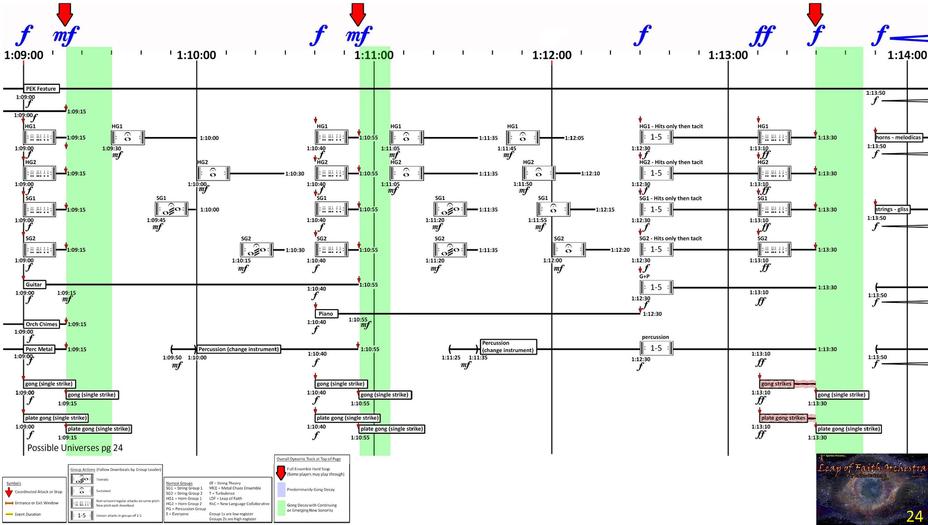