Rob Miller Photo of PEK at the Helix Performance

As of this writing, I have more or less the entire ensemble fixed.  The school is going to let us use some of their heavy percussion and I went there yesterday to scope it out.  Now that I know ensemble and instrumentation, I need to pass through the score again to assign specific names to events and to focus the percussion scoring.  After that I will produce the parts.  Each player gets a copy of the score with their instructions clearly marked with high liters.

​Excerpt From Karl Ackermann's Review in AllAboutJazz on

"...The highly capable improvisers engaged by PEK are participating in the composer's unique method of Frame Notation…  Along with strings and three basses, a large assortment of percussion instruments, and two tubas, the orchestra utilizes an assortment of non-conventional devices such as bullroarers, claves, flex-a-tones, slide whistles, wind sirens, crank sirens, bells, Tibetan bowls, ratchets and a tube-o-phone…  Possible Universes works in a surprisingly paradoxical way, allowing structure and freedom to coexist, while constantly challenging the ear. It's not quite like anything else..."

"Alien yet familiar, bizarre yet completely fascinating. Expanding, contracting, erupting, settling down, always as one force..." 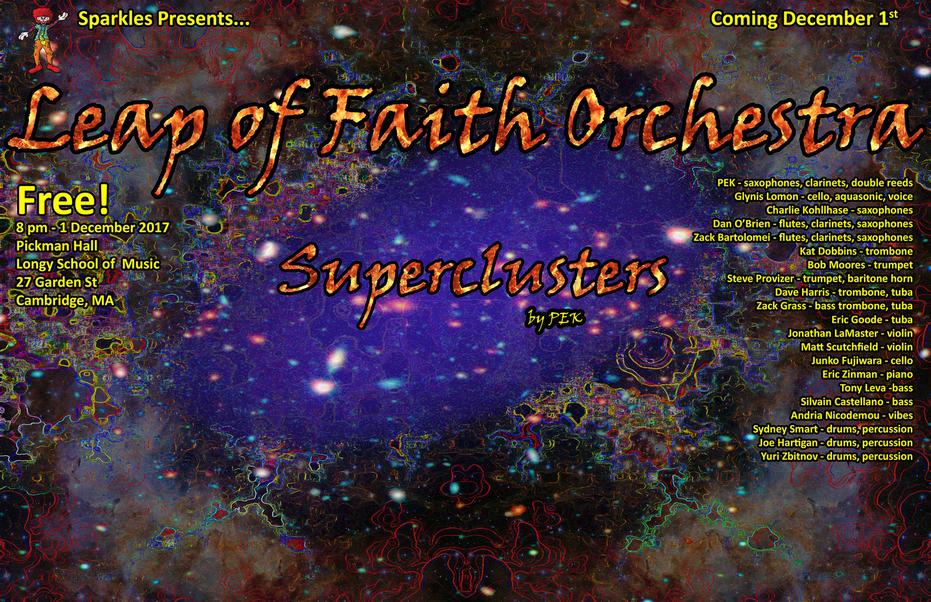 Photos of Possible Universes by Raffi

The accelerando idea is used again later in the score in the percussion section.  This excerpt from 31:00 show the frames used to direct the percussion section in two groups through an acceleration event while the strings glissando and I play the Sheng...  This device is used several more times in the score and then the work concludes with a deacceleration event which is structurally retrograde from the opening. 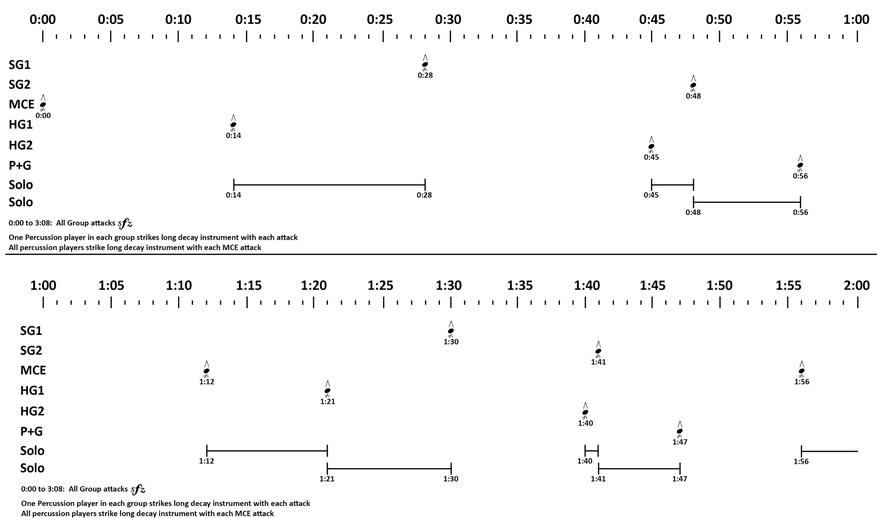 The Leap of Faith Orchestra is a large improvisation ensemble comprised of 5 Sub-Units that can play independently or in combination.

When deciding that I wanted to create a large improvisation ensemble version of Leap of Faith, I reflected on my prior experience with large groups where we tried to gather the entire group and rehearse. I decided to take a different approach and to develop the orchestra slowly over time by working with many smaller sections and combinations ultimately leading to the full unit.  By now, all the orchestra members have experience performing with each other in various combinations, and we have created a lot of great work in the process.  The debut performance of the full LOFO, The Expanding Universe, occurred in June 2016; the follow-up, Supernovae, was performed in November 2016; the most recent, Possible Universes, in May 2017: All to critical acclaim.  See reviews on AllAboutJazz.com, FreeJazzBlog, the New York City Jazz Record and elsewhere.

Pickman Hall is a truly state-of-the-art chamber music auditorium at the Longy School of Music in Cambridge, MA.  Peter Cassino, who played the piano part in the first two PEK scores for LOFO, is the Chair of the Modern American Music Department at Longy and has an excellent improvisation ensemble with Glynis Lomon.   He has generously offered us the use of this fabulous auditorium.  Thanks so much Peter!! 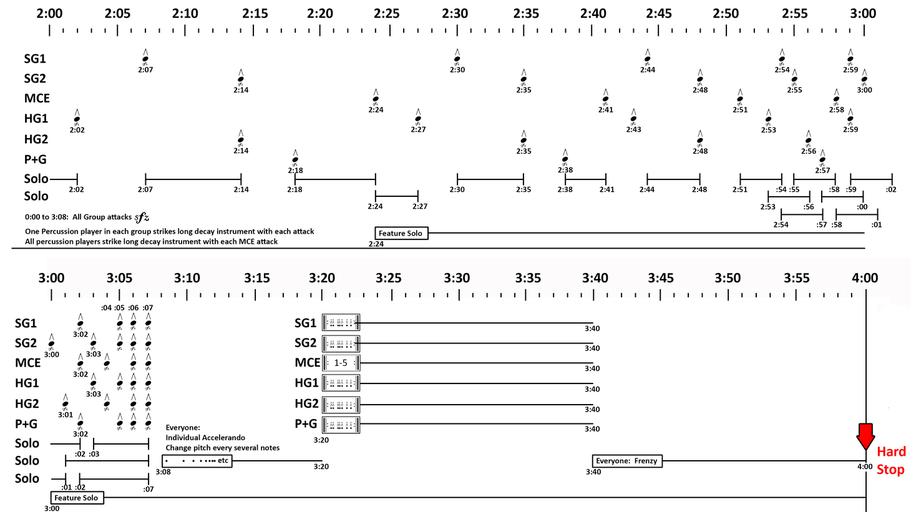 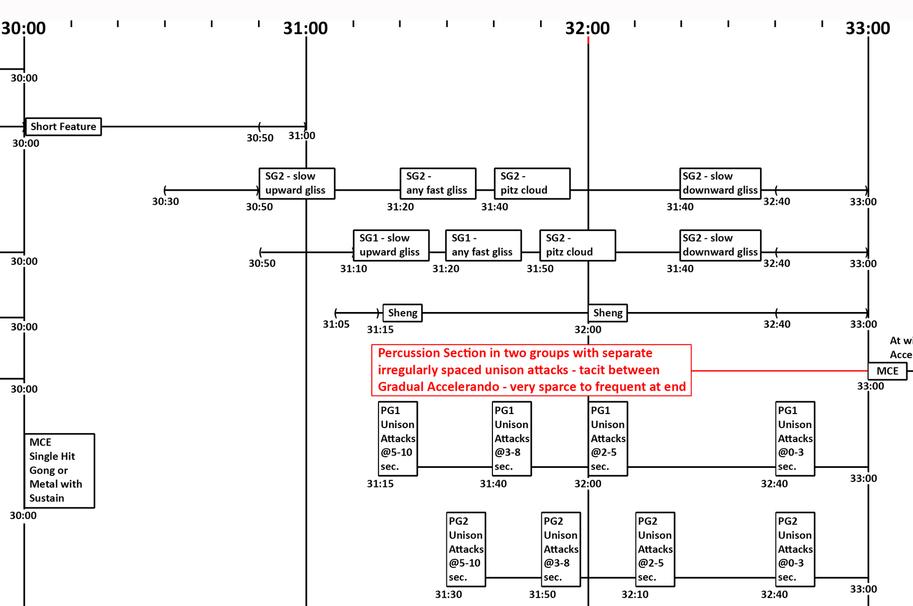 ​Twice a year, I compose a new score for the full orchestra (roughly 25 players) drawn from the roster, utilizing frame notation to control who is playing at any given point in the performance with time code displayed to the ensemble  on a large digital sports clock.  The score is simultaneously a Density and Sonority map defining the development of the work.  I write some English Language directions in the score defining pre-planned sonorities.  I use some simple graphic symbols to create group actions that are controlled by downbeats executed by group leaders.  The groups each contain 3 or 4 people and are Low Horns, High Horns, Low Strings, High Strings, Piano & Guitars, Percussion 1 and Percussion 2. Also available are the named sub-units listed above.  I used these techniques in Expansions, performed at Mobius in 1994, although that composition included far more notated melodic material than I use for the LOFO scores.

​So far we have performed 3 scores:  The Expanding Universe, Supernovae and Possible Universes.   I am giving all of my compositions for the LOFO astronomical titles - It seems fitting with the scale of these events and fits well with my usual Leap of Faith titles which largely draw on Scientific and Mathematical ideas.

These scores are very special compositions intended to solve a very tricky problem of composition for large improvisation ensembles:   How do you rehearse complex works for large ensembles when all of the participants are extremely busy?  Answer:  compose works that do not need to be rehearsed.  The use of the timeline along with the lack of conventionally notated harmonic, rhythmic and melodic information make it possible to perform these scores without ever having previously played them.  We rely on all of the work of the overall Evil Clown project to tighten the ensembles' improvisation across its many cross sections while the score provides directions on timing, sonority and transformation.

Each of the scores has continued to utilize the compositional devices of the previous scores while adding something new to my notational system.   Some examples are large texture blocks with much of the ensemble playing auxiliary instruments (like wood or metal texture), using the decay from large gongs as structural divisions of the work to pivot into a new sonority, group action frames assigned to named groups in the ensemble (see below), and changing the scale of the score so each page covers less time on the timeline and therefore more detailed events can be expressed on the score.  The events have therefore become shorter on each score, thereby significantly increasing the rate of transformation.

For SuperClusters, I realized that there is no reason why the musicians cannot pay attention to the second position of the sports clock when tracking the time.  It is just as easy to trigger an event at 2:17 as it is on a nice round number like 2:30.  The difficulty is in clearly expressing the directions with the notation.  The solution is to change the scale of the score to one minute in width on each page - the parts will have two systems on each page with the lower system repeated at the top of the next page to assist with page turns.   I have used this scale for the opening and conclusion sections of SuperClusters, and used the 3 minutes per page with 2 minute overlap scale from Possible Universes for the balance of the work (the first two scores used a scale of 5 minutes per page with 2 minute overlap).

The big new idea of the score relies on this 1 minute scale.  The work opens with an accelerando over the first 3 minutes.   Six different action groups have unison single attacks spaced on a reverse Fibinachi series - the attacks get progressively quicker in an irregular fashion.  Each of the attack groups plays their series at a different time-scale.  The net effect is a system of irregular attacks increasing in frequency and converging just after the 3 minute mark.  Each attack group will also include a single strike on a metal instrument (gong or bowl) that has a lengthy sustain.  Some of the time the gong decay will ring out while the ensemble remains tacit, but some of the time a soloist will play a very brief solo from one attack to the next.

The first four minutes of the score are below.  This is still a draft - I will add detail later to indicate which ensemble member will cover each of the short solos, dynamic markings and other notations. 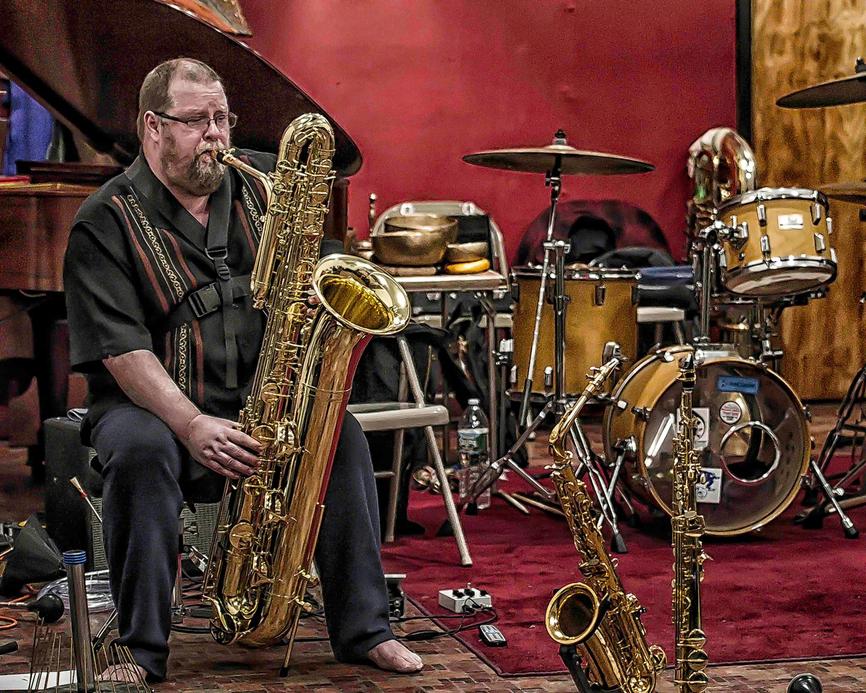