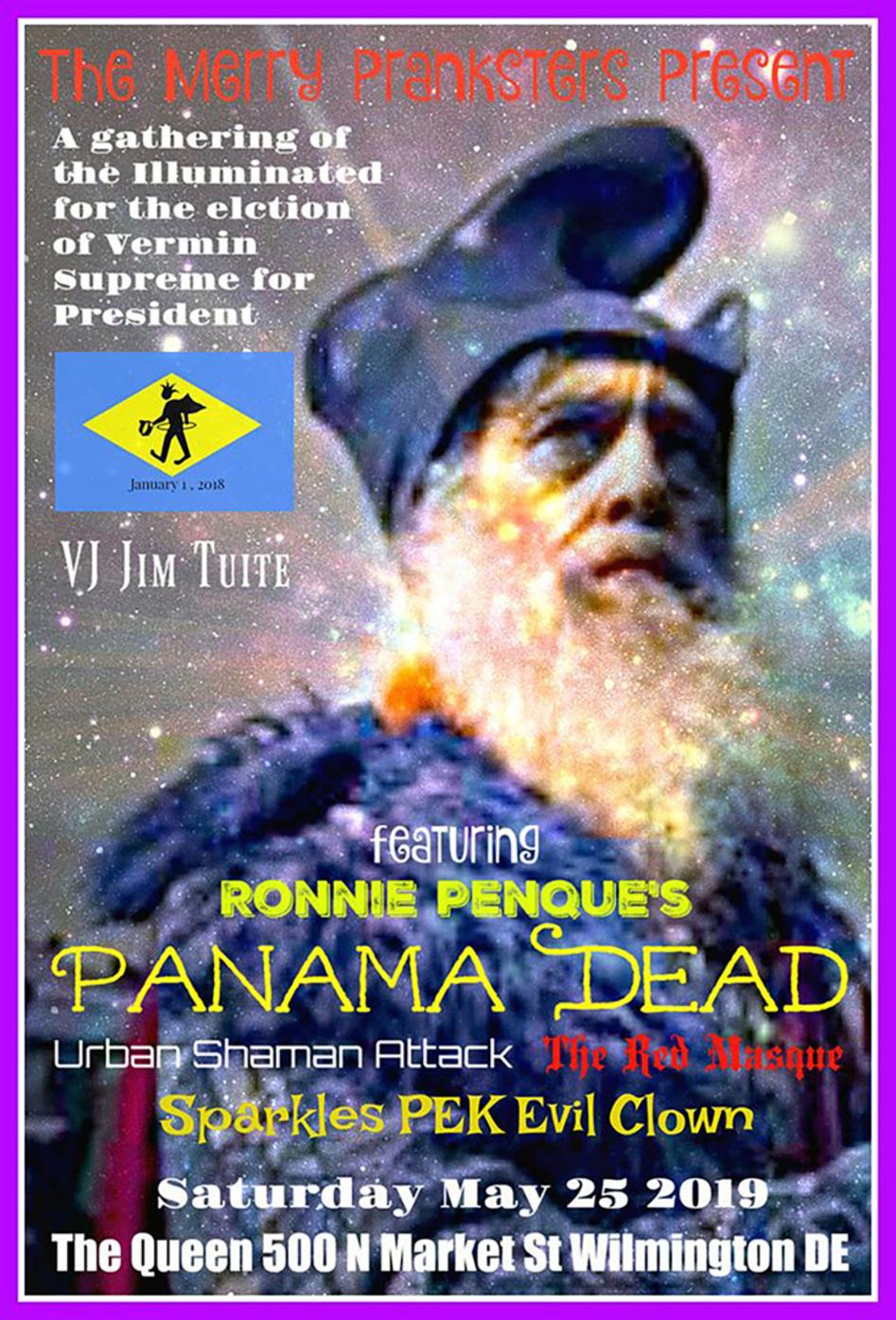 As of this writing (27 May 2019), MCE has 40 or so albums, mostly recorded at Evil Clown Headquarters as a studio project along with 3 or 4 live performances. The broad pallet aesthetic of the MCE relies on a huge amount of equipment which allows for huge transformations across sonority. The amount of equipment involved makes mobilization to a venue a real issue – therefore, the studio nature of the bulk of this project. Since the MCE core unit is Yuri and PEK and we usually have guests, there are some repeating MCE Editions with mostly the same players. These include a mostly percussion MCE, a heavy electronics MCE, and a few other variations.

We were invited several months ago to travel to Wilmington Delaware to participate in a concert supporting Vermin Supreme for President by our facebook pals from Urban Shamen Attack. The Merry Pranksters event featured performances by 4 psychedelic rock bands along with great computer video projection by Jim Tuite… We decided to bring MCE for this show, but decided to push it more in the rock direction than usual by adding electric bass – creating a Power Trio Edition of the band with just drums, bass and a few of my horns. Initially, we had Albey onBass covering the bass part; Albey showed up in Boston last summer long enough to do about 10 Evil Clown sets in several of the different bands, but then he got a great opportunity to relocate to New Orleans and he took off (We miss you Albey!). Until a month or so before the Vermin Supreme show we though he would still make it, but finally I heard he would not be able to pull it off.

So, we conducted a quick search for another electric bassist who could fill Albey’s huge shoes. We contacted a few of our regulars who all had conflicts and then we dug deeper. Yuri eventually came up with Mike Gruen, who really shreds, no doubt. Yuri and Mike had played together in very different settings, but never anything like MCE which is purely improvised. We had Mike over to Evil Clown Headquarters for a warmup set for the Vermin Supreme show a few days before and we really hit it off!

It is a long drive from Boston to Wilmington and our set was the first in a long string of acts for the night. Yuri and I left at 9 am to make it in plenty of time for our 4:30 start time since it was the Saturday of Memorial Day Weekend, and we anticipated traffic getting around NYC. Mike traveled separately, since he had a church gig the following morning, but somehow we got the times all confused and he thought our start time was 6:00 pm. While on the road we talked via cell and realized he was about 90 minutes behind us. Mike drove like a mad man to make up lost time, but still did not quite make the early start. Yuri and I did about 30 minutes of duet while we waited and then when Mike showed up, we got him on stage as fast as possible and did a shorter second set to complete our hour. Then Mike turned around and drove right back home…

While we were disappointed that Mike missed a chunk of the show, when he arrived after 6 hours of frantic driving, he mounted the stage in a frenzy. The Serpent King demonstrates what a real Metal Chaos Ensemble Power Trio Edition can deliver!! The flow of the whole set is still excellent, and actually has a nice shape with 2/3 duet followed by 1/3 trio at a whole other energy level. Look for more of Metal Chaos Ensemble Power Trio Edition, brought to you soon by Sparkles the Giant Evil Clown!! 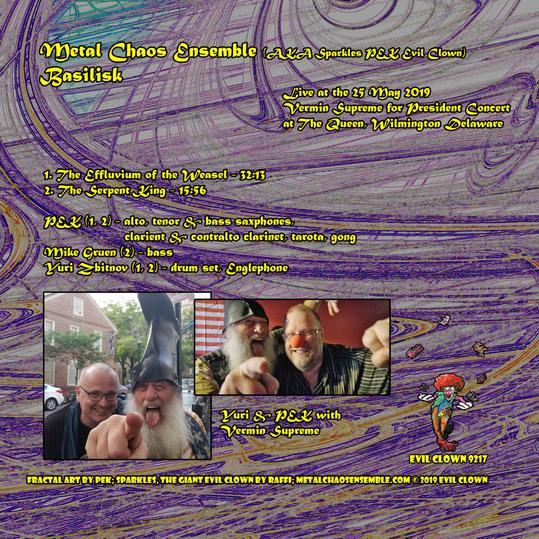 “… Like most discs by LoF or Metal Chaos, this begins quietly, slowly and builds from there. The ever mighty drummer, Yuri Zbitnov, sounds great and is at the center of trio whipping up a rhythmic storm. PEK concentrates on one reed at a time, with inspired solos on bass sax, regular & contralto clarinets, and the other two saxes. Since PEK has fewer reeds to choose from, his solos are longer, giving us time to appreciate each one…  This is one is very organic and flows superbly throughout. 4 & 1/2 stars!”
- Bruce Lee Gallanter, DMG

"Formed in 2015 by reedist and multi-instrumentalist David Peck and percussionist Yuri Zbitnov to explore chaotic rhythms on metallic instruments, using the now extended arsenal of exotic percussion instruments the collective has amassed in this 2-part album with Mike Gruen on electric bass creating a power trio of unusual rhythmic intention." 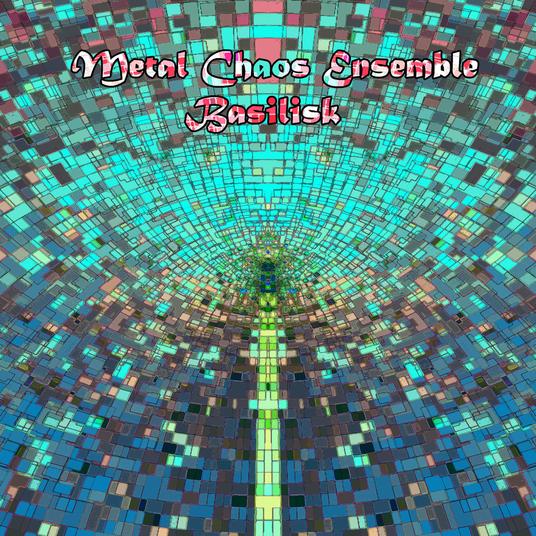 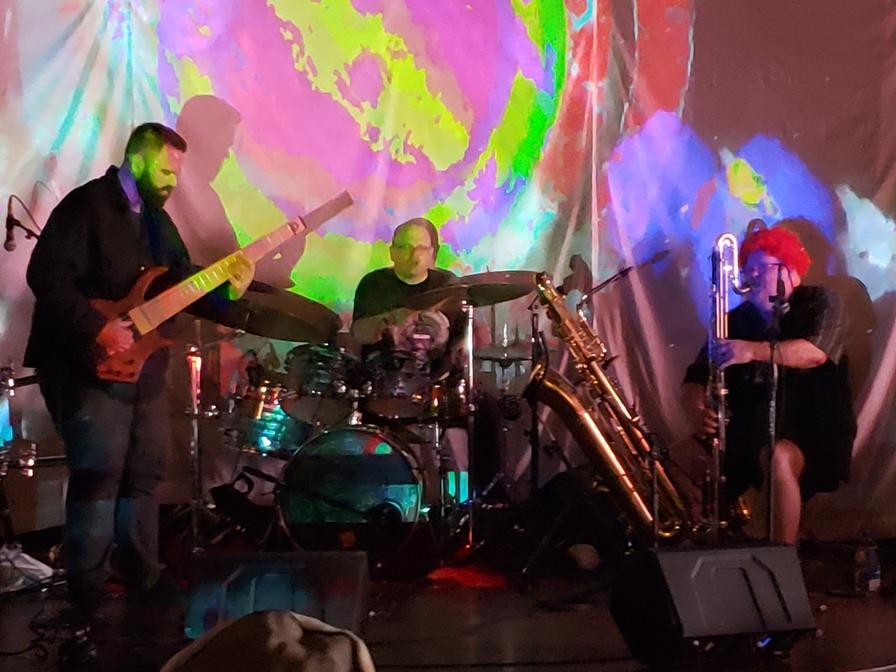 METAL CHAOS ENSEMBLE With PEK / MIKE GRUEN / YURI ZBITNOV - Basilisk (Evil Clown 9217; USA) Featuring PEK on alto, tenor & bass saxes, clarinets, taragato & gong, Mike Gruen on bass and Yuri Zbitnov on drums & Englephone. This was recorded live at The Queen in Wilmington, Delaware in May of 2019. This is the smallest version of the Metal Chaos Ensemble, just a trio with the two founding Leap of Faith members: PEK and Yuri Zbitnov. This disc is dedicated to someone named Vermin Supreme, who looks like a viking and is wearing a rubber boot on his head?!? The majority of the 100 CD’s from Leap of Faith and their half dozen offshoots bands were recorded in the Boston area, expect for a couple of discs recorded on a trio to NYC at DMG and The Spectrum. This makes this disc a rarity since it was recorded in Delaware. Another rare occurrence is PEK only playing six reeds & a gong and Mr. Zbitnov just playing drums and something called an Englephone. Like most discs by LoF or Metal Chaos, this begins quietly, slowly and builds from there. The ever mighty drummer, Yuri Zbitnov, sounds great and is at the center of trio whipping up a rhythmic storm. PEK concentrates on one reed at a time, with inspired solos on bass sax, regular & contralto clarinets, and the other two saxes. Since PEK has fewer reeds to choose from, his solos are longer, giving us time to appreciate each one. Some of the Metal Chaos Ensemble sessions can be over the top and demanding to hear at length. This is one is very organic and flows superbly throughout. 4 & 1/2 stars! 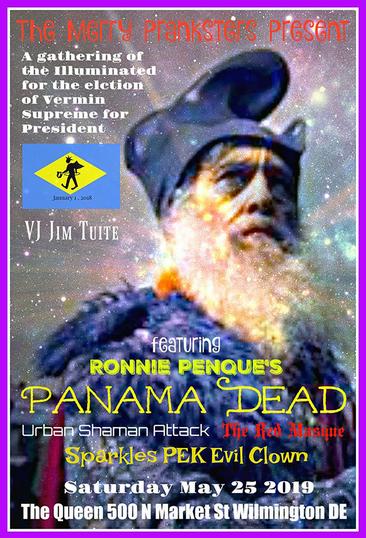