​Here are links to the last year’s worth of MCE albums where we develop this electronics heavy improvisation concept. 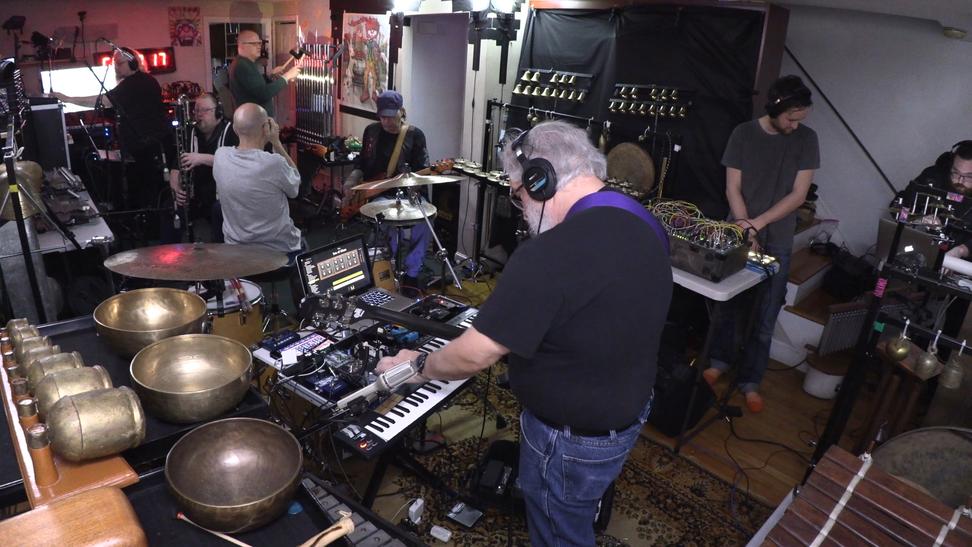 Beyond the Holy Mountain

Usually the Metal Chaos Ensemble features multiple percussionists but for this release, there is more electronics than percussion. Longtime LoF percussionist, Yuri Zbitnov, does a bit of recitation (from the ‘Holy Mountain’ Jodorowsky film) with his voice bathed in reverb, during the first section. As is always the case, the sound here is clean, superbly recorded. Starting sparsely at first, with the space trumpet and soft electronics simmering underneath. The music starts to escalate, the electronics kinda like a Gong space jam played in the distance. Building, expanding, the electronics getting more dense, a some tribal-like percussion at the center from the irrepressible Yuri Zbitnov and Albey on el. bass. The analog electronics, laptop and computer gives things a more ancient sound (early seventies). This 70 minute piece evolves like a scientific journey, sailing through the stars, and eventually the somewhat disorienting recitation reappears near the end. From Art Ensemble spirituality to Gong-like space journey, where will the Leap of Faith Offshoot Express end up next?!?

“… Starting sparsely at first, with the space trumpet and soft electronics simmering underneath. The music starts to escalate, the electronics kinda like a Gong space jam played in the distance. Building, expanding, the electronics getting more dense, a some tribal-like percussion at the center from the irrepressible Yuri Zbitnov and Albey on el. bass. The analog electronics, laptop and computer gives things a more ancient sound (early seventies). This 70 minute piece evolves like a scientific journey, sailing through the stars, and eventually the somewhat disorienting recitation reappears near the end. From Art Ensemble spirituality to Gong-like space journey, where will the Leap of Faith Offshoot Express end up next?!?”
- Bruce Lee Gallanter, DMG

​With a core of Leap of Faith members (PEK & Yuri Zbitnov) along with trumpet, bass, computer & electronics, Moog, and analog synth, this rendering of Boston's far-ranging collective, using David Peck's framework compositions and arsenal of instruments, takes their listeners through controlled cosmic chaos with recitation and electronic companionship; wild! 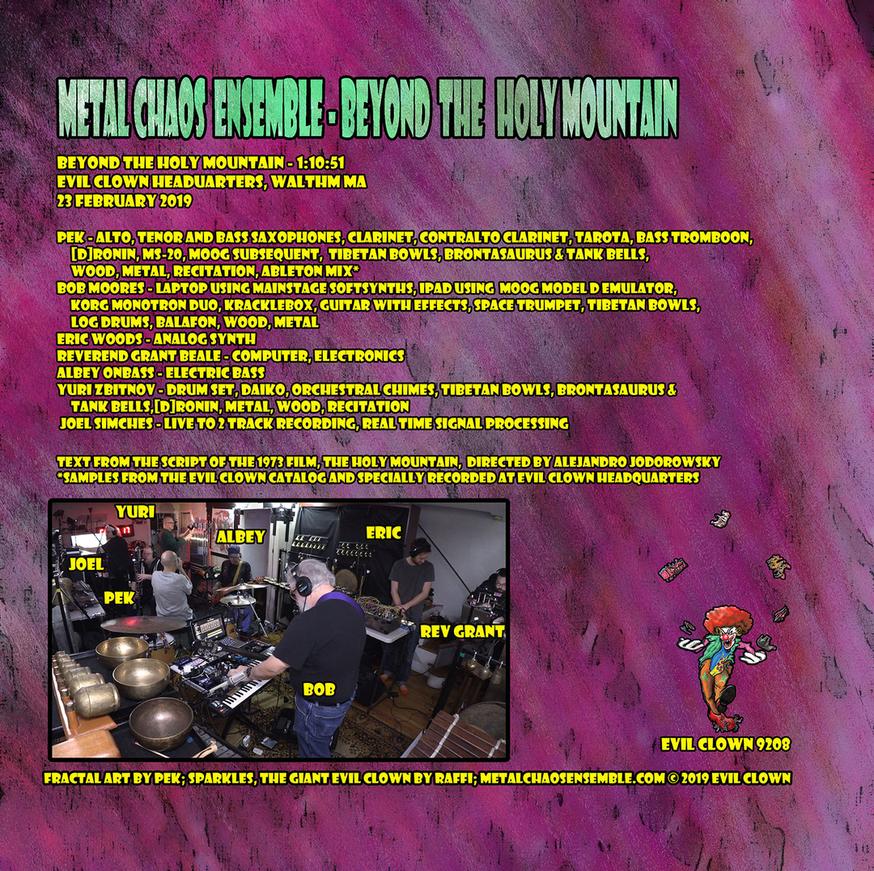 For around 2 years now, I have been using the Ableton software to create electronic mixes which we use in several of the bands as an accompaniment track. In performance, I ride the fader from off to very present, but most of the time more to the background. Raw samples are taken from the Evil Clown Catalog and also specially recorded at Evil Clown Headquarters with instruments drawn from the Evil Clown arsenal. I then use Adobe Audition to process the samples and finally Ableton to assemble a timeline and create a mix. Most of the more recent MCE sessions use one of these mixes.

MCE has had many different formations, but for about a year we have really focused more on an electronics/percussion blend. In addition to the Ableton mix, we now have regular Eric Woods on analog synth, trumpeter and guitarist Bob Moores is bringing a bunch of electronic instruments, Reverend Grant Beale on computer/electronics instead of his customary guitar, and several synths and a great AKAI wind controller in the Evil Clown Arsenal. With this many electronic instruments the mix has become complex enough that I get Joel Simches to come and run the recording board. We’ve had 8 MCE sets since February 2018 which are variations on this general scheme (see below). Albey onBass is a brilliant electric bass and electric upright bass player who has been a heavy presence in the Evil Clown scene since July of last year – He is on three of these sets. Albey played with Cecil Taylor extensively prior to Cecil’s passing. Albey and Jane are moving back to New Orleans quite soon – we will miss him, but wish him well!!!

Due to the massive set of equipment required for a proper MCE session, we have staged only a few public performances and most of the 40 albums recorded since 2015 are studios sessions recorded at my home studio, Evil Clown Headquarters. Since fall of 2018, we have been LIVE STREAMING these performances in addition to my regular posts on bandcamp, YouTube, & soundcloud, and a number of internet stores for CDs and downloads. This performance is the first one to use a multi-camera mix for the LIVE STREAM. In the fall, I got a new computer and the hardware to do it, but the video capture card I got to send the video mix into the computer was really fussy. I did more internet research and ordered one from Japan that video gamers use. It took a while to show up and then a while before I had time to attempt the full set up, but that time has come – look forward to more ECH shows on Youtube and eventually other streaming platforms!

This album title refers to an amazing psychedelic movie from 1973 called Holy Mountain (directed by Alejandro Jodorowsky). It is a genius work of symbolic story telling with an amazing soundtrack by Don Cherry. Yuri and I love this movie, and though we usually do not make references to pop culture we are making an exception in this instance. I found a bunch of excerpts of the dialog on the web, printed them out and Yuri and I take turns reciting the text…

Here is one the excerpts we used:

"The grave receives you with love. Surrender yourself to the Earth. Return what was loaned to you. Give up your pleasure, your pain, your friends, your lovers, your life, your past, what you desire. You will know nothingness, it is the only reality. Don't be afraid, it's so easy to give. You're not alone, you have a grave. It was your first mother. The grave is the door to your rebirth. Now you will surrender the faithful animal you once called your body. Don't try to keep it, remember, it was a loan. Surrender your legs, your sex, your hair, your brain, your all. You no longer want to possess, possession is the ultimate pain. The earth covers your body, she came to cover you with love, because she is your true flesh. Now you are an open heart, open to receive your true essence your ultimate perfection. Your new body, which is the universe, the work of god. You will be born again, you will be real. you will be your own father, your own mother, your own child, your own perfection. Open your eyes, you are the earth, you are the green, you are the blue, you are the Aleph, you are the essence. Look at the flower, look at the flower, for the first time look at the flowers.” 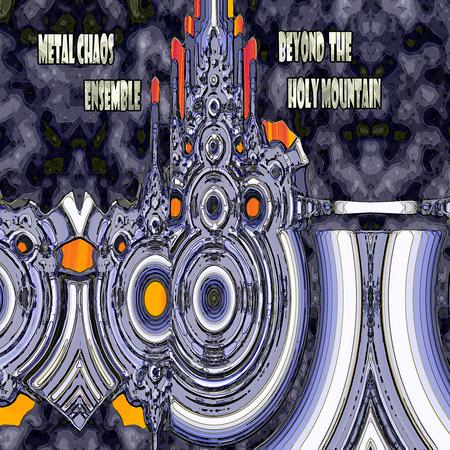 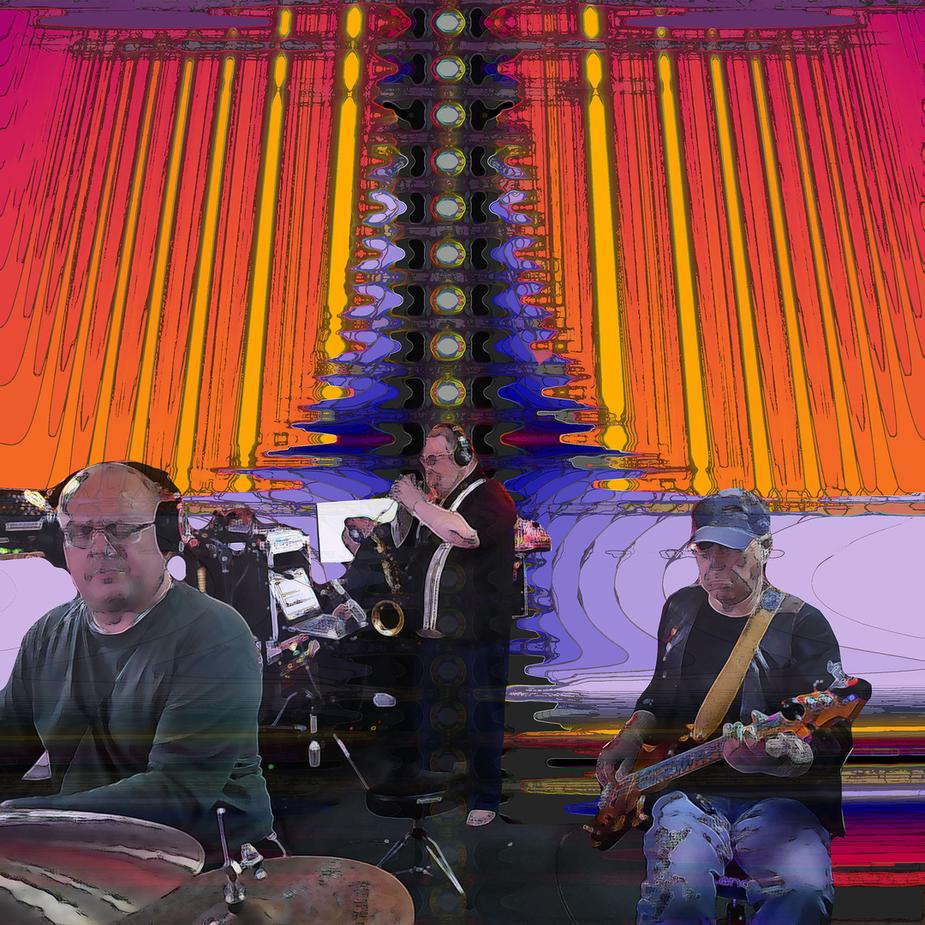