"Cryptomorphism (Evil Clown 9181; USA) Personnel: PEK on clarinets, alto, tenor & bass saxes, Moog, daxophone, assorted percussion, etc, Bob Moores on space trumpet & guitar, Eric Woods on analog synth & balafon, Reverend Grant Beale on guitar & laptop, Yuri Zbitnov on drums, balafon and assorted percussion plus Joel Simches on processing. This session of Leap of Faith offshoot, Metal Chaos Ensemble, was recorded at the Evil Clown Headquarters in June of this year (2018). As with other recent versions of the Metal Chaos unit, this one is a quintet with a Joel Simches doing live processing. Everyone involved here but the drummer, plays some sort of electronics or effects in addition to their regular instruments. This set begins quietly with spacey effects simmering underneath, slowly PEK enters on haunting (bass?) clarinet and Yuri on cymbals or metals of some sort. Certain mysterious sounding instruments enter one at a time: space trumpet, quietly disorienting electronics, orchestral bells, haunting sounds often hard to identify. For this session, the MCE are at their most cerebral, spacious and superbly recorded. Like entering a slightly disorienting dream-world." 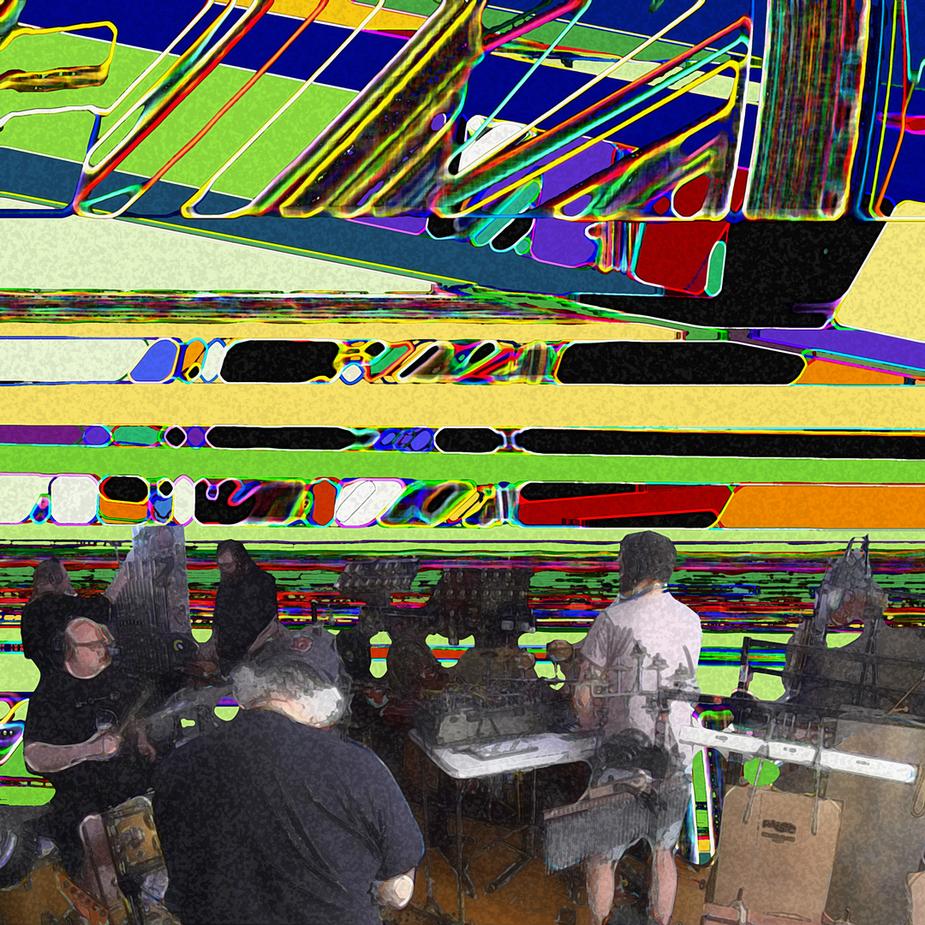 Liner Notes by PEK
Metal Chaos Ensemble was formed in early 2015 by PEK and Yuri Zbitnov as a working project to explore chaotic rhythms on metallic instruments. I had started to amass the Evil Clown Arsenal of percussion, electronic and wind instruments and we needed a workshop to develop this universe of sounds for the Leap of Faith Orchestra. It was immediately obvious that Metal Chaos Ensemble had a sound to itself and over the last three years has been one of the most prolific Evil Clown ensembles. We have produced a bunch of albums covering a wide range of sonority sets, but always with the presence of Gongs, chimes, glockenspiel, Tibetan Bowls and many other metallic sounds and the horns of PEK. All Metal Chaos Ensemble sessions include at least myself and Yuri, along with a whole bunch of different guests.

One of our recent Evil Clown recruits, Eric Woods, is skilled with the analog synth… I had been trying to acquire such a player for the orchestra for some time. Eric is familiar with the early history of analog synths in Europe by composers like Stockhausen, Pierre Henry and others. The original electronic music was analog, classically oriented and principally about transformation of sound. Most contemporary electronic music is not concerned with these original objectives, but they are not that different than my goals for Leap of Faith Orchestra and the related smaller Evil Clown ensembles. Welcome Eric to Evil Clown!

Since Eric has joined us, he has participated in a number of sets with different Evil Clown ensembles. Among these are two Metal Chaos Ensemble sets at Evil Clown Headquarters (Shape Memory, Blast Furnace) featuring Bob Moores (an Evil Clown regular for several years now) and two Leap of Faith Orchestra Sub-Unit performances featuring our regular guitarist Reverend Grant Beale (Truth Tables from LOFO&SU Deductions, and Observer Effect from LOFO&SU Refuting Leplace’s Demon). These several performances blending analog synth and guitars with the Evil Clown improvisation language is a new direction for the project – a bit more oriented to the world of rock-based improvisation.

The big breakthrough for this session is to have both guitar players, Eric, Yuri and myself do the full length set at ECH where all of the gadgets are. Like the last session (Blast Furnace), we are joined by Joel Simches on real time signal processing and live-to-two-track mix. Joel’s presence really enabled us to up the ante on the set up and we used basically every input on the mixers for some signal in the room. We have been expanding the Evil Clown Arsenal now for years to continually broaden our color palette… With the addition of Eric and these other new resources, Cryptomorphism is the most completely realized electro-acoustic improvisation to date anywhere in the Evil Clown universe! Look for more of this version of Metal Chaos Ensemble in the future!!

"...  This set begins quietly with spacey effects simmering underneath, slowly PEK enters on haunting (bass?) clarinet and Yuri on cymbals or metals of some sort. Certain mysterious sounding instruments enter one at a time: space trumpet, quietly disorienting electronics, orchestral bells, haunting sounds often hard to identify. For this session, the MCE are at their most cerebral, spacious and superbly recorded. Like entering a slightly disorienting dream-world..."

“Whatever processes are at work, there is an absolutely industrial hum that underpins everything, something out of David Lynch or Stanley Kubrick's nightmare visions of a decaying city…   Far from entropy however, Peck and this particular ensemble create music of astonishing vigor, and diversity. If I posit that it's a busier and more technologically pervasive version of early AMM, that is in no way to deny its originality, only to offer a point of comparison. We are given vast plains of sound to explore and revisit, as each audition brings forth layers as yet unheard.”

"The Boston ensemble of unique instrumentation layering percussion, bowed and struck metal, synth, vibes and other percussive devices, whose core players are drawn from the Leap of Faith ensemble, is joined by Eric Woods on analog synth, along with two guitar players and Joel Simches on real time signal processing, allowing for an expanded palette of sound."
- Squidco webite staff

"I am beginning to wonder whether there is a compositional aesthetic at work on David Peck's ensemble discs. Yes, improvisation is certainly integral to whatever aesthetic Peck and company bring to the table, but something more complex may be determining, or at least guiding, the always engaging and often perplexing music as it unfolds.

As with Peck's other ensembles, everybody plays multiple instruments, but here, certain threads of sonic perspective seem to be interweaving at strategic moments which, to these ears, threaten to place the diverse music beyond the whims and whiles of improvisation. Let's examine the moment, at around 14:30, when long tones emerge from what was already largely a series of near drones. These spiky electronic exhortations bloom and fade, echoing and propelling the rest of the ensemble along a similar path. In fact, similarly employed electronics function as a kind of backdrop throughout the hour plus track. It's especially audible when drums and guitar fade suddenly at 23:14, laying bare a quiet but almost cinematic palimpsest of tone and overtone in joust. Again, that sudden fade may speak to something other than pure improvisation at play. Whatever processes are at work, there is an absolutely industrial hum that underpins everything, something out of David Lynch or Stanley Kubrick's nightmare visions of a decaying city.

Far from entropy however, Peck and this particular ensemble create music of astonishing vigor, and diversity. If I posit that it's a busier and more technologically pervasive version of early AMM, that is in no way to deny its originality, only to offer a point of comparison. We are given vast plains of sound to explore and revisit, as each audition brings forth layers as yet unheard. Peck's soloing is not quite as often in evidence here as in other contexts, and the whole is more an oceanic study in slowly evolving contrast than in instrumental prowess, though it is far from absent. The notes say, intriguingly, that samples were taken from the Evil Clown archive, which, in combination with this excellent release, has the disquieting effect of making me want to hear as many discs from this fine label as possible." 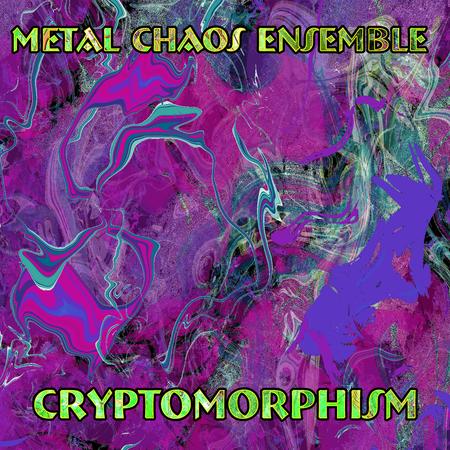 Samples from the Evil Clown Catalog 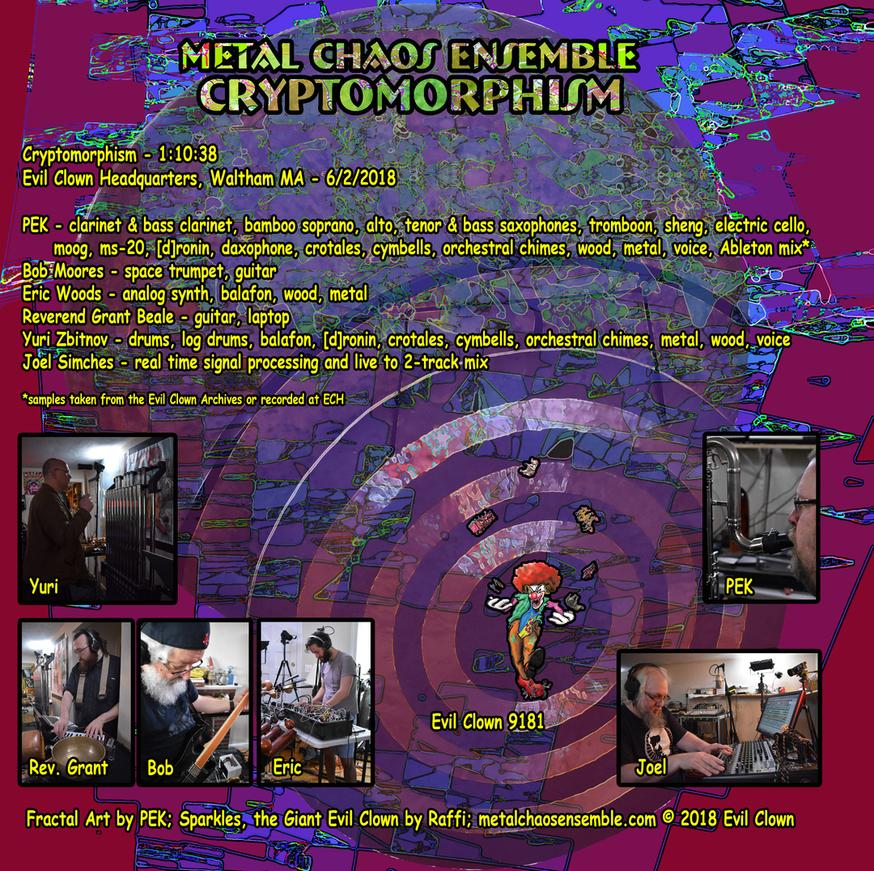