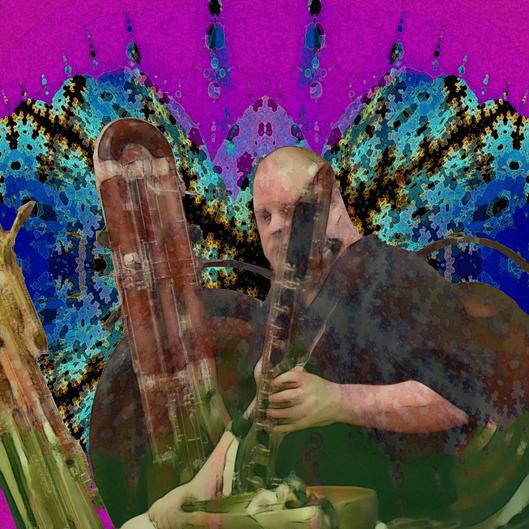 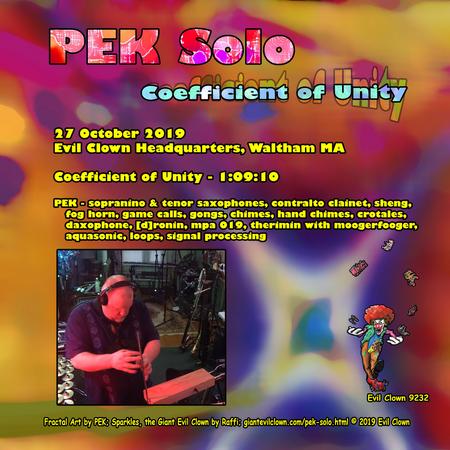 PEK - Solo - Coefficient of Unity (Evil Clown 9232; USA) Featuring Dave PEK on sopranino & tenor saxes, contralto clarinet, sheng, fog horn, game calls, gongs, daxophone, theremin, synth, aquasonics, percussion, loops and processing. Of the more than a half dozen Leap of faith offshoot projects, PEK solo efforts are the most rare. This disc was recorded at Evil Clown Headquarters in October of 2019. Considering that Leap of Faith founder, Dave PEK, now has more than a 100 discs on his Evil Clown label, which only goes back 5 years (since 2014), he has learned how to produce vast amounts of inspired improv discs from solos to his LoF Orchestra. PEK collects instruments, especially multiple reeds and often works with one instrument at a time although he does some live overdubbing, processing or sampling. This disc starts with what sounds like bowed wood, perhaps a daxophone? Things unfold slowly, carefully as PEK concentrates on one or two instruments at time, occasionally manipulating their sounds. PEK is also a strong producer, carefully crafting each sound, using selective amounts of delay or effects. There is short section of electronics (synth or theremin?), midway that sounds great, a bit spooky but well-placed. Since PEK takes his time, he is able to concentrate on each instrument, often quietly conjuring up inspired free spirits, drifting in and drifting out. Always compelling, thoughtfully crafted. 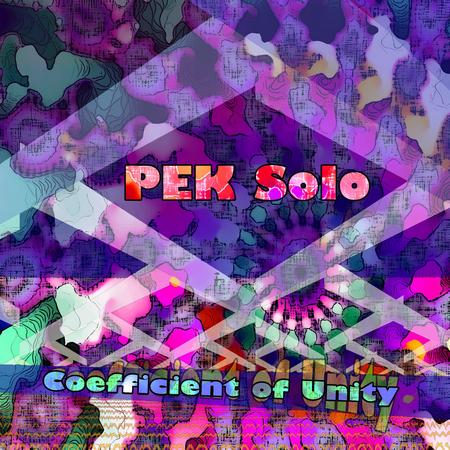 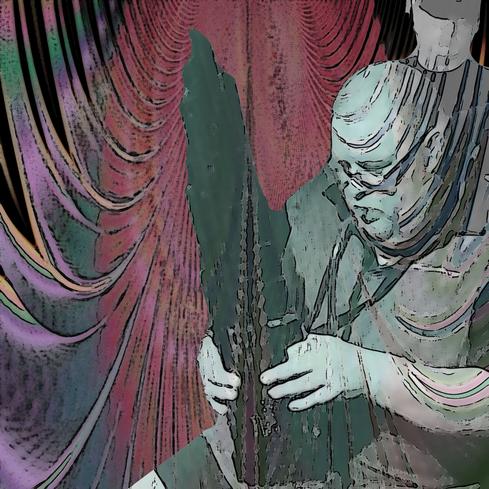 ​Occasionally there is a break in the Evil Clown schedule and I have a little time for a solo session. In the 90s, I did solo performances occasionally - which presented several challenges. I like to work in a long form with lots of instrument changes, so I came up with several tricks for rapidly changing horns while continuing the improvisation...

Recently, I have been using the Ableton software to create electronic mixes which we use in several of the bands as an accompaniment track. In performance, I ride the fader from off to very present, but most of the time more to the background. Raw samples are taken from the Evil Clown Catalog and also specially recorded at Evil Clown Headquarters with instruments drawn from the Evil Clown arsenal. I then use Adobe Audition to process the samples and finally Ableton to assemble a timeline and create a mix.  Several of my solo records have used these mixes. The accompaniment track neatly solves the problem of transitioning instruments.

For this set I decided to take a different approach.  Instead of a pre-recorded Ableton mix, I used a batch of effects stomp boxes along with the theremin, [d]ronin, daxophone and the newly arrived mpa 019.  I recorded a loop with the mpa 019 and set up long delays on the other instruments and a moog ring modulator on the theremin.   Several of these options create sounds that persist over time, so as the improvisation unfolds sometimes I have sometimes have several simultaneous sets of sounds and sometimes decay from these devices available to cover transitions between instruments.

One thing I really like about solo sessions is that I can do them spontaneously.   I worked all day Saturday on the new Frame Notation Score, Systems of Celestial Mechanics, and was planning to continue on Sunday.  As I was starting the day, I changed my mind and did this recording instead.  I’m super happy with the result which contains fairly long sections (4 to 5 minutes) of focused solos of the horns I used (sopranino & tenor saxophones, contralto clarinet & sheng) as well as a bunch of the metal percussion and weirder electronic instruments ([d]ronin, mpa 019, daxophone, theremin) often sounding together…