Every once in a while, there is a break in the crazy schedule here at Evil Clown and I have some time to do a solo album. Our grand olde pal, the Corona Virus has provided such a break in spades…. At the beginning of the 2020, it appeared that the year would be our busiest yet… We did a bunch of albums in January, February and the first weeks of March, and then I was forced to cancel a bunch of wonderful performances scheduled for the months that followed. So, I caught up all my old business: web site, social media, distribution, and the other non-musical activity required to drive the enterprise. Then I took a month off… my biggest rest since I started up in 2015 after my long hiatus. In mid-May I started up again, conceiving some new means of producing some of the enormous output normally achieved by Evil Clown. In the Fall I did a huge series of solo works along with a few Metal Chaos Ensemble sets.

Now entering the second calendar year to be affected by the Stupid Virus, I really miss playing with others… For obvious reasons, I have been producing a lot more PEK Solo albums than I do typically. I conceived a structural schema for producing solo works while we wait for the virus to be over. As with larger ensemble Evil Clown sessions, the planning involves selecting sound resources from the massive Evil Clown Arsenal and setting up the studio with these instruments to allow rapid changes in instrumentation and therefore in sonority. This system provides a framework to create solo works that are sufficiently different from each other that I can continue to produce new work at something close to my usual rate even while I can’t perform with others.

The PEK Solo albums fall into four categories:
1) One continuous track (no overdubbing) of PEK playing one or many instruments with or without signal processing.
2) One continuous track of PEK playing one or many instruments with a prerecorded mix of samples drawn from the Evil Clown Catalog or specially recorded at Evil Clown Headquarters. Solo albums from before 2020 fall into the categories 1 & 2.
3) A Quartet of PEKs – Four continuous tracks of one PEK each playing many instruments on each pass. Three of these albums, Schematic Abstractions for the Clarinet Family, Fixed Intentions for the Saxophone Family, and Completeness for Flutes and Double Reeds use very focused palettes. Other Quartet of PEKs releases use broader palettes comprised of woodwinds, percussion, electronics, and strings.
4) An Orchestra of PEKs – Many tracks of PEKs performing on a broad section of the Arsenal. The last two of these, Semantic Notions and Some Truths are Known, are mammoth 4-hour studio constructions / compositions in 3 eighty-minute movements.

The current set, Decision Boundary, is kind of between category 1 and category 2. I play a bunch of the smaller woodwinds, melodica, and gongs, but use a Loop Station to build up a sequence of accompaniment textures in the real time of the performance. The loops act like the prerecorded elements of a category 2 work, and the performance unfolds with all decisions made in real time like a category 1 mix.

One aesthetic problem requiring a solution when performing long solo works on many instruments is how to continue the sound through the time required for instrument changes… Of course, the looper does exactly this since the loop will continue to cycle even when it is taking no input from the live playing. This is freeing, since I have time to think ahead as I make changes in instrumentation, and time to do more careful reed prep as I change horns. When using many instruments, you don’t have the option of warming up each instrument and spending time on the reed before the set starts. Even if you could, there might be 30 or 45 minutes before you use a particular horn, by which time the reed can easily dry and require treating again…

I like this format, since I like the completeness of the real time gesture… I’ve used the looper before, but never for as much of the length of the work as is present here. I think I will repeat this format for my next set, but with large woodwinds. This should produce a work of similar structure, but with a very different sonority set…

Until the stupid virus is over and more normal interactions are possible with other people, I will continue to create PEK Solo new works using the four concepts listed above and maybe some new ones. There also may be some small group Leap of Faith and Metal Chaos Ensemble sets. Evil Clown will resume its normal routines when vaccination is widespread, and it is safe to do so. 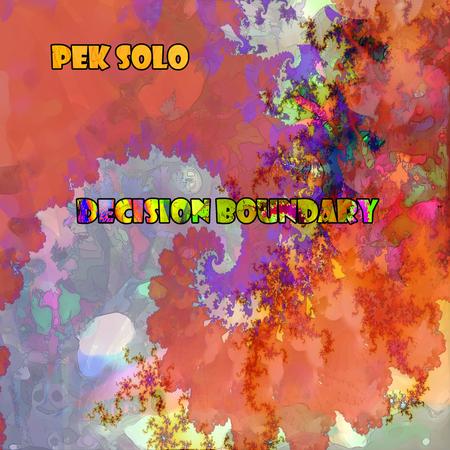 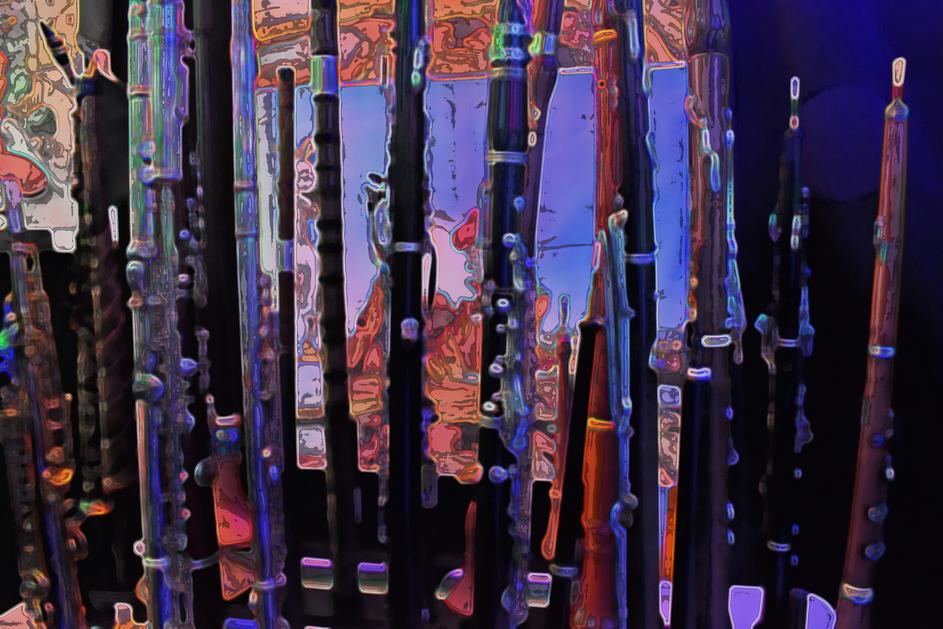 "...  The current set, Decision Boundary, is kind of between category 1 and category 2.  I play a bunch of the smaller woodwinds, melodica, and gongs, but use a Loop Station to build up a sequence of accompaniment textures in the real time of the performance.  The loops act like the prerecorded elements of a category 2 work, and the performance unfolds with all decisions made in real time like a category 1 mix.  ..." 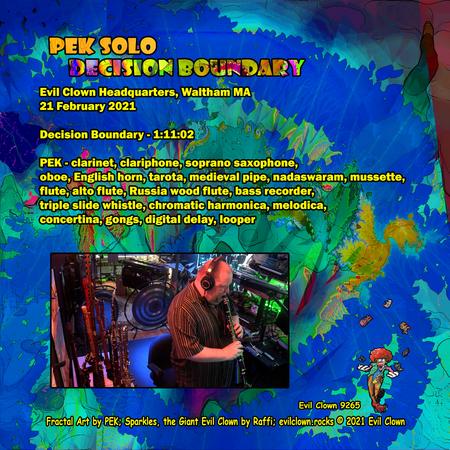