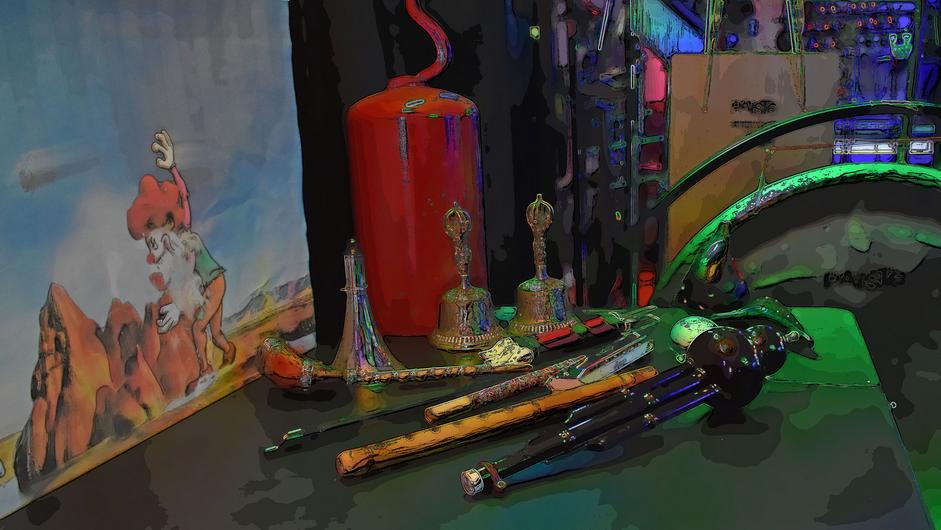 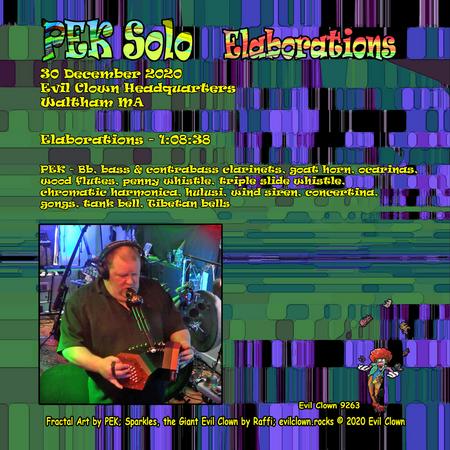 “…Even more tellingly, the use of space across Elaborations, both figuratively and literally, gives this recording a sense of potency that shows yet another side of PEK’s singular vision, be it the ritualistic atmospheres burning like sonic incense or the Coltrane-ian flights of fancy that are practically his birthright. Vital, daring, uncompromising music.”

"For the main horns I used the three Bb clarinets from the clarinet family (Bb, bass and contrabass).  I used a couple of gongs and several bells for interlude material between sections with the horns and I created some additional interludes with a bunch of other small wind instruments…   I like playing with delay in this exposed solo setting. .." 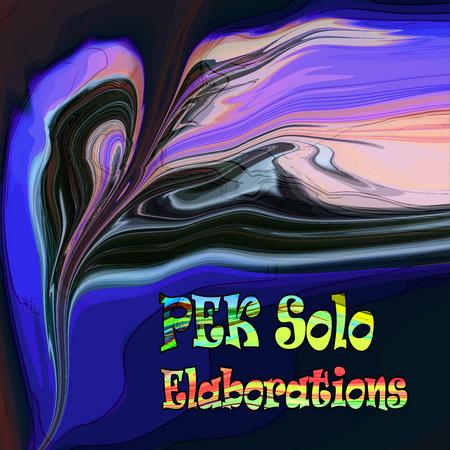 PEK SOLO - Elaborations (Evil Clown 9263; USA) Coming hot on the heels of the previous three-disc extravaganza Semantic Notions, Elaborations seems to have found Dave PEK taking something of a breather. Opening with a sharp crash of cascading bells, PEK appears to be ushering in some ancient ceremonial rite that only he is privy to. Indeed, there is a pensive, shamanic quality to this hour-plus travelogue that is one of the artist’s most introspective, meditative works yet. Snatches of silence are peppered throughout, as PEK coaxes the listener to enter various, tone-shifting dreamstates. Though ‘minimalism’ is hardly the word to describe anything Evil Clown thrusts upon the world, Elaborations certainly comes closest. PEK chooses his instruments and their placement in the stereofield carefully, almost gingerly; from those entrancing initial chimes to the foghorn sonorities of wood flutes, and goat horn, and onto his usual seancé-wrecking sax, PEK alternately fulminates and soothes, and it is that very unpredictability that maintains your attention and interest across this vast aural expanse. The oil-slick swirling mass on the CD cover ideally reflects his mutable processes; coupled with his indomitable spirit and ever-impressive command of more than a baker’s-dozen of instruments, the worlds PEK conjures never cease to amaze. Even more tellingly, the use of space across Elaborations, both figuratively and literally, gives this recording a sense of potency that shows yet another side of PEK’s singular vision, be it the ritualistic atmospheres burning like sonic incense or the Coltrane-ian flights of fancy that are practically his birthright. Vital, daring, uncompromising music.

Over the rest of the year, I managed to get in a Leap of Faith show at Eric Zinman’s Studio 34 and a few Metal Chaos Ensemble sessions with just Yuri or with Yuri and Mike… For obvious reasons, I have been producing a lot more PEK Solo albums than I do in a typical year. As with larger ensemble Evil Clown sessions, the planning involves selecting sound resources from the massive Evil Clown Arsenal and setting up the studio with these instruments to allow rapid changes in instrumentation and therefore in sonority. I leveraged the following concepts from the Evil Clown Grand Aesthetic to create solo works that are sufficiently different from each other that I could produce about 2/3 of my normal yearly output despite the stupid virus.

The PEK Solo albums fall into four categories:
1) One continuous track (no overdubbing) of PEK playing one or many instruments with or without signal processing.
2) One continuous track of PEK playing one or many instruments with a prerecorded mix of samples drawn from the Evil Clown Catalog or specially recorded at Evil Clown Headquarters. Solo albums from before this year fall into the categories 1 & 2.
3) A Quartet of PEKs – Four continuous tracks of one PEK each playing many instruments on each pass. Two of these albums, Schematic Abstractions for the Clarinet Family and Fixed Intentions for the Saxophone Family use very focused palettes. Unifications and The Strange Theory of Light and Matter use broad palettes comprised of woodwinds, percussion, electronics, and strings.
4) An Orchestra of PEKs – Many tracks of PEKs performing on a broad section of the Arsenal. The last of these, Some Truths are Known, is a mammoth 4-hour studio construction / composition in 3 eighty-minute movements. I list 110 instruments in the notes for this album….

The current session, Elaborations, is a category 1 set. For the main horns I used the three Bb clarinets from the clarinet family (Bb, bass and contrabass). I used a couple of gongs and several bells for interlude material between sections with the horns and I created some additional interludes with a bunch of other small wind instruments… I like playing with delay in this exposed solo setting. The decay nicely covers the time required for instrument changes. There are a few grand pauses also at instrument changes that give the piece a multi-movement feel perhaps more than usual.