1)  One continuous track (no overdubbing) of PEK playing one or many instruments with or without signal processing.

2)  One continuous track of PEK playing one or many instruments with a prerecorded mix of samples drawn from the Evil Clown Catalog or specially recorded at Evil Clown Headquarters.  Solo albums from before this year fall into the categories 1 & 2.

3)  A Quartet of PEKs – Four continuous tracks of one PEK each playing many instruments on each pass.  Two of these albums, Schematic Abstractions for the Clarinet Family and Fixed Intentions for the Saxophone Family use very focused palettes.  Unifications and The Strange Theory of Light and Matter use broad palettes comprised of woodwinds, percussion, electronics, and strings.

4)  An Orchestra of PEKs – Many tracks of PEKs performing on a broad section of the Arsenal.  The last of these, Some Truths are Known, is a mammoth 4-hour studio construction / composition in 3 eighty-minute movements.  I list 110 instruments in the notes for this album….

In the batch of PEK Solo albums from the last few months, 3 fall into Category 1…  The first was for tenor sax alone, the second (a Requiem for my father) was for clarinets, flutes and gongs, and this one is for alto sax alone.  The three albums are:

I just had my alto in the shop for an overhaul…  The horn is a Selmer Balanced Action from the 1950s.  Vintage Selmers are prized instruments for sax players.  I also have tenor and baritone Selmer Mark VI horns from the 1960s.  The alto was in pretty good condition when I bought it roughly 5 years ago, but it was unclear when it received its last major service.  About a month ago, I took it to my horn tech who made some adjustments and tune ups but mentioned that the pads were very dry.  After some discussion, I decided to do the full overhaul and I picked up the horn a few days ago.  As soon as I decided to do the overhaul, I also decided to do the next Category 1 PEK Solo on the alto.

Anthony Braxton created a seminal work for solo alto saxophone in 1969 entitled For Alto.  This work established album length solo improvised performance as a thing, inspiring many others to perform similar improvisations on their instruments.  It’s been a little over 50 years and this approach is now relatively common in free improvisation practice.  I have titled this work For Alto in tribute to Braxton’s revolutionary statement.

Until the stupid virus is over and more normal interactions are possible with other people, I will continue to create PEK Solo new works using the four concepts listed above and maybe some new ones.  There will also be some small group Leap of Faith and Metal Chaos Ensemble sets.  Evil Clown will resume its normal routines when it is safe to do so.

PEK SOLO - For Alto (For Anthony Braxton)(Evil Clown 9258; USA) Featuring PEK on alto sax, tenor & bass ocarinas (potato flutes). In 1968, at the beginning of his long career, Delmark Records released Anthony Braxton’s ‘For Alto’, a two LP set of solo alto sax improvisations. It was a brave move for Mr. Braxton and the Delmark label to do since know one had ever released an album of solo sax music. It was widely disparaged by the press as well as by established musicians like bebop giant, Phil Woods. Many thought it was an indulgent effort, not really jazz of creative music at all. Now, more than a half century later, it shows some bravery and a look at the future of jazz in general or Creative Music more specifically. Multi-reeds player and multi-instrumentalist, PEK, has decided to do a tribute to Mr. Braxton’s early solo effort with his own (mostly) solo alto offering. The only other instruments used are two ocarinas, usually thought of as toy instruments that some of us played as a child.

This disc begins with some solo ocarina with some delay added. Pek soon picks up his sax and starts slowly, playing long notes and bending them slightly, also using some reverb to add some depth to the sound of the lone sax. Pek takes his time and plays slowly at first, concentrating on his note bending abilities as he goes. I am reminded more of the last solo sax concert & CD by Mr. Braxton recorded at the 2017 FIMAV Fest Victoriaville, Quebec. Mr. Braxton also sounded more mature, older and more thoughtful in his playing. Pek’s playing here sounds equally reflective, thoughtful and with less fireworks than usual. Pek lets things build, eventually erupting, bending & twisting those notes to near breaking point. There appears to be a good balance here of the extremes, building to free frenetics and then coming back down to the planet Earth. All of Pek’s previous 100+ discs feature as many instruments as he can play in one session but not this one. This is his lone (mostly) solo alto effort and it is a strong yet modest gem. - Bruce Lee Gallanter, DMG     ​

Every once in a while, there is a break in the crazy schedule here at Evil Clown and I have some time to do a solo album.  Our grand olde pal, the Corona Virus has provided such a break in spades….  At the beginning of the year, it appeared that the year would be our busiest yet…  We did a bunch of albums in January, February and the first weeks of March, and then I was forced to cancel a bunch of wonderful performances scheduled for the months that followed.   So, I caught up all my old business:  web site, social media, distribution, and the other non-musical activity required to drive the enterprise.  Then I took a month off…  my biggest rest since I started up in 2015 after my long hiatus.  In mid-May I started up again, conceiving some new means of producing some of the enormous output normally achieved by Evil Clown.

For obvious reasons, I have been producing a lot more PEK Solo albums than I do in a typical year.  As with larger ensemble Evil Clown sessions, the planning involves selecting sound resources from the massive Evil Clown Arsenal and setting up the studio with these instruments to allow rapid changes in instrumentation and therefore in sonority.

"... PEK’s playing here sounds equally reflective, thoughtful and with less fireworks than usual. PEK lets things build, eventually erupting, bending & twisting those notes to near breaking point. There appears to be a good balance here of the extremes, building to free frenetics and then coming back down to the planet Earth….”

“...Anthony Braxton created a seminal work for solo alto saxophone in 1969 entitled For Alto.  This work established album length solo improvised performance as a thing, inspiring many others to perform similar improvisations on their instruments.  It’s been a little over 50 years and this approach is now relatively common in free improvisation practice.  I have titled this work For Alto in tribute to Braxton’s revolutionary statement..."

In 1969 alto saxophonist Anthony Braxton released an unprecedented solo saxophone album, For Alto, dedicating each piece to a composer or player, including Leroy Jenkins and John Cage; Boston improviser David Peck took this album as inspiration to create his own extended solo improvisation as a tribute to Braxton, performing on a classic Selmer Balanced Action saxophone. 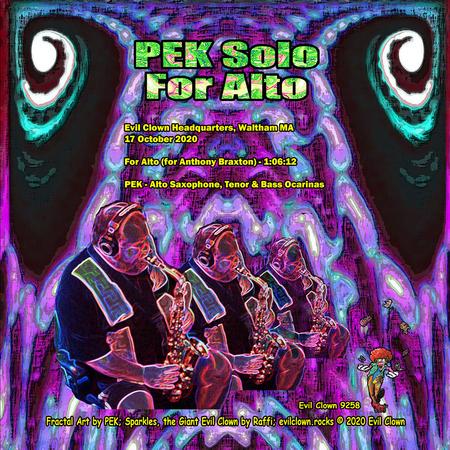 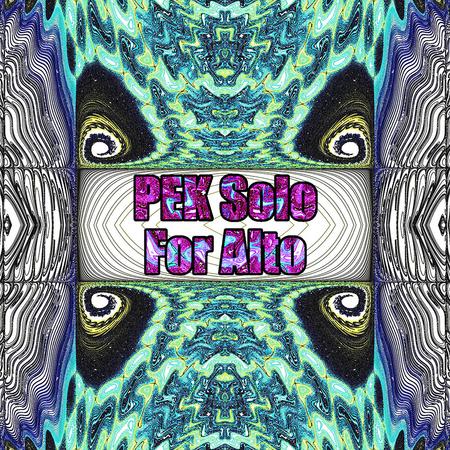