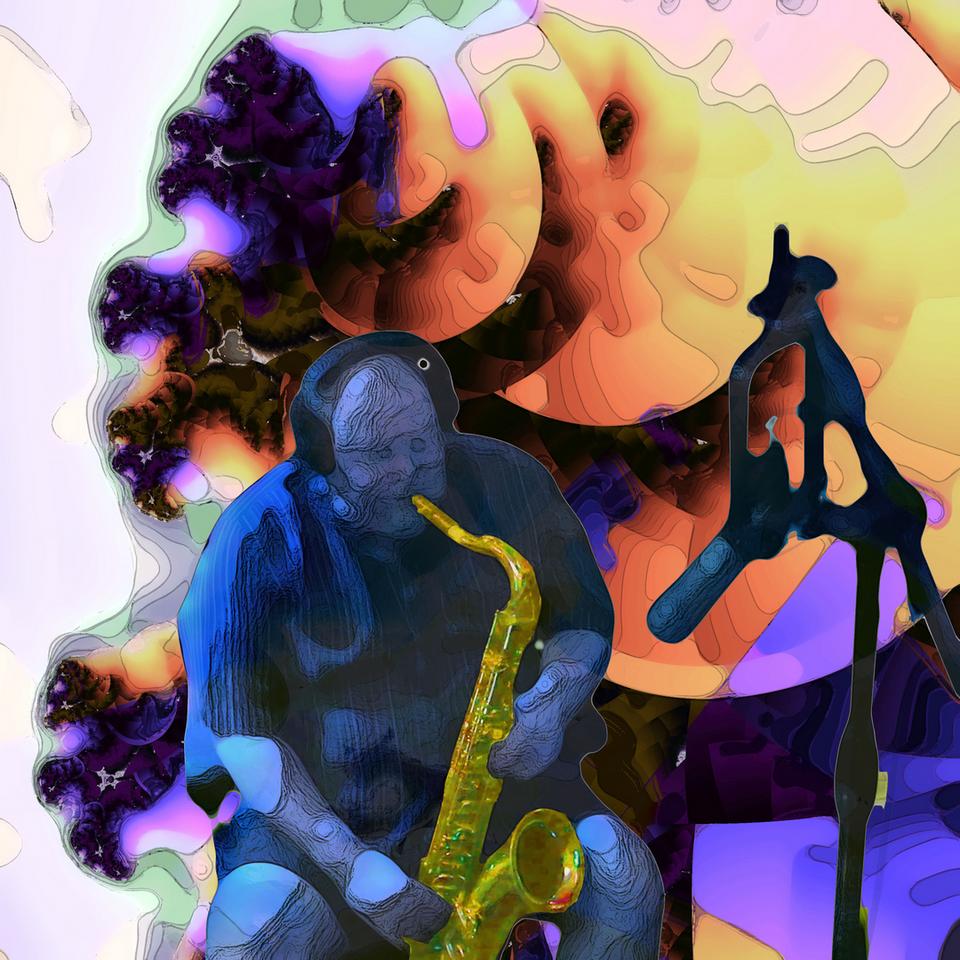 Every once in a while, there is a break in the crazy schedule here at Evil Clown and I have some time to do a solo album. Our grand olde pal, the Corona Virus, has provided such a break in spades…. At the beginning of the year, it appeared that the year would be our busiest yet… We did a bunch of albums in January, February and the first weeks of March, and then I was forced to cancel a bunch of wonderful performances scheduled for the months that followed. So, I caught up all my old business: web site, social media, distribution, and the other non-musical activity required to drive the enterprise. Then I took a month off… my biggest rest since I started up in 2015 after my long hiatus. In mid-May I started up again, conceiving some new means of producing some of the enormous output normally achieved by Evil Clown.

This is the fourth PEK Solo effort of 2020. There probably would be more, except I have been focusing on studio construction of structurally complex works involving many of my instruments, overdubbing and computer sound processing, which take longer than my more usual methods. I am super happy with Some Truths are Known – a four hour composition in 3 eighty minute movements for myself on 110 instruments… and I just finished The Strange Theory of Light & Matter, a much simpler session for 4 PEKs each playing through the entire duration on a bunch of different horns.

I had an open weekend while we wait for some new additions to Yuri’s drum kit before we finish the last pass for Metal Chaos Ensemble – Don Quixote. Rather than start a new complex work, I decided to do a monumental solo for the full duration of the disk on a single instrument: tenor saxophone. A while back, I did a great solo for contralto clarinet and electronic processing… PEK Solo – Non-Local Causality. While not my very first instrument, tenor was my primary horn for a large part of my early history. I started on tenor in high school after playing piano, clarinet and alto from the 3rd grade… I played rock in California on tenor in the 80s and studied tenor with Kurt Heisig in California during the 80s and George Garzone at Berkee in the early 90s. Throughout the 90s I used 6 different horns, and after the 2015 reboot, many more, but tenor was then and remains now at the center of my concept, and this effort demonstrates my current improvisational thinking/language on my strongest instrument.

Until the stupid virus is over and more normal interactions are possible with other people, Evil Clown will continue to create new works using different methods which don’t involve many other players: PEK Solo projects, and a very select number of Leap of Faith or Metal Chaos Ensemble sets involving no more than 3 people. The PEK Solos with fall into 3 categories: Large Studio Construction/Compositions for lots of overdubbing PEKs on many instruments, small ensembles of PEKs like quartets or sextets, and solos like this effort for unaccompanied single instruments (either full length, or several shorter pieces on different horns)…

PEK SOLO - Pursuing the Ideal Limit of Inquiry (Evil Clown 9251, USA) Let’s face facts: Dave PEK’s recorded catalog is fast approaching the brobdingnagian proportions of Sun Ra or Frank Zappa (well not quite, but it’s getting there), and damn are we lucky to have him. He epitomizes the consummate artist: tirelessly performing (at least pre-pandemic), constantly recording, working his artistic mandate with a vigor and sense of purpose necessary to underscore the value of his life’s work, splaying his art out for those of us wishing to be fully engulfed by it. PEK is also a man hugely invested in simply creating sound, and though predominantly a reeds player, he’s more broadly an enthusiastic multi-instrumentalist who will grab whatever noisemaker’s fifes are in reach to externalize his far-reaching ideas. On this outing, he limits himself to his trusty tenor saxophone, adorned and swept into vast clouds of digital delay, a soloist accompanying himself on soaring, spiritual flights of fancy. Obvious comparisons abound —Coltrane’s howling into the wind, Ayler’s spiraling lattices, the strident honks and pockmarked landscapes of Steve Lacy and Evan Parker. PEK’s texture mapping freely acknowledges these influences with relish, but his methodology ultimately translates into something more searching, telling, and haunting. Solo sax recordings, especially those of similar vintage, can be rough going for many (and this one, like other Evil Clown missives, comprises a single hour-long expanse); it takes an artist with enormous facility and keen expressive savvy to hold even the most patient audience’s attention through a single sitting. PEK’s notes and sequences mimic the flow of alternating electrical current, or the endlessly reformatting swells of an immense ocean, where the music’s progressions take us on a deep emotional rollercoaster through the labyrinthine pathways of the artist’s muse and mind. Is PEK stating here that his ideal limit of inquiry is his attempt to dissect us at the psychic level, to probe deep into the spectrotemporal for those elusive mindstates that are only crystallized via sound? If so, he’s succeeded in spades. This is visceral, profound music every bit as vital as its predecessors’ and just as spellbinding. - Darren Bergstein, DMG

"… On this outing, he limits himself to his trusty tenor saxophone, adorned and swept into vast clouds of digital delay, a soloist accompanying himself on soaring, spiritual flights of fancy.  Obvious comparisons abound —Coltrane’s howling into the wind, Ayler’s spiraling lattices, the strident honks and pockmarked landscapes of Steve Lacy and Evan Parker.…  This is visceral, profound music every bit as vital as its predecessors’ and just as spellbinding."
- Darren Bergstein, DMG

"...  Rather than start a new complex work, I decided to do a monumental solo for the full duration of the disk on a single instrument:  tenor saxophone.  ...   Throughout the 90s I used 6 different horns, and after the 2015 reboot, many more, but tenor was then and remains now at the center of my concept, and this effort demonstrates my current improvisational thinking/language on my strongest instrument..."

"The fourth PEK Solo effort of 2020 finds Boston-area reedist David Peck in a virtual duo with himself, using a digital delay in a call and response on a single instrument - the tenor saxophone - his primary horn for a large part of his early history, demonstrating his current improvisational thinking & language on his most familiar instrument"
- Squidco Staff 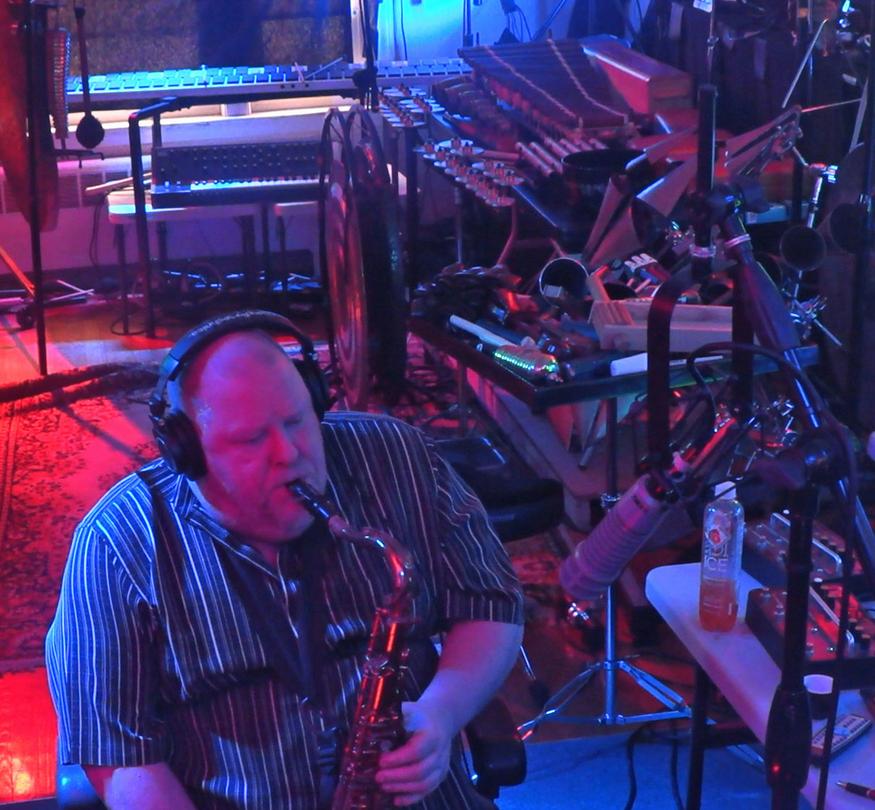 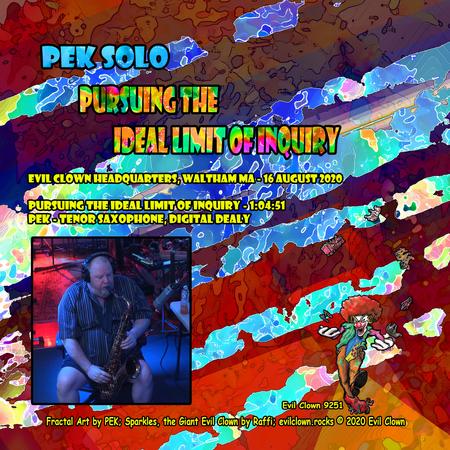 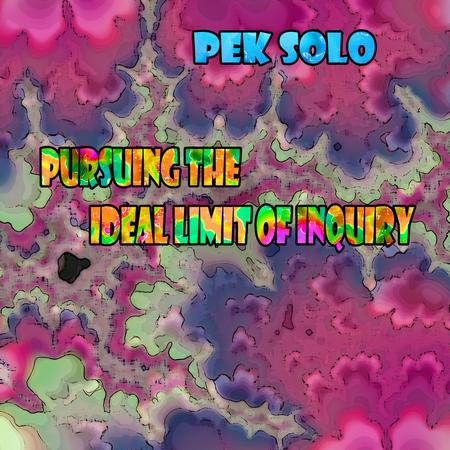