PEK Liner Notes Excerpt...
"I knew right away that I needed to play music as soon as possible to express my grief.  Throughout much of the performance I am weeping at the same time I was playing. A fair amount of this is audible in the recording. Although I am still very sad, I felt much better afterwards...."

"…The air is filled with mystery and suspense, the contrabass clarinet bathed in echoplex, sounding closer to a monster from your fave Japanese science fiction film…  Eventually PEK picks up his clarinet and starts to bend his notes inside out, further and further out, making us all feel disoriented, the way our current situation has made us feel day in and day out…”

"A heart-felt and yearning solo work by Boston multi-instrumentalist and improviser David Peck performed as a requiem for the passing of his father, Raymond Sheldon Peck, in September of 2020, recorded a few hours after receiving the news, in an emotional work with heavy-hearted percussion behind grief-struck clarinet, contrabass clarinet, and flutes."

A Sister's Tribute from my aunt Kathy...

Ray was five years old when I was born and I was told he really wanted a sister. Ever the builder/teacher, the family movies show Ray running the model train and explaining the erecter set, Lincoln logs or steam engine “builds” to me.

I was the only girl in a neighborhood of five-year-older boys, but I was never excluded.  When the neighborhood boys built a tent city in the back yard (carpet underfoot and electricity included), Ray’s sister got to sleep out in the tent too. When Ray and the neighborhood boys envisioned a carnival, my job was penciled in---the cigarette girl, complete with cardboard box on a neck string, candy cigarettes and cigars.  There was a movie theatre, featuring Disney’s Steamboat Willy run by Ray on the family projector. I sold the popcorn. There was a snake charmer, and a freak show, etc., a sights previously unseen in Twin Falls, Idaho.

By Junior High and High School, Ray was into photography and I “took pictures” with him at the basketball games.  (“Yell for the ones in Blue and White.”) Then he built a darkroom in the basement.  My Mother must have been delighted to have an entire day with both of us locked in the darkroom, developing pictures, because it could ruin the paper if you went in and out.

When Ray went to MIT, my Father devised a unique payment plan for our college educations. Dad was a building contractor and office stuff was never his favorite. As a 7th grader, I did the payroll, some times for 45 carpenter/laborers, figuring withholding, entering the hours and where job costs should be billed and writing the checks for Dad to sign. My payment, limited by what he could pay me before I had to pay income tax, went into an account that helped pay Ray’s college expenses. When Ray was fully employed, he was to repay the amount into my college expenses, as he later did.

When he came back in the first summer, I decided he needed to be tested.  I short sheeted his bed. Nothing, no reaction, no dirty tricks occurred, until sitting on my bed there was a squeaky sound. I quickly found he had wired the telegraph toy to the bedsprings. Not a bad retaliation, until I washed my face in the bathroom and my feet got wet.  He had removed the crookneck on the sink drain!

Once we both had families/children, Ray loved to organize the Christmas Gift shopping as we drew names for family member gifts. Armed with his spreadsheet designating buyers/receivers and likely stores, we hit the mall. With 12 family members, those being shopped for were directed to where they should go to buy their gift, so they couldn’t see what was purchased for them. Spreadsheets were important. When Ray and I traveled to Oklahoma to check on the family farm, the spreadsheet played a major part. I was in charge of plane tickets, motel room, renting/driving the car and timing the trip on the map. Ray was in charge of the meets with attorney, assessor and the state gas and oil contact, timed to the half hour.  We spent more time debating the gas and oil contracts than we earned in profit, but we thought alike and edited each other’s thinking, without argument.

He didn’t tell me what to do, didn’t give advice, but could pull up the research “button” to broaden my thinking. It was fun to be his sister and I will miss him and the time that was.

​Obituary from my Mother on

Ray was born in Twin Falls, Idaho., to Dorcas and Earl Peck.  He was husband tp Angela, father to David, Steven (Kristen) and Karen (Josh) and grandfather to Andrew, Isaac and James,  He earned degrees in structural engineering at MIT and UCBerkeley  He served a two-year stint in the U.S Army in Korea after the war.  Seeing that computers were going to be very important to engineering he joined IBM for a 33-year career.  Ray  was a supportive and nurturing husband and father…attending, leading, coaching…Boy Scouts, YMCA, sports, concerts, camping activities.  He was an enthusiastic volunteer at The Computer History Museum in Mountain View and Foothills Congregational Church in Los Altos.  We miss him terribly. 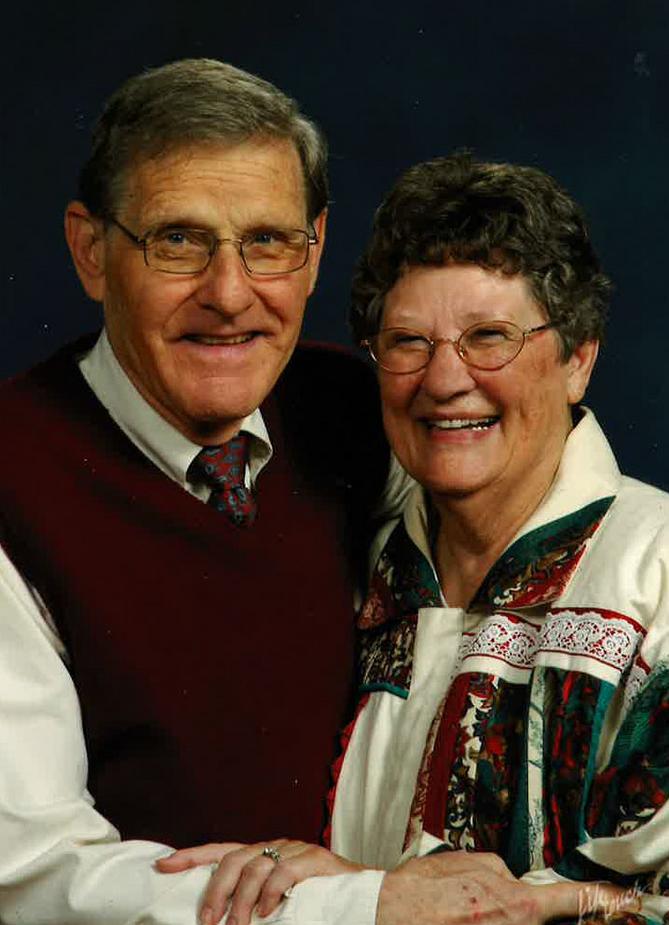 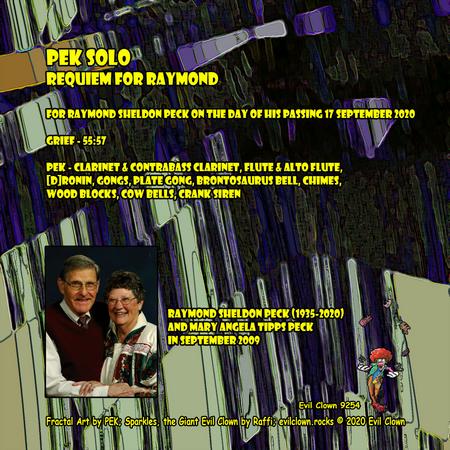 PEK SOLO - Requiem for Raymond (Evil Clown 9254; USA) Featuring Dave PEK on clarinets, flutes, dronin, gongs, bells, chimes & siren. This disc is dedicated to Raymond Sheldon Peck, Dave Peck’s father who passed away in September of this year (2020). I know that when my own father passed in 1980 at the age of only 54, I was devastated. He died way too young and was a wonderful father and all-around great person. He influenced in many good ways, especially to be honest and stand tall for what I believe. No doubt that Pek’s father was an inspiration to him as well. Of all of the many (dozen plus) solo efforts from Leap of Faith founder Dave Peck, for this session PEK plays just 12 instruments instead of the usual 20-30 oddities that he usually draws on. The name of the piece here is called, “Grief”. The one thing I noticed about the recent batch of solo efforts by PEK is that they are consistently focused, all sounds well chosen, selectively placed, often one note or sounds at a time, slowly building by adding one layer at a time with some overdubbing device. Pek starts with a singular pounding of a gong which reverberates slowly. Soon switching to contrabass clarinet and cautiously bending and weaving his notes in a most hypnotic way. The air is filled with mystery and suspense, the contrabass clarinet bathed in echoplex, sounding closer to a monster from your fave Japanese science fiction film. PEK often uses selective amounts of reverb to add some eeriness to his reeds or percussion arsenal. Eventually PEK picks up his clarinet and starts to bend his notes inside out, further and further out, making us all feel disoriented, the way our current situation has made us feel day in and day out. The overall vibe here is one of the balance between the strength of music to inspire us with the loneliness of having to stay in solitude inside our homes either by ourselves or with some of our loved ones. Dark yet hopeful. - Bruce Lee Gallanter, DMG 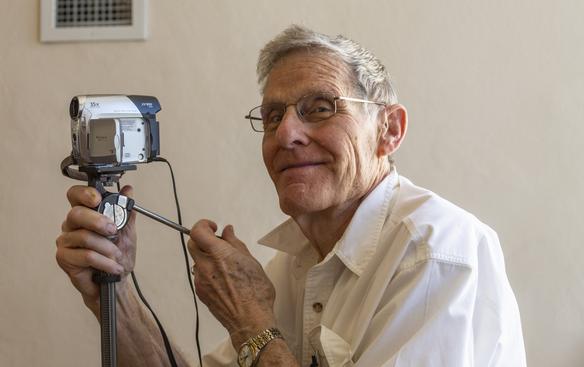 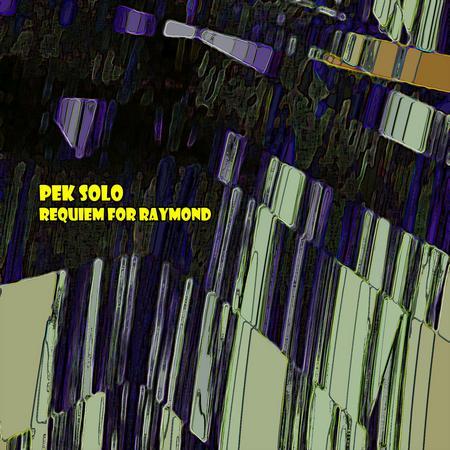 I have been very sad since the news arrived a few days ago of my father’s passing. He has had a hard time the last few years, falling several times and sustaining injuries exacerbating his other health issues. He passed suddenly and quickly at home in the company of my mother and my brother after a long and productive life.

I recorded Requiem for Raymond several hours after hearing the news. I am not usually a musician who drives my music with emotion, I describe my approach as cerebral. However, over many years I have noticed that in my infrequent moments of highly charged emotion something fundamentally different comes about in my playing…

I knew right away that I needed to play music as soon as possible to express my grief. Throughout much of the performance I am weeping at the same time I was playing. A fair amount of this is audible in the recording. Although I am still very sad, I felt much better afterwards.

This recording is by far the most profoundly intimate and personal expression I have ever created.

I miss him terribly.