For obvious reasons, I have been producing a lot more PEK Solo albums than I do in a typical year. As with larger ensemble Evil Clown sessions, the planning involves selecting sound resources from the massive Evil Clown Arsenal and setting up the studio with these instruments to allow rapid changes in instrumentation and therefore in sonority.

The PEK Solo albums fall into four categories:
1) One continuous track (no overdubbing) of PEK playing one or many instruments with or without signal processing.
2) One continuous track of PEK playing one or many instruments with a prerecorded mix of samples drawn from the Evil Clown Catalog or specially recorded at Evil Clown Headquarters. Solo albums from before this year fall into the categories 1 & 2.
3) A Quartet of PEKs – Four continuous tracks of one PEK each playing many instruments on each pass. Two of these albums, Schematic Abstractions for the Clarinet Family and Fixed Intentions for the Saxophone Family use very focused palettes. Unifications and The Strange Theory of Light and Matter use broad palettes comprised of woodwinds, percussion, electronics, and strings.
4) An Orchestra of PEKs – Many tracks of PEKs performing on a broad section of the Arsenal. The last of these, Some Truths are Known, is a mammoth 4-hour studio construction / composition in 3 eighty-minute movements. I list 110 instruments in the notes for this album….

"… First, we hear soft, suspense-filled gongs with subtle electronics, the looping of certain electronic sounds with one or two reed instruments floating in... Oddly enough, this sounds like an organic, electronic score which unfolds in a natural way with short solos or instrumental breaks well woven into the hypnotic tapestry... Hard to believe that this is just a solo effort but it is and it is consistently engaging, well-balanced, thoughtfully paced and well-executed. Another outstanding effort from the ever-expanding Evil Clown catalogue.” 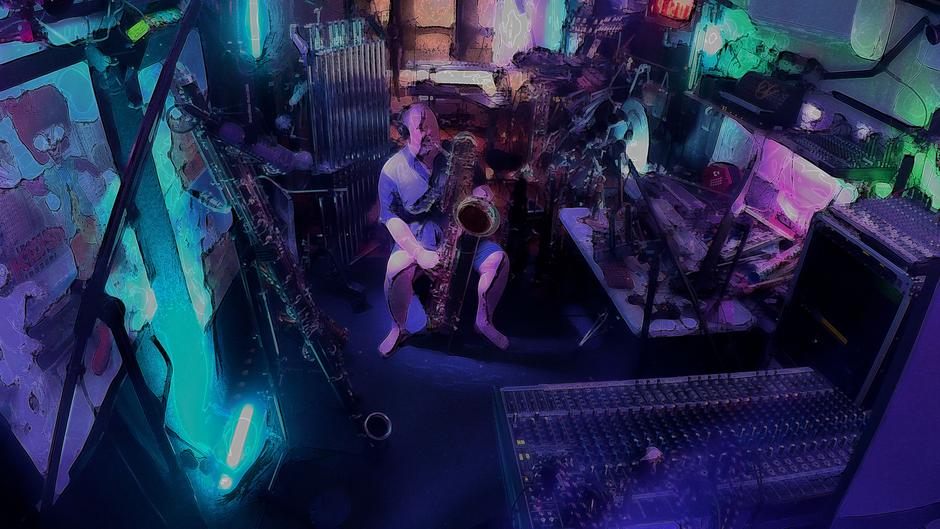 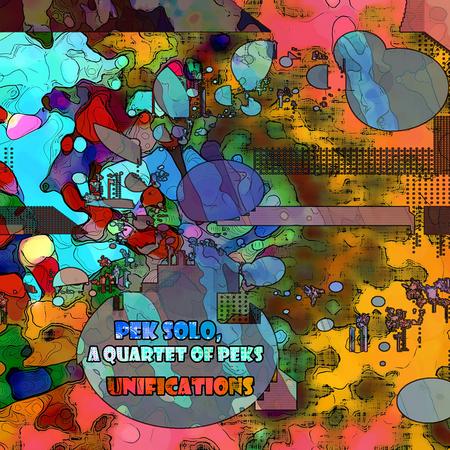 PEK SOLO - A Quartet of PEKS - Unifications (Evil Clown 9255; USA) Featuring PEK on clarinets, saxes, flutes, double reeds, guzheng, melodica, synths, tons of percussives, etc. As the pandemic/lock-down rages on, more folks are trying to keep safe, busy and healthy in their own homes. Leader of Leap of Faith and various Evil Clown offshoot units, Dave PEK, has done a number of solo sessions at his own Evil Clown Headquarters over the past few months and now has a half dozen solo CD’s out. This is the third one I’ve reviewed in the past month. PEK has quite a collection (45+) instruments here, some common ones and a few rare ones (daxophone, guzheng & Englephone). I like the way PEK has mastered the art of recording by selectively adding layers with occasional effect the live overdubbing and mixing. Hard to believe there is only one person doing everything we hear. First, we hear soft, suspense-filled gongs with subtle electronics, the looping of certain electronic sounds with one or two reed instruments floating in. PEK usually solos on one instrument at a time: bass sax, a double reed, flutes and other reeds or percussion adding another layer of eerie electronics and effects. Oddly enough, this sounds like an organic, electronic score which unfolds in a natural way with short solos or instrumental breaks well woven into the hypnotic tapestry. This sounds like a more restrained version of some tasty, spacey krautrock with Embryo-like ethnic spice. Hard to believe that this is just a solo effort but it is and it is consistently engaging, well-balanced, thoughtfully paced and well-executed. Another outstanding effort from the ever-expanding Evil Clown catalogue. - Bruce Lee Gallanter, DMG

I like this Quartet of PEKs format. On the first track I play 60% to 70% of the album’s duration leaving a silence of several minutes at each instrument change. In many ways, the first track dictates the overall form of the work. The next three tracks each fill in some of that space and play counterpoint to the previously recorded tracks. This is a bit like playing in an ensemble where you are reacting to the other material in real time with a couple of significant differences. The interaction is one-way, since the prerecorded material is already fixed (apart from the relative volumes controlled in the final mix). The waveforms of the previous tracks are visible in the computer DAW program. For an improvisor whose principle technical method relies on phrasing, the waveform reveals a great deal of information helpful to the decisions executed in each subsequent track. 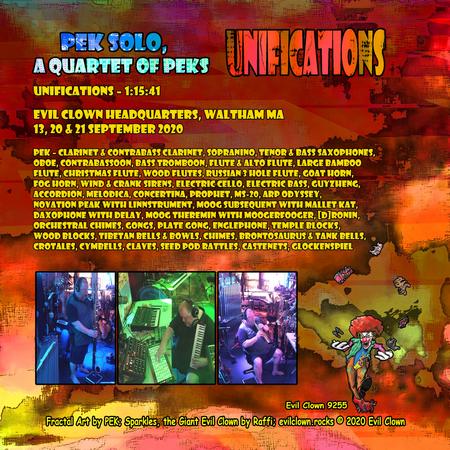