A beautiful gong begins the proceedings of Possible Universes creating the right mood for the improvisations. A solo violinist is playing away like mad, while rumbles from small percussion instruments: bells, wood blocks, and more, pepper the floor, making it difficult to get through this impassable field. This recording uses the full Leap of Faith Orchestra (LOFO). It has a multitude of musicians participating on this recording. This live performance was done on May 28, 2017, at the Somerville Armory. One day, I must get up to Cambridge and see this version of the LOFO in person or catch them live if they come to New York City. The full orchestra launches into a series of musical legato slurs that overtake the orchestra like a mutating virus, infecting bodily systems and internal organs along the way. This has the effect of producing screaming roars from the horns and other sections in the orchestra. I find myself thinking of the classical composer, Charles Ives.

With so much passion being displayed, I wonder how the audience must be reacting to hearing this body of polyphonics. This is the freest I’ve heard this orchestra. The music is very wild, off key, and feels like it’s operating more on pulse than traditional tempos. The feeling is very free from six minutes on, until, the gong reenters and shuts down this group improvisation; not permanently, but for this new section. The music ranges from low basses to piano explorations at the moment. The gong ends this section of loud dynamics. I thought this was over, but more loud sounds return briefly before entering a section of unintelligible vocals from the members of the orchestra. It sounds like they’re humming randomly. I once saw Frank Zappa and the Mothers of Invention do this at a show when they performed in Boston. The audience, however did not appreciate it and they began to leave the venue en mass!

The next portion of this composition, features crescendos, from horns, saxophones, and low rumblings from the bass section. I’m hearing the tuba also joining in the fray. Some of the sections are playing atonal lines, while others are improvising in between staccato lines. The driving drum rhythms from the percussion section is pushing the orchestra to another strata; a new plateau for more explorations. David Peck really knows how to utilize his musicians.  One has to have a vision for having such a large orchestra. Some of what’s being played tears a page from traditional classical music while the rest of the material is highly experimental in nature. One of the guitar players is establishing melodic lines while the rest of the orchestra is trying to maintain its sanity. A lot of moving parts are in motion which makes the music fertile ground for even more new ideas. The tuba joins the bass section as they contribute melancholic lines that support the mayhem on top. This is the root and foundation for the orchestra, allowing it to continue to move and explore new vistas at will.

At the nineteen minute mark, the orchestra gradually starts to build tension which reaches a peak for everyone at the 22 minute mark. The in and out lines, continue to lead the orchestra, higher and higher. There is so much passion being displayed, this is something I haven’t heard from them in previous recordings.

A solo horn generates another melancholic line which signals the gong strike. The marimba takes precedence during this section followed by several more gong strikes. The gongs are useful as a section indicator and for generating tension within this musical coda. It continues to vibrate, until the sound fades into nothingness. This leads to a percussionist playing one of  my favorite instrument, the chimes. The bell-like quality of this instrument, evokes images of the church. The music seems like a track from an old science fiction movie from the fifties. With wavering notes from the vibes, the tones lingers at length. The timpani follows, bringing a war-like cry in the midst of peaceful surroundings. These sounds are very aggressive. A guitar player decides to solo over this layer of polyphonics. The rising tension is off the scale as the orchestra launches into orbit. The tension builds and builds until the gong once again signals a new section. This time, the upright bass players take their solos, all of them together.

I can hear someone talking about the music, however, the conversation is very brief. We are at the 30 minute mark. The drummer on the drum-kit enters the fray and begins free jazz drumming. Suddenly everyone leaving just the drummer and one trumpet player. I’m hearing drumming ideas I use, playing rim shots on the toms which enters African drumming mode. The piano joins this interlude along with the timpani. Underneath, the timpanist, uses a high note on the timpani while varying the pitch of the sound via the pedal. Gradually, the rest of the orchestra joins in. I would say about half the orchestra is improvising within this section. As we near the forty minute mark, the trumpet and horns are soloing. The gong signals the next part. I can hear the drummer playing alone, and within moments, the rest of the orchestra joins him.

While much can be said about this recording, it’s been a while since I’ve heard an ensemble of this size, with so many players, that were in the zone: the magical zone, where a musician or artist can do no wrong.  I’ve only seen the smaller version of the Leap of Orchestra, but what’s on this CD is pure TNT – nitroglycerin! On this night, the orchestra is playing as one, generating wave after wave of highly energetic polyphonics. It’s so organized even when it’s disorganized within the parameters set by the leader, David Peck. This is the most formidable output I’ve heard from this unit. It is truly remarkable to hear how the musicians are in sync with each other.  Do pick up your copy of Possible Universespronto at the nearest record store, or order it online. If you haven’t heard any of the previous CDs by the Leap of Orchestra, I highly recommend this recording, as a place to start! 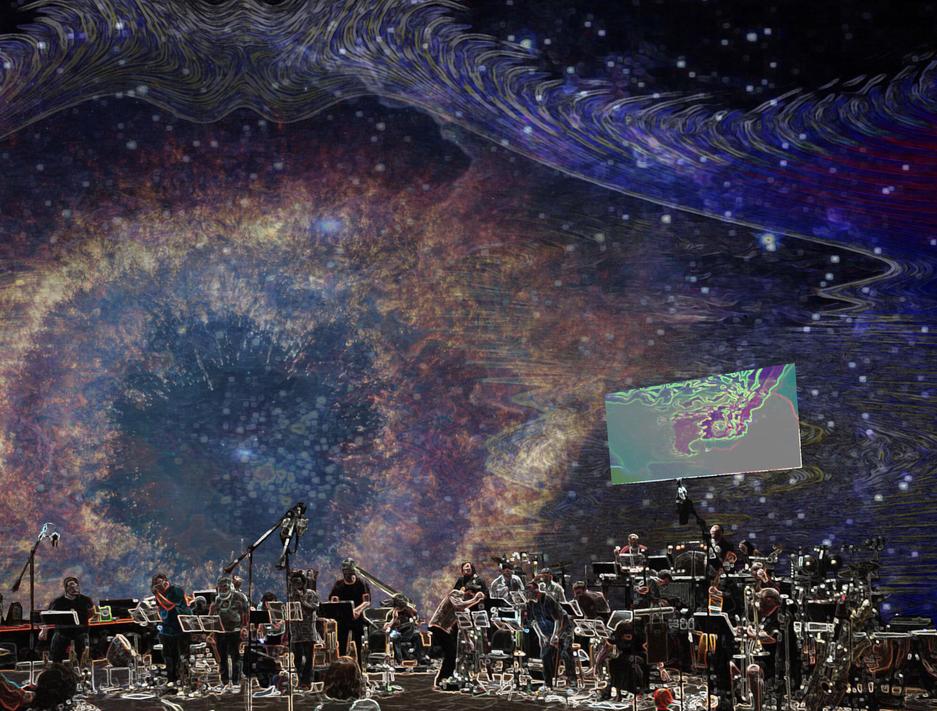 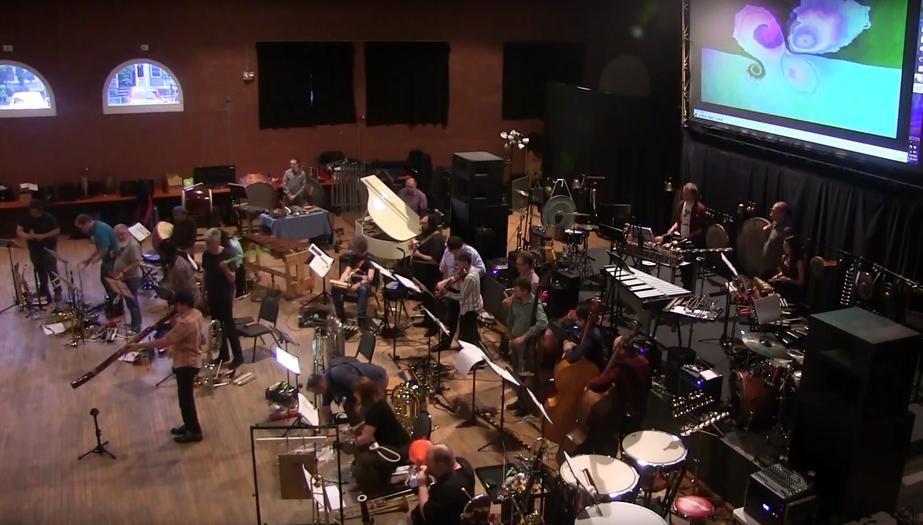 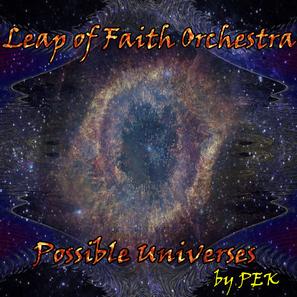 Possible Universes is the latest release from the multi-faceted Leap of Faith collective. In the orchestra formation, the group has released some half-dozen recordings but the "full" orchestra is a biannual occurrence where the normally fifteen-piece ensemble grows. On this album, the collaborative expands to twenty-four musicians and, as always, the long-time anchors are composer and reed player PEK (David Peck) and cellist Glynis Lomon.

As is often the circumstance in Leap of Faith Orchestra recordings, the album consists of one very long (almost eighty minutes) title track. The highly capable improvisers engaged by PEK are participating in the composer's unique method of Frame Notation where (as he describes in the liner notes) ..,"written English descriptions of the overall sonority desired and simple graphic symbols are given durations for each player on their part along with direction on when to play and when not to play." The notation looks more like playoff brackets but within are the only directions that the composer chooses to offer—the mechanics of "who" and "when." What is not within the brackets are melodic or rhythmic data, placing Possible Universes in an often frenzied situation as the improvisations develop within controlled blocks of time and space.

Along with strings and three basses, a large assortment of percussion instruments, and two tubas, the orchestra utilizes an assortment of non-conventional devices such as bullroarers, claves, flex-a-tones, slide whistles, wind sirens, crank sirens, bells, Tibetan bowls, ratchets and a tube-o-phone. Even in the midst of scores of instruments, the piece utilizes silence as a much-needed balance. The Leap of Faith catalog has grown at a rapid pace in recent years; remarkable in that the collective and the enormous orchestra stay largely intact through these always complex works. Possible Universes works in a surprisingly paradoxical way, allowing structure and freedom to coexist, while constantly challenging the ear. It's not quite like anything else.

It seemed hard to believe at first, but Dave PEK, leader of Leap of Faith, has continued to expand his long running ensemble by adding personnel and keeping his various ensembles playing live in & around Boston (and occasionally in New York), as well as recording them in his home/studio. Word is that PEK’s Evil Clown label has passed the point of 100 releases, many in the past few years.

The Leap of Faith Orchestra has played their first few gigs in the past year and this disc captured one on May 28th of this year (2017). There are some 24 musicians involved including a few longtime cohorts like Eric Zinman (piano), Jonathan LaMaster (violin) and Syd Smart (drums). What is even more impressive is that Mr. PEK has learned how to organize/lead this massive ensemble so that it doesn’t sound consistently like chaos. The core members of Leap of Faith, PEK on multi-reeds, Glynis Lomon on cello and Yuri Zbitnov on drums are often at the center with various layers of strings, reeds, brass, guitars, basses and percussion surrounding them. It is hard to believe that there are so many musicians involved since certain sections are stripped down to silence of spaciousness. Unlike some of the other more out-there excursions by Leap of Faith, this one is more balanced and unfolds in a most organic and magical way. Everyone takes their time and sounds completely focused. I know that Mr. PEK has been employing a timer or clock to help keeps things more balanced and the results are indeed phenomenal. This could be the best Leap of Faith release so far, which is pretty amazing considering that I’ve reviewed some two dozen plus discs so far. - Bruce Lee Gallanter, Downtown Music Gallery