USA) This is an expanded version of the Leap of Faith collective with some 21 members and it was recorded just last month (in November of 2016).  Considering that creative gig opportunities are relatively scarce in the Boston area, Leap of Faith founder, Dave Peck, has tapped into a large underground network of musicians, many of whom I’ve never heard of, and gotten them to play in different versions of Leap of Faith and their offshoot units. 21 musicians is quite a large ensemble and one would think that this disc/set would be mostly chaotic but that is not the case. Mr. Peck is using some sort of timing and/or conducting device which seems to keep the unwieldy ensemble focused. I recognize the three core menbers of Leap of Faith (PEK, Lomon & Zbitnov) as well as a few of the more occasional players: trumpeter, Forbes Graham, vibist Andria Nicodemou and drummer Syd Smart. Commencing with gong blast and we are off and soaring.

Everyone in this massive ensemble doubles on varied percussion like metals, rachets and flex-a-tones. You can see the large set-up on the back of this disc. The first part features an extraordinary percussion section for tympani’s, cymbals and other layers of small percussion. This long work (77 minutes) sounds like it is sectional, with various subgroups emerging and with occasional solos rising above the waves. If I didn’t know better, I would think that this was a Braxton or Globe Unity Orchestra piece, this is how strong and well-balanced it is. Longtime Leap of Faith mainstay, Glynis Lomon pulls off an exceptional cello solo with various other musicians interacting around her in short bursts. What blows my mind is when a certain section, like the brass (tubas, trombone & trumpets) all weave their lines together into an impressive display of different currents creating a fascinating tapestry. This happens time and again as different sections or subgroups emerge and expand. As a longtime fan of large ensembles and orchestras, this is one of the more successful orchestral units I’ve heard in a long while! Long live Leap of Faith and their ever-growing network. - Bruce Lee Gallanter, DMG 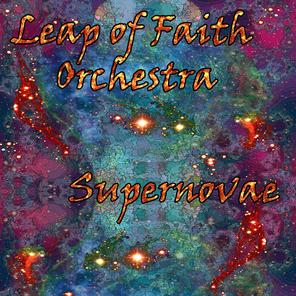 “Composer and instrumentalist PEK (David Peck) has created a big band experience decidedly different from nearly any other. Not for PEK are standard charts with themes and room for soloists; instead an extended (some 77 minutes) ‘composition’ for orchestra is replete with various and sundry unusual instruments and delineated sections in which a variety of colors and textures take center stage, leaving a listener with the distinct feeling of experiencing something of note. The composer employs what he describes as Frame Notation, where the score is seen by players in written  descriptions and symbols within duration bars. The musicians thus derive an understanding of their
individual parts and, more importantly, an expansive sense of the shape of the entire piece. In performance, the players track the time on a sports clock but get no melodic, harmonic or rhythmic information (the reader/listener is advised to go to evilclown.rocks/lofo-supernovae-score.html).

So while what we have, sonically and by description as well, seems to have no shape, the actual music upon closer and repeated listening, takes on its own sense of direction. The non-traditional and
unusual instruments—fog horns, rachets, crotales, bowls, flex-a-tones, crank siren, et al.—govern the first ten minutes of the work at which point strings, reeds and brass begin to emerge. There are moments of quieter, more isolated 'noise'—the lonely bleat of a brass instrument, smear from a guitar or violin, tinkle or roar of a percussion instrument and, at about 45 minutes in, a dark melody with free improvisation blanketing it is introduced. There’s a dazzling and explosive percussion display that leads to the kind of music that opened the performance, this time rich with everything that has come before it. If these descriptions seem vague and non-defined, be assured that as a full musical experience, there are wonders to be discovered. 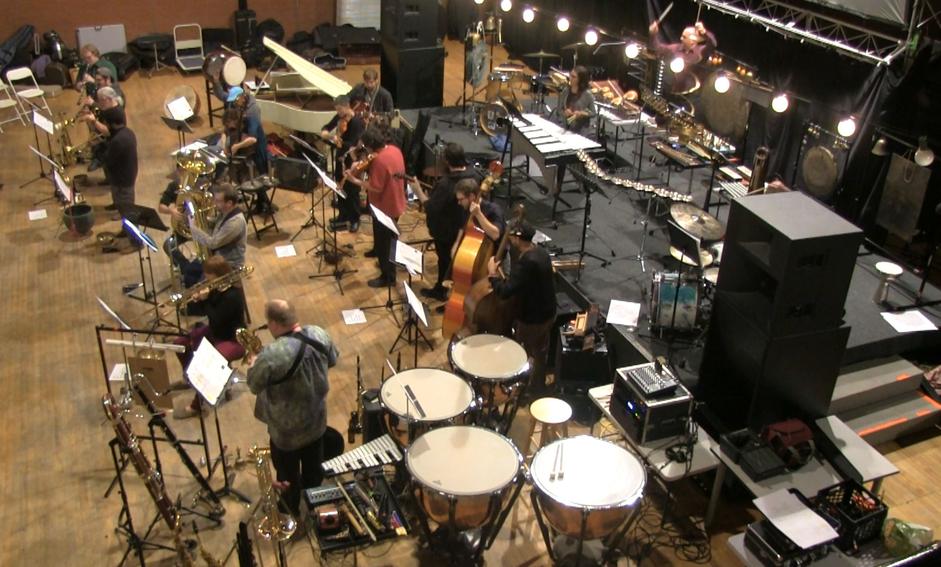 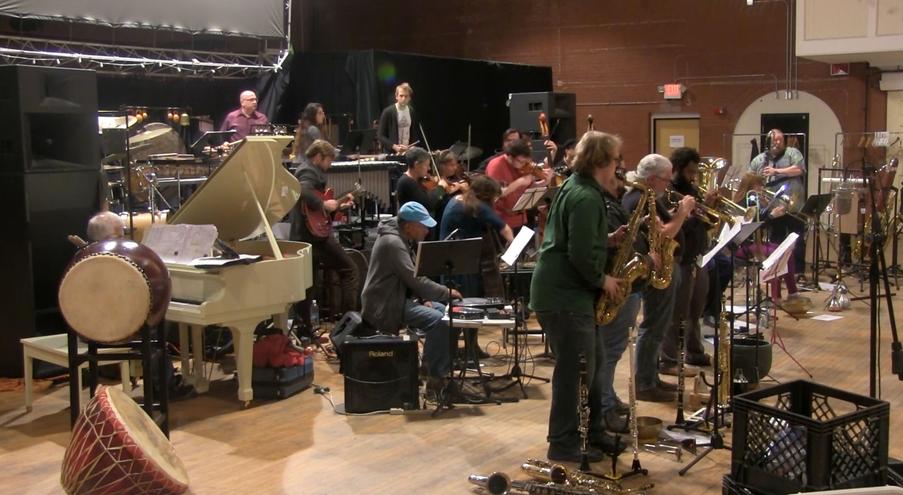 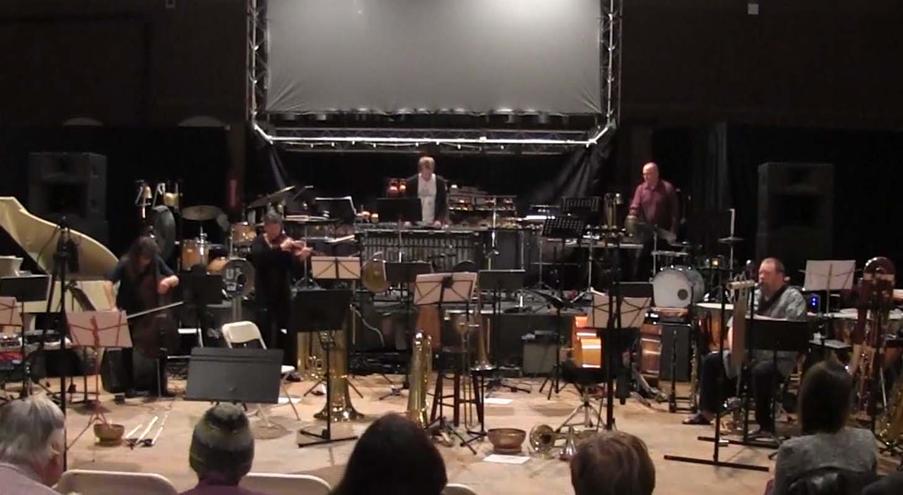 “The full orchestra (with all 5 sub-units) had its first performance on June 4, where we played my composition, The Expanding Universe. The composition does not specify notated melodic or rhythmic information, just durations (by time indices) and English language descriptions of the overall sonority desired. This allows me to plan very detailed compositional events without the need for extended rehearsal. To prepare for this concert we did lots of sessions and performances with each of the sub-units and with each of the other sub-units combined with core Leap of Faith.” — Dave Peck “PEK”

Leap of Faith Orchestra is one of the most ambitious projects within avant-garde jazz approaching work such as that of Marshall Allen and the Sun Ra Arkestra in range and scope. As the track begins, everyone is playing freely. The bass lines are well thought out and executed by Brendan Higgens and Tony Leva reminiscent of Frantz Loriot’s Systematic Distortion Orchestra. Gradually as this supernova develops, more instrumentalists join the fray, heating things up considerably. During this somewhat quiet interlude, from out of nowhere, the percussion section makes its presence known with loud timpani drums in the background. The drums are joined by the horn players, mostly clarinets, trombones, and tubas. There is so much movement happening, the music can only be consumed as a whole, rather than focusing on subsections or individuals. This section gives rise to a space for the piano to shine. Peter Cassino is joined shortly by one of the musicians on saxophone and guitar.

Further along, the orchestra appears to be playing melodic lines while others solo at length. The music is always moving forward via the many sections in the orchestra. Sometimes, it is the trumpets, while at other times, it is the saxophones leading the action. The music drifts along producing melodious sounds from the entire unit. This may vary as the percussion section does unorthodox rhythms. The music is both free and very structured simultaneously. This piece is less about melody, but meant to be heard, as an experience. This music will take listeners to different places; a mental journey of the imagination, as the music opens the door to other dimensions.

The use of the timpani is quite effective with the piano moving in and out, supporting the horn player’s solo. I can hear Forbes taking off, leading the orchestra. His trumpet flurries are a welcome addition to the mayhem. They produce a definitive contrast to the proceedings on deck. The music becomes very surreal as the music moves into a parallel universe. This section reminds me of Cecil Taylor’s large ensemble when he did his performance at Carnegie Hall in 1974. Once this part comes to an end, the violins are left playing by themselves. They are joined by the sound of a gong and the timpani. The timpani player immediately starts bending the notes as he strikes each timpani, letting the elongated sounds linger throughout the room.

As this composition progresses, it would have been perfect for use on The Twilight Zone. It has the mysterious quality that Rod Sterling and his staff of writers, featured in many of the episodes. This would fit right in with the somber pace, the show projected into the living rooms of audiences, every Friday night. If you’re not familiar with the works of David Peck’s Leap of Faith Orchestra, do check out this album. It’s a good place to start. Supernovae is available on bandcamp.

When you invite 21 musicians onto a stage, with probably two to three times the number of instruments between them, you better have a plan! Boston-based musician and band leader David Peck (aka PEK) certainly does.

PEK's reinvigorated Leap of Faith quartet came out of hiatus a few years ago and since they have been busy creating music - and in the case of the orchestra - expanding rapidly. In addition, several  Leap of Faith offshoot projects have also formed, and when the time it right, they come together as the orchestra. For a bit of background, Leap of Faith's Bandcamp site is a rich archive, where many of the Leap of Faith quartet, orchestra, and side-project gigs are meticulously recorded, packaged, and made available for a very reasonable price.

Now back to the plan. The large ensemble does not follow a traditional score, rather what PEK has developed is a scripted sequence of events, where he has blocked out the passages and envisioned collaborations, but relies on the individual musician's improvisational prowess to fill in the details. The secret weapon here is time, as the script's movements are synced with a large digital timer that dictates the shifts. With PEK's direction and the clock's ruthless advance, the music is made (dig in a little deeper and check out a sample of the notation). When the orchestra convened this past November at The Somerville Armory in Somerville, Massachusetts, and embarked on bringing PEK's score to life, they created some highly engaging and unique music, generating layers upon layers of sound and texture. The overall feeling is organic and vital, balancing space and density.

It's best to describe this music as an experience, as there is little to suggest what will happen next, and no repeated melodies or extended themes, rather it's a sequence of improvised events that culminate into a greater whole. An earlier orchestra recording reviewed here possessed a certain dark and turbulent nature to the music, however, Supernovae, while still packing a punch, exudes a more subdued approach - at least for the first 49 minutes. Then, the storm arrives, and the instruments begin to howl, voices rise from the orchestra, and turbulence builds.

Each visit with the Leap of Faith folks reveals new ideas and revised approaches. Supernovae strikes me as a milestone in PEK's vision and his group's cohesion - less aggressive, more nuanced and spacious. A neat addition to an expanding musical universe.