For this set, Glynis and I are joined by one of our favorite violinists, Elinor Speirs, and pianist Eric Zinman from Glynis’ other trio New Language Collaborative (NLC). Elinor first did a Leap of Faith session last summer just before joining the LOFO performance of Cosmological Horizons at Killian Hall MIT in July of 2018. She has finished her DMA at New England Conservatory and now splits her time between New York and Boston. Despite her crazy travel schedule, she has managed to make time for more Leap of Faith sets recorded at Evil Clown Headquarters and now this String Theory performance at Outpost 186.

Eric, Glynis and I all go way back, since Eric was on the Boston Free Music scene when I arrived in 1989, and we played back then. During the long Leap of Faith hiatus, Eric played a great deal with Glynis and the brilliant drummer Syd Smart in NLC. In more recent times. Eric has been the regular pianist for the Leap of Faith Orchestra and a frequent guest in smaller Leap of Faith ensembles, Metal Chaos Ensemble, and String Theory.

This performance is a very interesting development in this history, combining long prior history with Eric and recent small format Leap of Faith performances with Elinor. One of the main characteristics of String Theory compared to Leap of Faith is the absence of a drummer. We love Yuri’s playing and there are many wonderful performances by LOF with additional strings, but occasionally we do the strings without drum set. String Theory, as a result, has a much more chamber music vibe than Evil Clown albums by the other bands. Although Yuri is absent, there is still percussion, just no drum set; I brought some gongs and a couple bags of wood and metal instruments and Eric included several cymbals in his piano set up, and also played the piano interior with mallets… 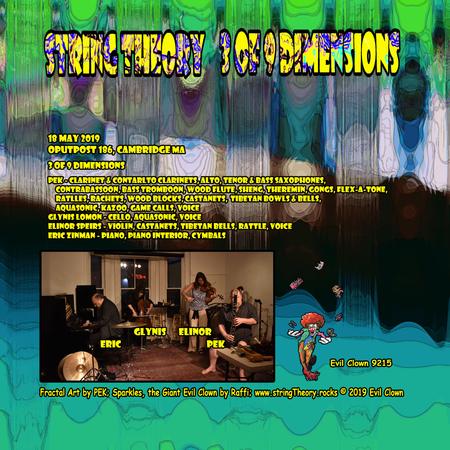 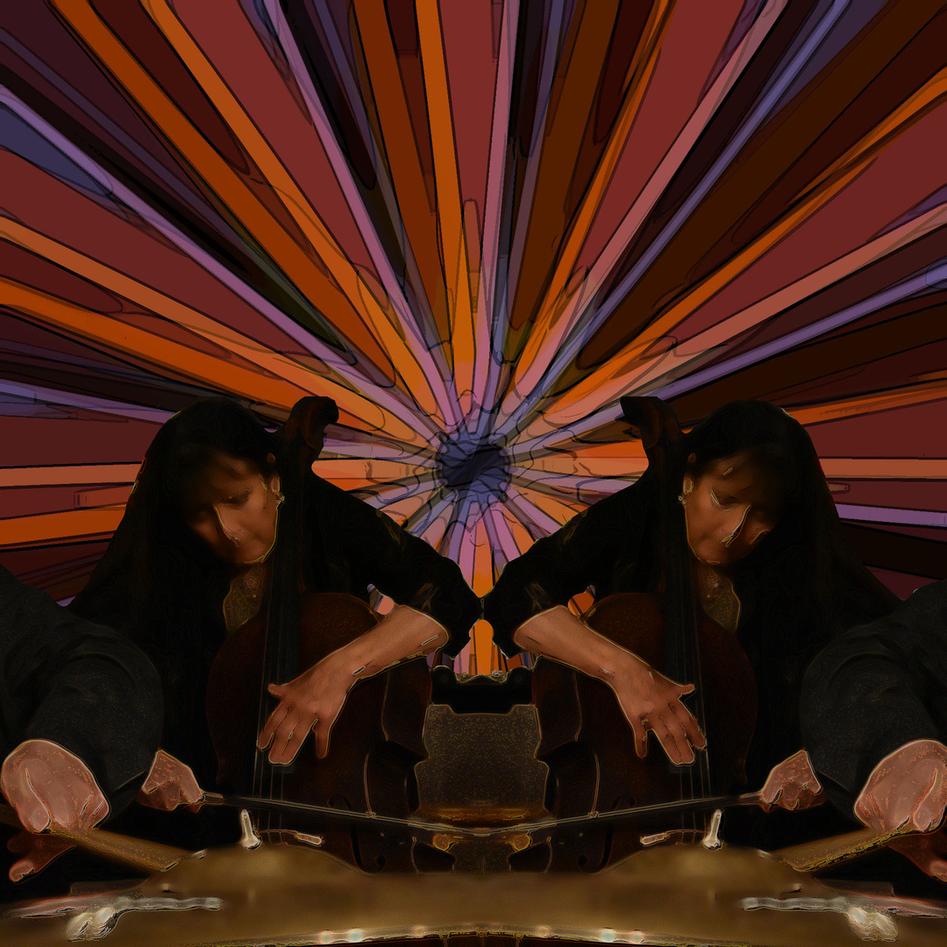 “… Things start our sparse and calm and build slowly towards more dense and heated passages. It sounds as if both string players were classically trained, hense this music has a controlled chamber-like quality. PEK often lays back to let the strings and piano fill up the sound so this doesn’t quite sound like other Leap of Faith offshoot sessions….  This is one the most laid back, yet still somehow enchanting of the many Leap of Faith offshoot projects.”

​
STRING THEORY With PEK / GLYNIS LOMON / ELINOR SPEIRS / ERIC ZINMAN - 3 of 9 Dimensions (Evil Clown 9215; USA) String Theory is PEK on clarinets, saxes, double reeds, wood flute, percussion, etc., Glynis Lomon on cello, acquasonic & voice, Elinor Speirs on violin & percussion and Eric Zinman on piano, inside & on the keyboard. String Theory is just one of the half dozen Leap of Faith offshoot projects that Dave Peck has organized and recorded. The two constant members are Leap of Faith constants: PEK (multiple reeds) and Glynis Lomon (cello). This quartet version also includes Elinor Speirs on violin and pianist, Eric Zinman. You most likely recall Boston area-based keyboardist, Eric Zinman from his work with Linda Sharrock, Ted Daniel and Francois Tusques. The set here was recorded live at Outpost 186 in Cambridge, MA in May of 2019, just a few months ago. This disc is superbly recorded, hence we can hear all four members in perfect balance. What is the tea-kettle-like whistle? Strings, rubbed piano and other strings?? Things start our sparse and calm and build slowly towards more dense and heated passages. It sounds as if both string players were classically trained, hense this music has a controlled chamber-like quality. PEK often lays back to let the strings and piano fill up the sound so this doesn’t quite sound like other Leap of Faith offshoot sessions. Even when Pek enters, he works well with the strings and piano, everyone listening closely, bending their notes together, taking their time to create a suspense-filled soundscape. PEK plays a bit of low end horns, like contrabassoon or bass sax, which match well with the strings. Ms. Lomon is a longtime member of Leap of Faith and can be found on perhaps 90% of their 100+ records. She is gifted cellist and gets a chance to stretch out here, but never hogs the spotlight. Ms. Speirs, whose name I’ve only seen on a few LoF sessions, also get a chance to add her own spice, changing the direction of the improv at times. Pianist Eric Zinman is an amazing free player who has been around for many years and deserves wider recognition. He too sounds nightly, adding sparse yet lines and bursts selectively throughout. This is one the most laid back, yet still somehow enchanting of the many Leap of Faith offshoot projects. 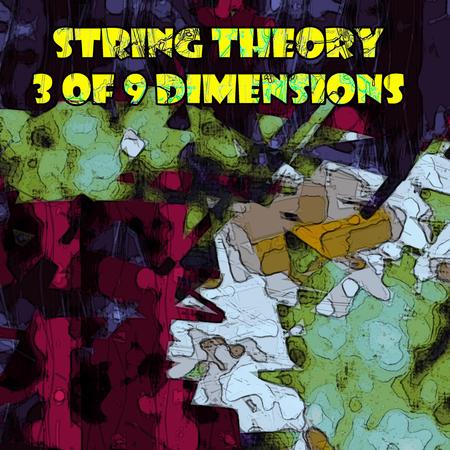