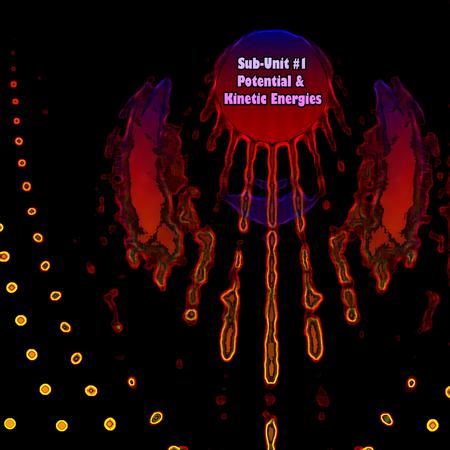 The Evil Clown Empire is comprised of the Leap of Faith Orchestra and its core unit, Leap of Faith, along with a number of other ensembles that feature different cross-sections of the Orchestra:  Turbulence features the horn players, String Theory features the String Players, Metal Chaos Ensemble features percussion and electronics, PEK Solo features my own playing, etc.   The individual bands do not have a fixed set of players, but instead have a central idea which focuses the palate of sounds available.  One of the projects (now dormant while I find a venue to replace Third Life Studios), Leap of Faith Orchestra & Sub-Units, features short improvisation by sections from the orchestra followed by an improv with everyone.  So, Evil Clown performances are credited to Sub-Unit No. “X” when a small format improvisation occurs by members of the orchestra which are not assignable to one of the regular ensemble names.

This set was originally planned to be Leap of Faith with myself & Glynis Lomon (cello) with special guest Eric Zinman on piano, piano interior, synth and percussion.  A couple of weeks before the performance, Glynis withdrew from this set due to a family event conflict.  Rather than invite more players to the session, we just changed the ensemble name from Leap of Faith to Sub-Unit No.1 and continued as a duet.

Eric has long ties to Leap of Faith.  He was one of the first improvisers in the Boston area that I played with after starting Berklee in 1989.  We played at his apartment in Jamaica Plain in a trio with microtonal trumpeter John Fugarino.  Eric has been around the Boston scene the entire time and we played periodically in the early Leap of Faith period throughout the 90s.  During the 00’s, when the demands of my day gig prohibited any meaningful musical activity, Glynis formed a trio with Eric and master drummer Syd Smart called New Language Collaborative which continues today.  After I emerged from my long hiatus in 2015, Eric has been a frequent Evil Clown ensemble contributor performing with Leap of Faith, Leap of Faith Orchestra, Metal Chaos Ensemble & String Theory.

This was an exciting set with Eric using piano, percussion and synth (often two at a time) arranged in a tight circle, while I used an array of horns, small percussion, Theremin and accordion.   Enough variety of instrumentation is available that the Evil Clown broad palate aesthetic is readily apparent.   Each of the two long pieces transforms often into new sonority, blending keyboard, percussion, electronics and woodwinds into a tapestry of developing texture.

"…  Commencing with what sounds like timpani and cymbals or gongs, with suspense-filled piano and synth sailing in. The music is superbly recorded and thoughtfully performed. Hard to believe that this is just a duo. As the duo move from instrument to instrument, they listen closely, interact with lines or dialogue going back & forth…”

"This "Sub-unit" from Boston's improvising Leap of Faith Orchestra presetns a duo between Eric Zinman on piano, percussion and synth and David Peck on an array of saxophones, clarinets, bassoon and other reeds, plus small percussion, Theremin and accordion, in a unique and active duo with both players suggesting a larger ensemble through diverse strategeis and instrumentation."

SUB UNIT #1 with PEK / ERIC ZINMAN - Potential & Kinetic Energies (Evil Clown 9235; USA) This is rare duo session from Leap of Faith founder, PEK on alto, tenor & bass saxes, clarinets, double reeds, sheng, melodica, gongs, theremin & assorted percussion plus occasional (more than a dozen releases so far) LoF member, Eric Zinman on piano & in its interior, synth, floor-toms & cymbals. Unlike many of the names in the Leap of Faith Orchestra, Mr. Zinman is a longtime part of the Boston-area avant/jazz scene and has worked with Linda Sharrock, Francois Tusques and Itaru Oki. This disc was recorded at Outpost 186 in Cambridge, MA on November 16 of 2019, a little over a month ago?!?

Commencing with what sounds like timpani and cymbals or gongs, with suspense-filled piano and synth sailing in. The music is superbly recorded and thoughtfully performed. Hard to believe that this is just a duo. As the duo move from instrument to instrument, they listen closely, interact with lines or dialogue going back & forth. Mr. Zinman is a master pianist, on a similar level to John Blum or Thollen McDonas, extraordinary but unsung and under-recorded. Zinman is in fine form here, sending out cascades of notes (both inside the piano & on the keyboard) before settling down while PEK moves through assorted reeds and percussion. There are a number of highlights here: a strong bass sax & piano duo explosion about 21 minutes in plus a good deal of spacious, slowly unfolding organic duos which keep switching instruments and dynamics throughout the long journey. Near 70 minutes long and consistently spirited and inventive throughout. - Bruce Lee Gallanter, DMG 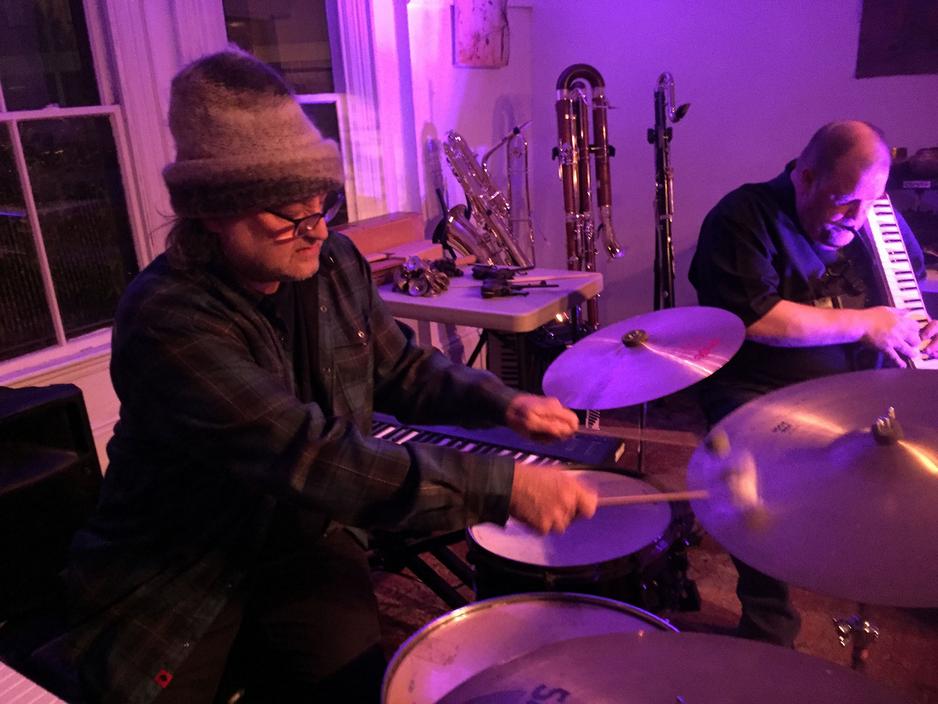 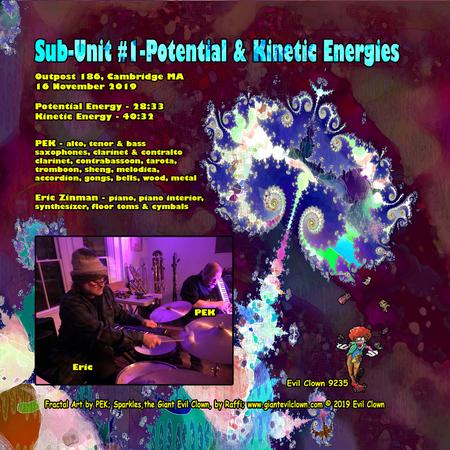 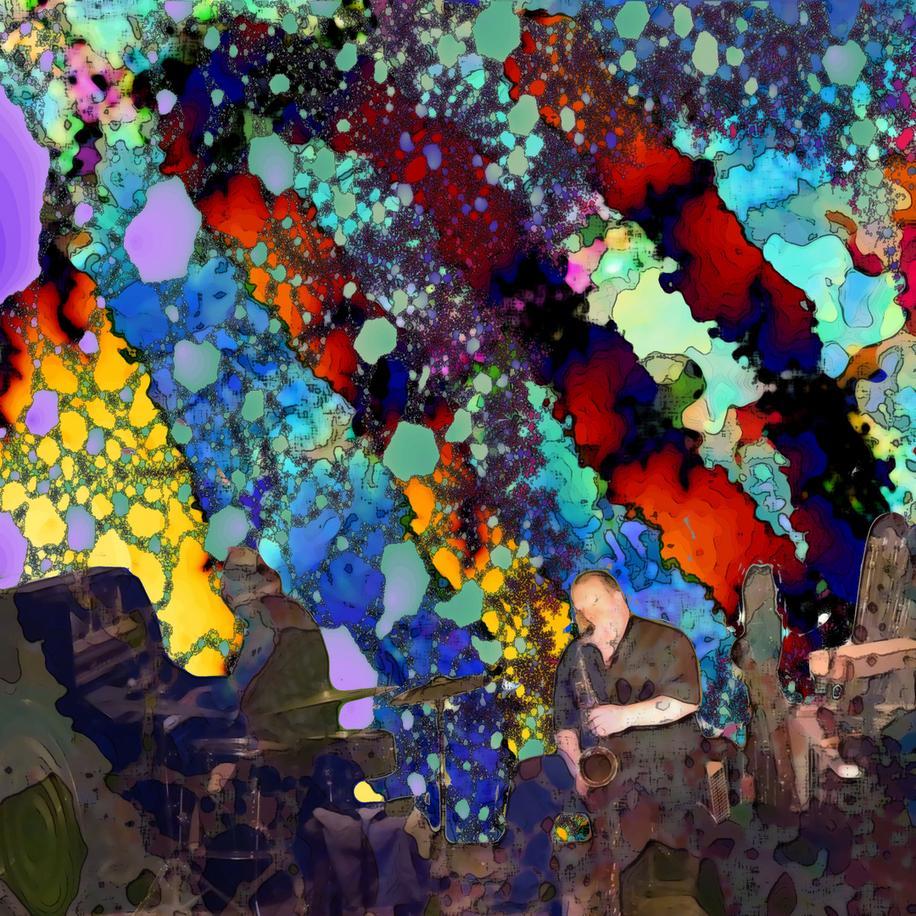