I formed Turbulence in 2015 as I started to assemble players for the Leap of Faith Orchestra. Turbulence, the extended horn section for the Orchestra (along with guests on other instruments), also records and performs as an independent unit. As if this writing in November of 2019, we have recorded just shy of 30 albums on Evil Clown with greatly varied ensembles. All of the smaller Evil Clown bands are really more about a general approach, rather than a specific set of musicians. A session gets credited to Turbulence when it is mostly horn players and the only musician on all of them is myself. The sessions range from an early duet with Steve Norton and Myself (Vortex Generation Mechanisms) to a 5 horn band with bass and two percussionists (Encryption Schemes) to four albums by the side project Turbulence Doom Choir which feature myself, multiple tubas, percussion, electronics and signal processing.

The Paroxysmal Attack album (3 November 2019) was intended to be the debut appearance of Bonnie Kane from western Mass. She is well connected with a scene in Holyoke that has a bunch of players unknown to us and she presents a monthly recurring concert that Leap of Faith performed at two days prior to this performance (The Thursday Night Experiment No. 38). Anyway, last Spring, Yuri and I had trekked from Boston down to Maryland for a Metal Chaos Ensemble gig at the Merry Pranksters promotion of Vermin Supreme for President… A real guy, look him up… Bonnie had come down and was performing with Urban Shaman Attack – the band who had invited us to the show. We got to talking and realized that we were only an hour apart, so I set up the Paroxysmal Attack set around her availability and added some horn players from the Evil Clown regulars.

Bonnie plays tenor sax and flute and uses her own real-time electronic manipulations on those sounds. Usually for a Turbulence set at ECH, we use horns and percussion and some electronics. Anyway, Bonnie had a nasty flu and was too wiped out for the travel and the session went on without her. We were both disappointed and immediately began work on rescheduling. We decided to invite her regular drummer John Loggia to join us and eventually we landed on 29 February for the set and I invited some of the regular horn players to join in. This was a great performance since Bob, Eric, Mike and myself have played together quite a bit in a variety of contexts, and Bonnie and John also have a long running history. In the past, I have found that when several players come to Evil Clown together things are often very interesting… Here we had a sextet comprised of a quartet and a duet, opening up lots of possibility for new interaction both between units and between individuals. 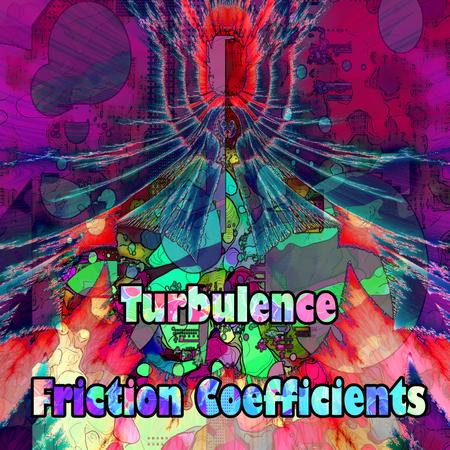 "... This session was live streamed to Youtube and recorded at Evil Clown Headquarters in February of 2020. This session sounds different from others from the Evil Clown vast catalogue. It is not just one continuous flow but more episodic.   ... This is relatively strong improv session but it doesn’t sound like the Turbulence of the past.

Saxophonist & flutist Bonnie Kane (W.O.O.) joins the Turbulence group, the extended horn section of the Leap of Faith Orchestra from Boston area collective Evil Clown led by David Peck (PEK), a concert that was live-streamed to Youtube during the Covid-19 Pandemic in February 2020, in a sextet with four reedists, two trumpeters, electronics, drums & extensive percussion.

“… This was a great performance since Bob, Eric, Mike and myself have played together quite a bit in a variety of contexts, and Bonnie and John also have a long running history.  In the past, I have found that when several players come to Evil Clown together things are often very interesting…  Here we had a sextet comprised of a quartet and a duet, opening up lots of possibility for new interaction both between units and between individuals....”

TURBULENCE with PEK / BONNIE KANE / BOB MOORES / ERIC DAHLMAN /  MIKE CAGILIANONE / JOHN LOGGIA - Friction Coefficients (Evil Clown 9243; USA) Turbulence features PEK on clarinets, alto & tenor saxes, contrabassoon, sheng, flute, game calls, malletkat, dax, etc; Bonnie Kane on tenor sax & flute; Bob Moores on space trumpet, synth, laptop, percussion; Eric Dahlman on trumpet & voice; Michael Caglianone on soprano & alto saxes, game calls & percussion and John Loggia on drums & percussive guitar and practically everyone doubling on electronics. Turbulence is one of several Leap of Faith offshoot projects with some 10 discs out under their name. The personnel changes from disc to disc depending on who is around. Besides PEK, longtime Leap of Faith drummer, Yuri Zbitnov is now retired from the various Evil Clown (label) ensembles. There are two new members on this disc, saxist Bonnie Kane, who used to be a downtowner and who has played with W.O.O. and World of Tomorrow, as well as working with Kevin Shea, Federico Ughi and Jeff Shurdut. I hadn’t heard much about the new drummer here, John Loggia, other than a trio disc I once reviewed with Blaise Siwula and Aron Namenwirth.

This session was live streamed to Youtube and recorded at Evil Clown Headquarters in February of 2020. This session sounds different from others from the Evil Clown vast catalogue. It is not just one continuous flow but more episodic. The sextet sounds a bit hesitant which makes sense since there are two new members.  At one point it sounds as if both trumpet players are playing a slower, more solemn jazz-like thing. Turbulence sounds like the wrong band name for this particular disc since there is quite a bit of recurring silence or space in between the occasional eruptions. Even in the short episodes, interesting combinations take place. Trumpet(s), percussion & electronics take off at one point then reeds, trumpet, percussion (bells & gongs) & electronics. This is relatively strong improv session but it doesn’t sound like the Turbulence of the past. - Bruce Lee Gallanter, DMG 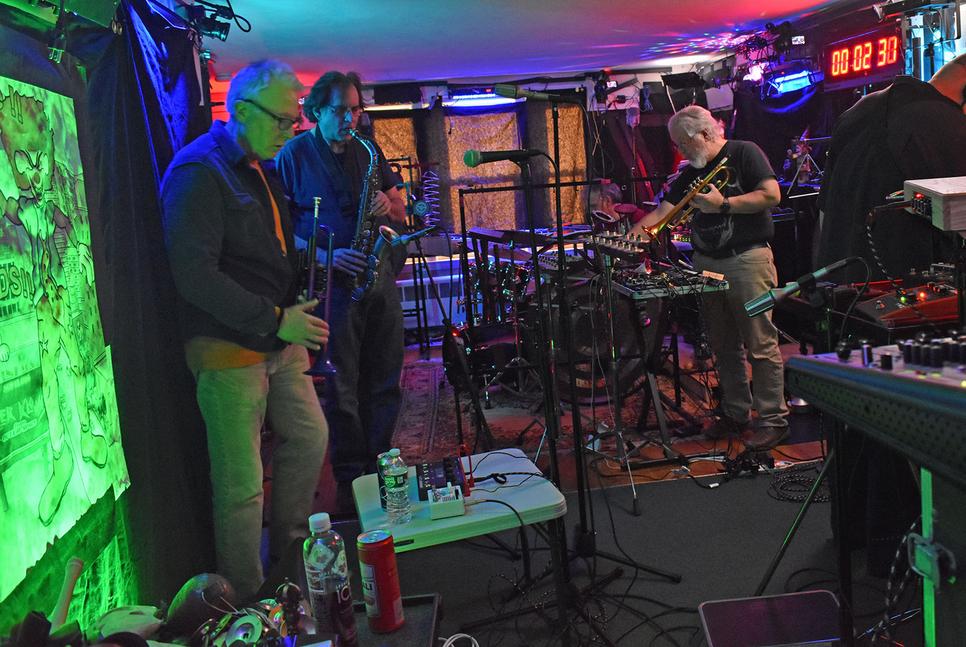 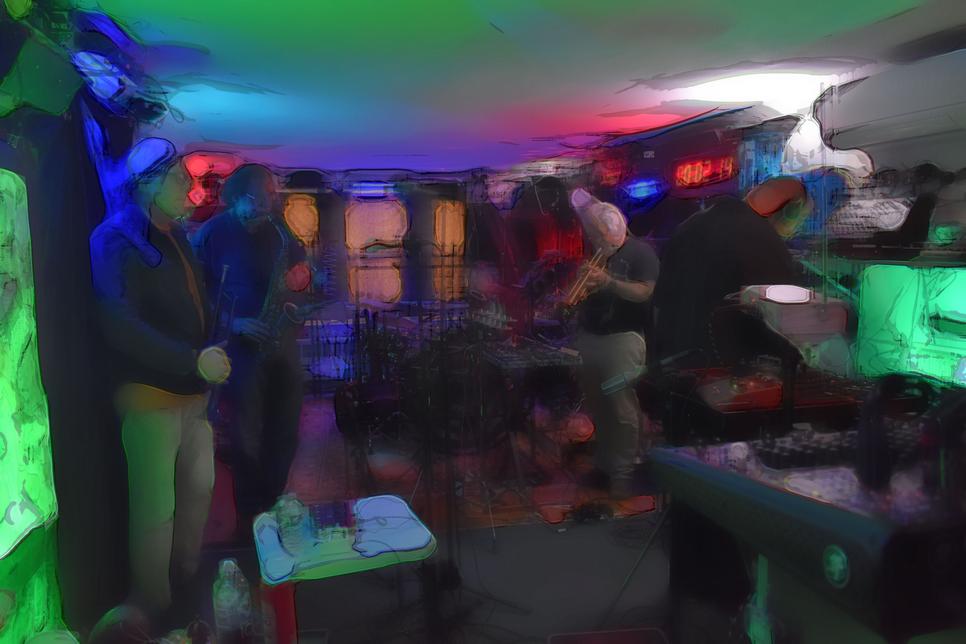 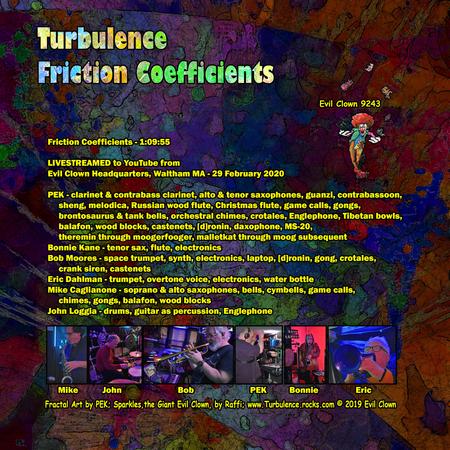