Turbulence is the horn players from the Leap of Faith Orchestra. We have performed a wide range of shows with ensembles ranging from duets to 8 or 9 players. Over half of our recordings are of ensembles comprised of horn players (many of whom play some of the Evil Clown percussion arsenal) but no drummer. Yuri, however, is on a number of the sets adding drum set to the horn band. We also had a special variation of this band, Turbulence Doom Choir, with PEK, Yuri and the tubas of Dave Harris and John Baylies and electronic signal processing until John split Boston for New York.

Here are some great links to Turbulence sets with Yuri at the drums!

These are the subproject, Turbulence Doom Choir, with PEK, Yuri + tubas

TURBULENCE with PEK / MIKE CAGLIANONE / YURI ZBITNOV - Son of Cosmocentric (Evil Clown 9228; USA) Featuring PEK on clarinets, saxes, English horn, flute, game calls, sheng, accordion & assorted percussion; Mike Caglianone on saxes, sheng, game calls & percussion and Yuri Zbitnov on drums, gongs, Malletkat/Moog, metal & chant. Word is that Leap of Faith core member, Yuri Zbitnov, will finally be retiring from the Evil Clown Empire of a half dozen or so Leap of faith & offshoot bands. Sad, but true as his drumming has always been a central rhythmic glue to holding these projects together. This current batch of six discs which arrived earlier this week (1/21/20), might just be his last batch. Turbulence is one of these ongoing LoF bands which is/are led by founder PEK, with Mr. Zbitnov as a key member. This is a trio version, which is smaller than most units and it includes a newer member, Mike Caglianone on saxes & percussion. This makes it easier to figure out who is playing which instrument at times. Commencing with mysterious, suspense-filled space, gongs, rubbed cymbals, a disembodied vocal-like sound floating in the distance and a variety of creepy vibes ascending. This music reminds me of the Art Ensemble of Chicago as it moves through different passages. One or two saxes take the central role while Mr. Zbitnov’s ever engaging drumming helps us the navigate the rapids of the cosmic river between different states of mind. Everything here moves in waves from calm to eruptive. Yuri is in particularly great shape here and take a few short amazing solos throughout this 70 minute endeavor. There is a section where Yuri get into a marching groove which also has some odd but effective spoken word vocals. “Underground race, we are the Power!” is what they might be chanting, but it is hard to tell. It doesn’t last very long but does work. How do the Leap of Faith and Turbulence crews continue to release so much great music…?!? Listen closely and find out.

“… Commencing with mysterious, suspense-filled space, gongs, rubbed cymbals, a disembodied vocal-like sound floating in the distance and a variety of creepy vibes ascending. This music reminds me of the Art Ensemble of Chicago as it moves through different passages….  How do the Leap of Faith and Turbulence crews continue to release so much great music…?!? Listen closely and find out…
- Bruce Lee Gallanter, DMG

Turbulence Cosmocentric Edition, the extended horn section for the Leap of Faith Orchestra with the core of PEK on winds & percussion, Yuri Zbitnoff on drums & percussion, plus guest Michael Caglianone on saxophones, sheng, game calls and percussion, in an extended piece that holds reflections of Sun Ra's work through powerful rhythms and diverse and unusual instrumental passages. 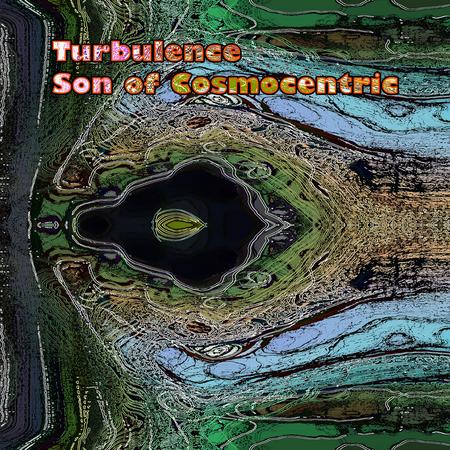 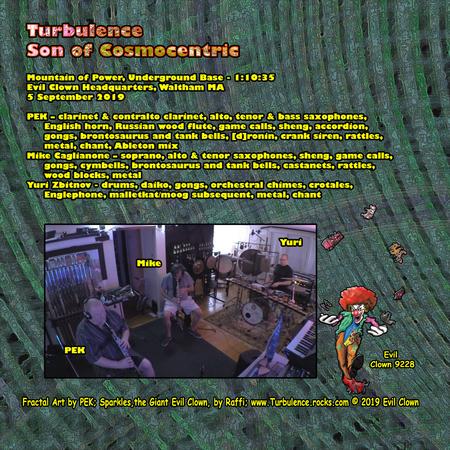 July’s Outpost 186 show was originally advertised as Leap of Faith. However, there was some scheduling confusion and Glynis did not have the date in her book for some reason. One of the advantages of the broad palate pure improvisation approach is that if one of the players happens not to make it the show can and does go on without difficulty. However, the band name Leap of Faith is only used when Glynis is present, so the ensemble is Turbulence, the wind instrument (sometimes with percussion) branch of the Leap of Faith Orchestra. In the Evil Clown nomenclature, the band names broadly apply to the general approach of the ensemble, rather than to a fixed list of performers.

The newcomer for that show, making his Evil Clown debut on The Conception of Sense session, is Michael Caglianone, a woodwinds player who has been around the Boston Improv scene forever, although we had never before encountered each other. He had a recording studio for a long time and recorded area notable free-scene players like Joe Manieri and Joe Morris as well as Glynis and others more directly involved with Evil Clown. He also had a long running improv band called the Zen Bastards that I knew of but somehow never encountered in person. Recently, Mission Creep, the rock (atomic punk go-go jazz) band of Greg Grinnell that Yuri and I play in, had a big performance on a bill with some great other bands – Rabbit Rabbit Radio (with the amazing violinist Carla Kihlstadt) and Cheer-Accident from Chicago. Anyway, Yuri recruited Mike to come on board Mission Creep for that show, making a three horn line up of that band for the first time since Steve Norton left us for graduate school in Maine. We both really enjoyed playing with each other and I immediately recruited him for Evil Clown. The Conception of Sense set was fantastic and I immediately made moves to schedule some more performances with this small format Turbulence ensemble.

In the 90s, Yuri and I played with the great sax player Raqib Hassan in a number of settings, including Cosmocentric Trio (two saxes & drums). Of course, this is the same base instrumentation as this new trio format, and during The Conception of Sense Yuri busted out the Sun Ra Saturn chant which was a staple of The Cosmocentric Trio! In Tribute to Raqib, we present the Turbulence Cosmocentric Edition – Son of Cosmocentric.

So, this outing is the second trio Turbulence set by this exact band. The Conception of Sense was performed at the Evil Clown monthly residency at Outpost 186 which is a small room – I usually bring a van full of stuff, but I am selective based on how many and which players will be there. Evil Clown Headquarters is much bigger, and especially for a smaller ensemble, there is much more room for instruments. Both environments have their advantages – OP186 forces us to select a narrower more specific pallet, which leads to sets with longer, more similar sounding sections, while ECH allows a much broader pallet including the heavy percussion instruments and electronics, which leads to shorter, more diverse sonorities, higher transformation rates, and more dramatic development. Check out both new albums to see the birth of a new variation of the Turbulence ensemble!! 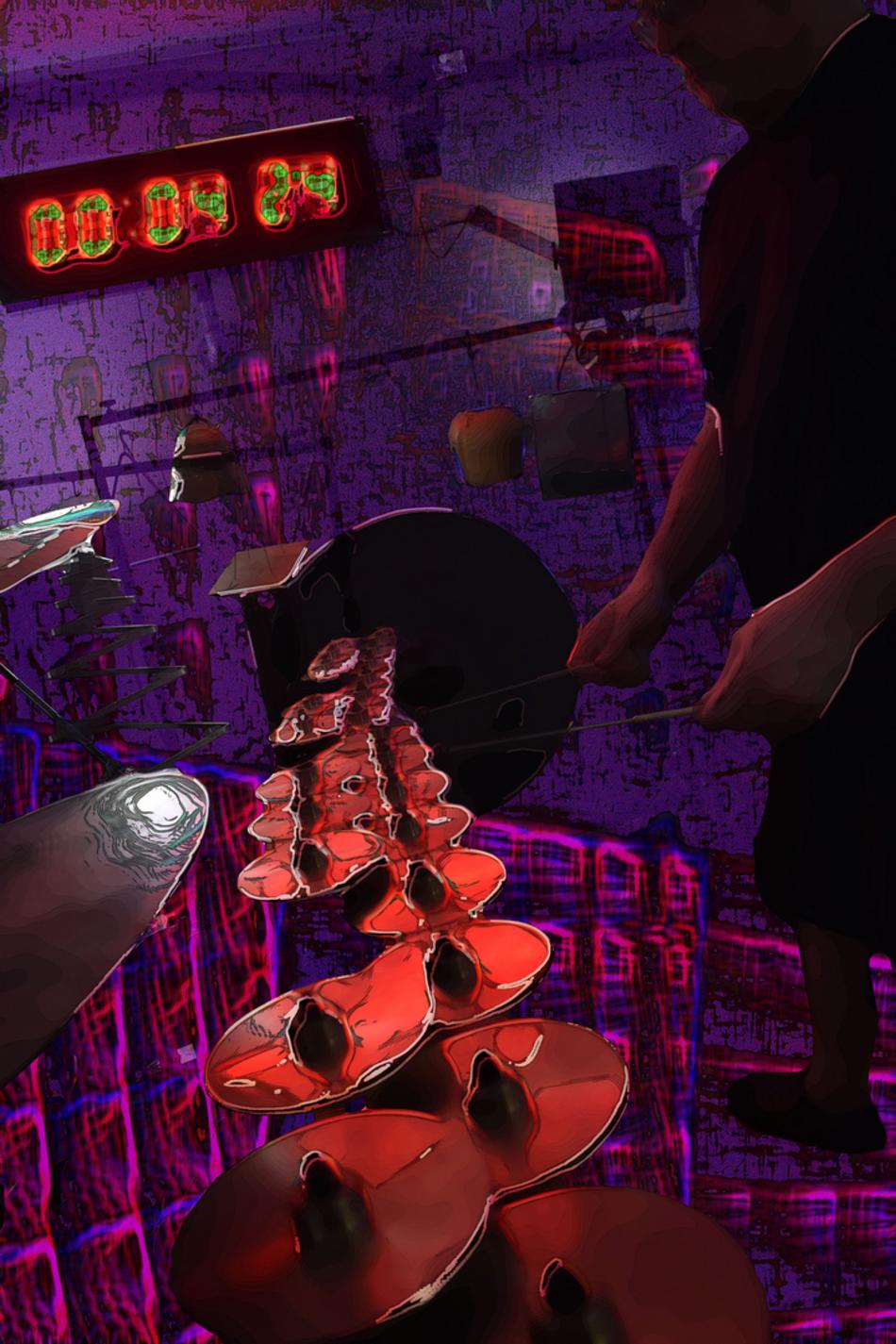