Turbulence - The Conception of Sense 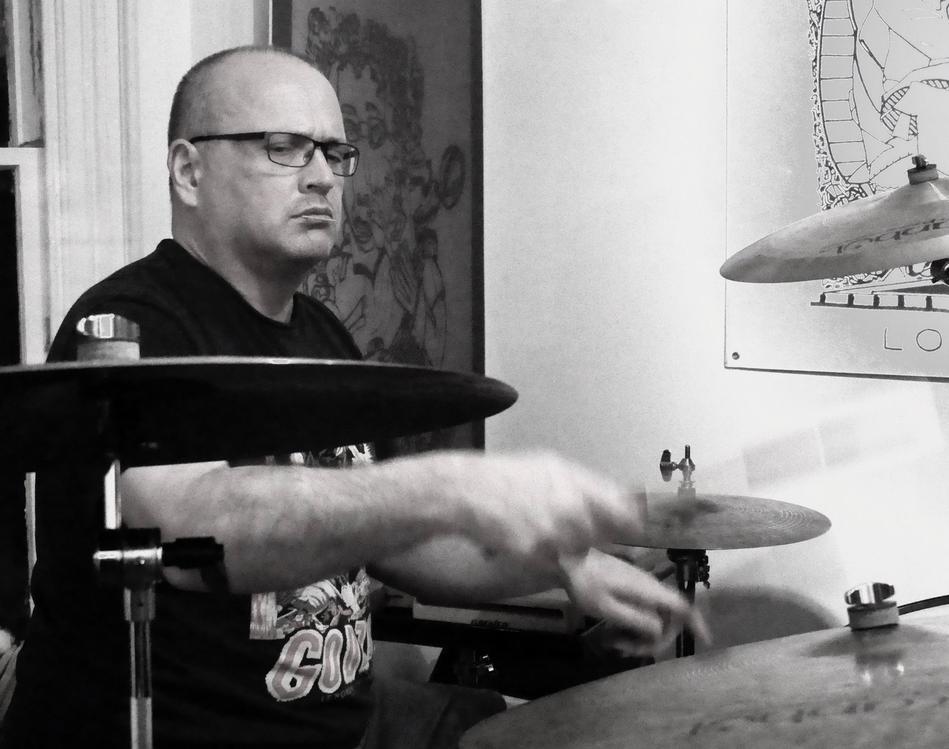 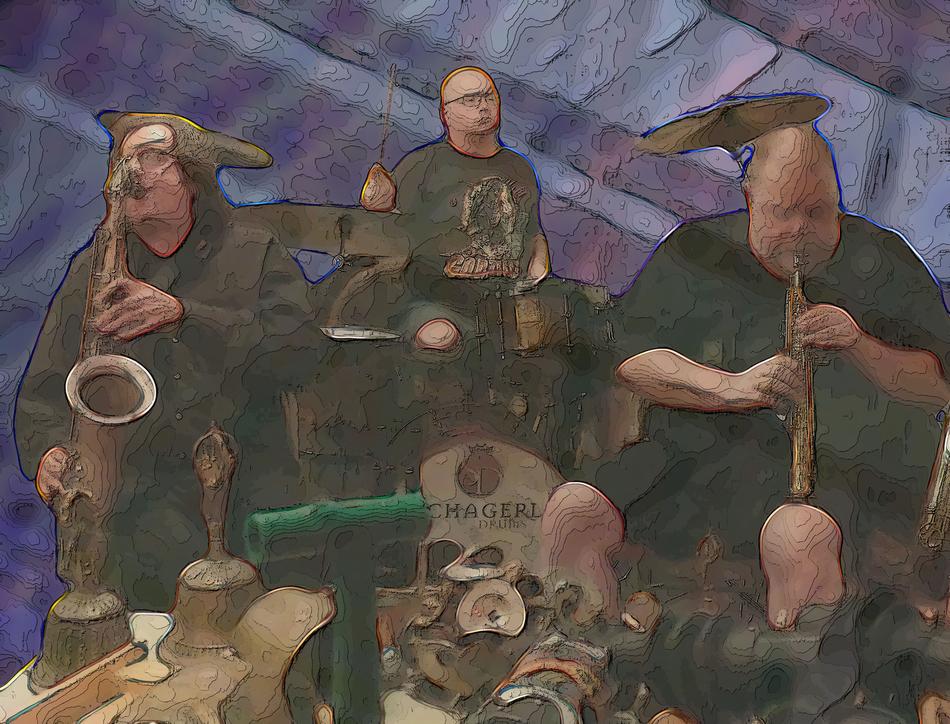 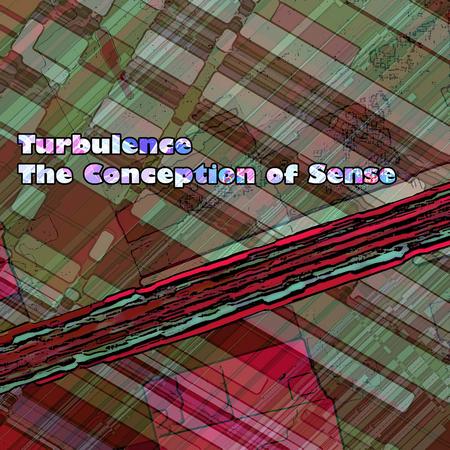 This performance was originally advertised as a Leap of Faith show. However, there was some scheduling confusion and Glynis did not have the date in her book for some reason. One of the advantages of the broad palate pure improvisation approach is that if one of the players happens not to make it the show can and does go on without difficulty. However, the band name Leap of Faith is only used when Glynis is present, so this performance is by Turbulence, the wind instrument (sometimes with percussion) branch of the Leap of Faith Orchestra. In the Evil Clown nomenclature, the band names broadly apply to the general approach of the ensemble, rather than to a fixed list of performers.

The newcomer, making his Evil Clown debut on this session, is Michael Caglianone, a woodwinds player who has been around the scene forever, although we had never before encountered each other. He had a recording studio for a long time and recorded area notable free-scene players like Joe Manieri and Joe Morris as well as Glynis and others more directly involved with Evil Clown. Recently, Mission Creep, the rock (atomic punk go-go jazz) band of Greg Grinnell that Yuri and I play in, had a big performance on a bill with some great other bands – Rabbit Rabbit Radio (with the amazing violinist Carla Kihlstadt) and Cheer-Accident from Chicago. Anyway, Yuri recruited Mike to come on board Mission Creep for that show, making a three horn line up of that band for the first time since Steve Norton left us for graduate school in Maine. We both really enjoyed playing with each other and I immediately recruited him for Evil Clown and scheduled him for this performance.

The next Frame Notation Score, Systems of Celestial Mechanics, by PEK will feature game calls in several places. Everyone in the ensemble will need one or more... In the last several months I have made a pretty good start at the collection I will need for the performance next year. I brought the hole batch with me for this performance and Mike and I both used them quite a bit. I’ve had 8 or 10 game calls in the auxiliary instrument set for several years now, but this new set now possesses a far wider array of sounds. I'll use these for a while so I can learn their range and then pick up some more before the performance of SCM... 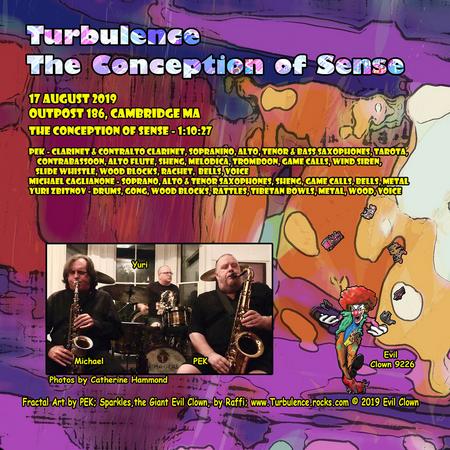 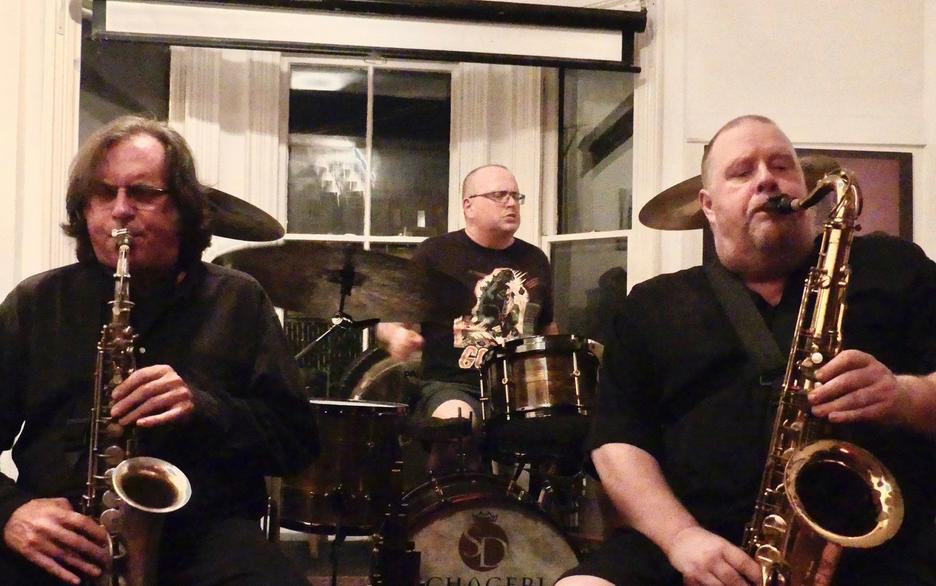 TURBULENCE with PEK / MICHAEL CAGLIANONE / YURI ZBITNOV - The Conception of Sense (Evil Clown 9225; USA) Turbulence features PEK on clarinets, four saxes, tarogato, contrabassoon, flute, sheng, melodica, game calls & percussion; Michael Caglianone on soprano, alto & tenor saxes, sheng & game calls and Yuri Zbitnov on drums and assorted percussion. Turbulence is just one of a half dozen Leap of Faith offshoot projects, with now around a dozen discs under that name. This version of Turbulence is just a trio with the two core members: PEK and Yuri Zbitnov (who is just about to retire from LoF). Being a trio with mostly two reeds and drums, makes it easier to figure out who is doing what. This disc starts with just cymbals or gongs and melodica, which sound like the soundtrack to a haunted house film. Slowly, both saxes and drums start to build from a modest intro. Both reedsmen take their time and play one thing one thing at a time, tenor & bass saxes, clarinets, game calls, all utilized just right as this disc unfolds. Instead of pushing too hard and steering the rhythmic flow, Mr. Zbitnov, holds back a bit to set both reeds shine, interweaving their lines, creating a fascinating, ongoing dialogue. As Mr. Zbitnov slowly ascends, he starts fanning the flames of both reeds players, they start spinning out several layers of lines. There is a strong sense of spaciousness and calm at the center of this long disc. A most impressive yet somewhat modest gem.

“…Mr. Zbitnov, holds back a bit to set both reeds shine, interweaving their lines, creating a fascinating, ongoing dialogue. As Mr. Zbitnov slowly ascends, he starts fanning the flames of both reeds players, they start spinning out several layers of lines. There is a strong sense of spaciousness and calm at the center of this long disc. A most impressive yet somewhat modest gem.”​

​Turbulence, the wind instrument and sometimes percussion branch of the Leap of Faith Orchestra is represented by leader and composer David Peck (PEK) on winds, reeds and percussion, and Yuri Zbitnoff on drums and percussion, with saxophonist Michael Caglianone joining and also performing on bells, as they perform an extended framework composition from PEK.