​
TURBULENCE with PEK / BOB MOORES / ELLWOOD EPPS / MIKE CAGLIANONE / JIM WARSHAUER - Upheavel (Evil Clown 9234; USA) This version of Turbulence features PEK on clarinets, saxes, tarota, tromboon & melodica; Ellwood Epps & Bob Moores on trumpets; Jim Warshauer on tenor sax, flutes & shenai and Mike Caglianone on soprano, alto & tenor saxes. This was recorded at the Suddenfest Improvisation/Experimental Festival in Dorchester, Mass in November of 2019, just two months ago. Recent news from the monthly Evil Clown Newsletter is that longtime Leap of Faith drummer, Yuri Zbitnov, is retiring from the ongoing, ever-evolving sea of related ensembles. Bad news for us fans since his playing was often the central, rhythmic navigator. Although Mr. Zbitnov appears on only half of the 10 Turbulence discs, his presence in the future will be greatly missed.

Hence this version of Turbulence is mainly a reeds and brass quintet. I admit that I am partial to all woodwind ensembles since they are rare in improvised settings. The quintet ranges from modern classical careful, subtle sounds to the occasional explosive moments. There is a strong balance of space & music here, from duos or trios to four or all five members, no one overplays, everyone listens closely. This music is so focused and well-played that it sounds like some of that more challenging written modern chamber music. Superb!

Here are a bunch of links to horn player only editions of Turbulence. All players on these albums have horns as their primary ax, but most also play percussion and other auxiliary instruments

Review Excerpt by Bruce Lee Gallanter
“…  The quintet ranges from modern classical careful, subtle sounds to the occasional explosive moments. There is a strong balance of space & music here, from duos or trios to four or all five members, no one overplays, everyone listens closely. This music is so focused and well-played that it sounds like some of that more challenging written modern chamber music. Superb!”
- Bruce Lee Gallanter, DMG

"Turbulence is a smaller grouping of the Boston-based Evil Clown collective, typically with a majority of horns, here as the quintet of PEK (reeds & winds), Ellwood Epps (trumpet), Bob Moores (trumpets), Jim Warshauer (sax and winds), and Michael Caglianone (saxophones), a fully acoustic group of wind instruments and brass, taking a chamber approach to distinctive improvisation." 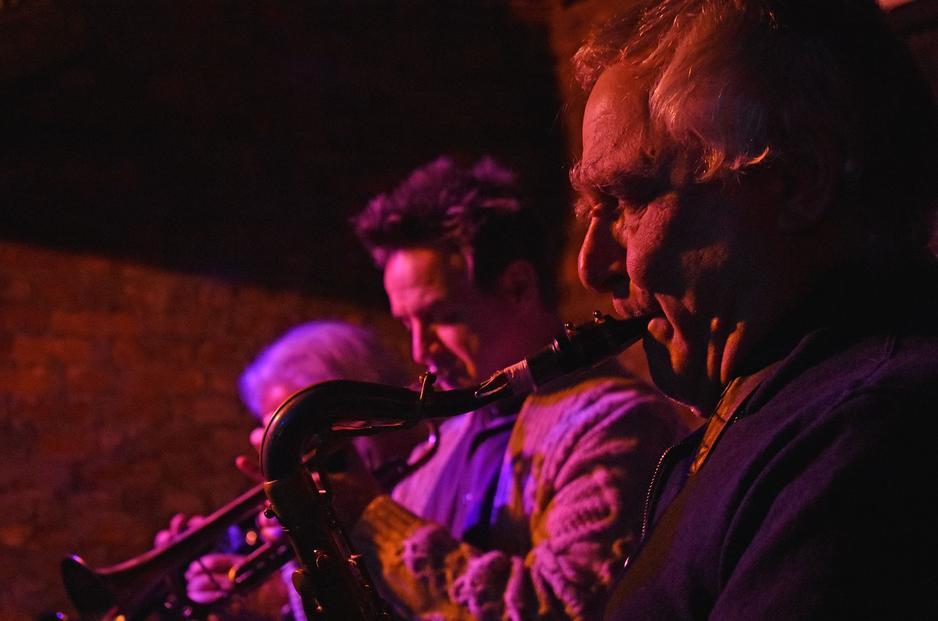 I formed Turbulence in 2015 as I started to assemble players for the Leap of Faith Orchestra. Turbulence, the extended horn section for the Orchestra (along with guests on other instruments), also records and performs as an independent unit. As if this writing in November of 2019, we have recorded just shy of 30 albums on Evil Clown with greatly varied ensembles. All of the smaller Evil Clown bands are really more about a general approach, rather than a specific set of musicians. A session gets credited to Turbulence when it is mostly horn players. The only musician on all of them is me. The sessions range from an early duet with Steve Norton and Myself (Vortex Generation Mechanisms) to a 5 horn band with bass and two percussionists (Encryption Schemes) to four albums by the side project Turbulence Doom Choir which feature myself, multiple tubas, percussion, electronics and signal processing, and many other settings.

In the Boston improvisation scene there are a number of ensembles with connections to Evil Clown where some members have participated in one or more of our projects. One of these bands is Fable Grazer (lead by Mark Drinkwater) where I recruited regulars Bob Moores (trumpet, guitar and electronics) and Eric Woods (modular analog synthesizer). Metal Chaos Ensemble played a few times at a series organized my Mark a few years back. Anyhow, a month or so ago, Mark reached out saying that he had organized Suddenfest, an all-day festival of improvised and experimental music.

I decided to bring Turbulence which is quick to set up and requires less equipment than the other Evil Clown ensembles...  more appropriate for the festival setting which requires quick change overs between bands. I have been looking for a session to get both Jim Warshauer and Mike Caglianone together with me in the reeds section. Jim has been participating in Evil Clown sessions for a bit over a year. Mike has been around for a few months, but already done 4 sets. I knew that the three of us would make an excellent reed section since I have played with each a number of times. All three of us share a phrasing-oriented approach to improvisation which naturally results in a great deal of motivic exchange. Bob Moores rounds out the planned quartet.

Another band with deep connections to Leap of Faith is Glynis Lomon’s trio, New Language Collaborative, with Syd Smart (drums) and Eric Zinman (piano). My history with all three of these amazing musicians dates back to the early 90s, but Glynis and I have played together since that time (except during my long hiatus in the 00s) in Leap of Faith. NLC has Ellwood Epps (trumpet) as a frequent guest, despite the fact that he lives in Canada. He is often in the Boston area and has performed a bunch of times with NLC. NLC was directly before us in the lineup and I was delighted that Ellwood was in on their set. We had never met before, but I had heard his playing on NLC recordings. After their set I asked Ellwood if he would like to join our set. Turned out great! And the band was a bit more balanced with two brass and three reeds.

Typically, all Evil Clown ensembles utilize a very broad pallet with each musician playing small percussion and other instruments in addition to their regular axes. I elected to do this performance with only wind instruments – none of the percussion, electronics, or any of the other auxiliary instruments are used. This was an unusual choice for us, but I was delighted with the result, and I am likely to revisit this idea in future Turbulence performances… 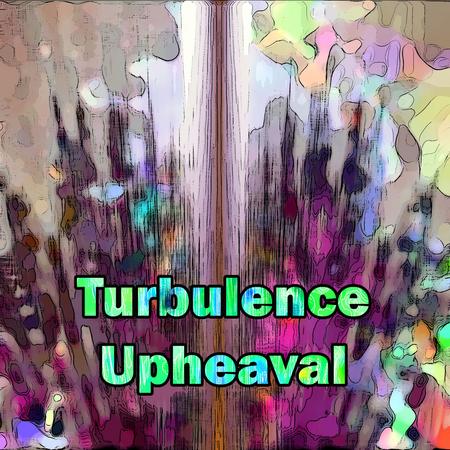 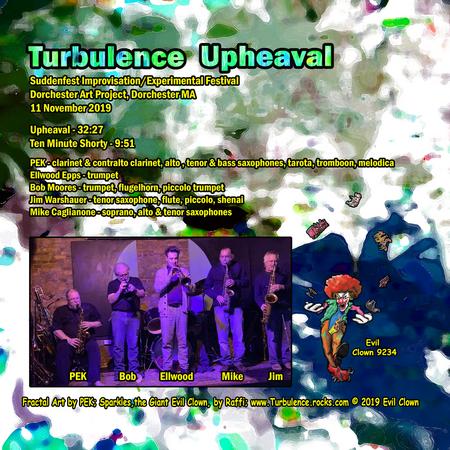